Obvious highlights include world championships won by Gee and Rachel in Val di Sole in 2008. That same year, during the Vallnord World Cup, on COMMENCAL’s home turf, Gee and Rachel dominated the DH while Dan, the eldest of the three, won the 4X final. A truly epic weekend, almost beyond belief.

From Mike McCormack himself:

That’s right, Single Speed Stage Race World Championships. To be honest, we sort of designated ourselves. But that’s OK. It’s not like the UCI has been spending a lot of time preserving the soul of our sport (reference: 4X, dual slalom, disc brakes in ‘cross, UCI approval stickers for frames/components, video rights debacle, et MF cetera). Custom SS frame and pastel-hued SSSRWC jersey to the victors.

Online sales: past, present or future?

Two interesting announcements this week regarding online bike sales. For years online retailers have been taking a larger and larger piece of the pie in accessories, apparel and components. Now the industry is faced with deciding when, if, or how to sell complete bikes online.

You know what I like about autumn? Beer and Pie. The leaves are nice too.

What do you want to learn about photography?

I’m busy writing a “Dirt Rag Guide to Mountain Bike Photography” article for issue #161, hitting the newsstand in February 2012, and would like to ask you, our fair readers, to weigh in with your photographic questions, concerns and advice.

I’ll admit to being one of the skeptics when the original Crossmax wheels came out with aluminum spokes. “That couldn’t work, could it?” Well after plenty of years and miles, Mavic’s Zircal aluminum spokes have proven themselves to be plenty durable. I tested the ST wheelset, aimed at the trail bike market.

Already the most popular action sports camera on the market, GoPro has upped the ante with a complete redesign of its popular HERO video camera.

In for test: Turner DHR

We first laid eyes on Turner’s dw-link equipped DHR back in 2008 when Turner showed a prototype at Interbike where the DHR immediately struck a cord with me. The design looked purposeful, with it’s low-slung swingarm and CNC machined shock tower cradling the rear shock low in the frame for mass centralization. The prototype had major sex appeal, and I’m happy to report the production version of this bike is even sexier. Here’s the prototype from 2008:

The Cadent, along with its female counterpart the Alysa, make up the “Performance Hybrid” portion of Raleigh’s on-road lineup. These bikes fit squarely between Raleigh’s road bikes and their more casual, more comfy, less sporty hybrids.

Countless hours spent surfting the web once again pay off, in this case by spotting a beautiful unveiling of a prototype of Lenz Sport‘s new Mammoth 29er platform. 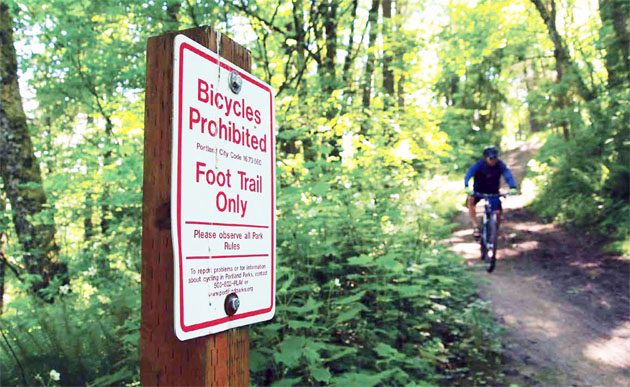 By Greg Galliano and Melanie Strong

Born and bred in Anchorage, Alaska, FatBack knows a thing or two about snow bikes. In a continued effort to bring as much of its manufacturing to the USA as possible, aluminum frames now join their steel and titanium counterparts in domestic production.

Just in time for winter: the Moots FrosTi snow bike

They’ve built a few prototypes and show bikes in the past, but this fall the Moots snow bike will enjoy a full – albeit small – production run.

The FrosTi (one of the best names ever – Ed.) is built around the quickly standardizing collection of fat bike parts out there, including a 44mm head tube, 100mm bottom bracket, and 170mm rear spacing. The $3,975 frame is designed around the 135mm Salsa Enabler fork.

SRAM pulled the wraps off four new wheels this week: The Rise 60 with carbon rims and the Rise 40 with aluminum rims. Each version is available in 26-inch or 29-inch versions.

As mountain bike component standards inevitably evolve, it comes as no surprise that builders would begin incorporating new technologies into their products. Mike Ahrens of Ahrens Cycles blogged this week about developing a hooded fork dropout for 15mm QR.

As one of my local mountain bike heroes once said: "It’s all about tires and tire pressure." While that may be an over-simplification of a complicated sport, there’s no doubt that mountain bike magic happens at your tire’s contact patch.

This year at Interbike I roamed the floor, looking for the latest and greatest MTB and CX tire offerings. I found a rack-full of interesting choices. Below are ten tires that tickled my fancy.

Velocity’s new 29” Blunt SL Pro wheelset is handbuilt in Grand Rapids, MI. They’re marketed as a race day wheel, because the 1,565g weight is comparable to other “racing” wheelsets. I used them as my primary wheels for optimal trail mileage during the test.

Read Part 1 of our report on Specialized and 29ers.

Manic Mechanic – With derailleurs and bottom brackets, size does matter

In need of technical assistance? Send your questions to editor@dirtragmag.com. Please include "Manic Mechanic" in the subject line.

I need to replace my rear derailleur. What are the differences between the short/medium/long cage? Does the length of the cage matter that much?

Printing in 3D might not be a new technology, but we just saw this amazing video of how Trek has put it to use in their prototype and R&D facitilities to cut the turnaround time for new parts from weeks to just hours.

For example, the backlog on their CNC facility is running 28 days, but the designers in this video can build a prototype rocker arm in just a few hours. The machines are even capable of building objects with moving parts and from two different materials, as you can see in the second video.

My first impression? This Periwinke blue is really striking. Powdercoat, yep. Environ-Mentally better than spray paint, too. I have gotten a number of positive comments from passersbys.

Steve Jobs and the founding of Dirt Rag

Just a word on where we came from…

Words and photos by Adam Hunt

You may have never heard of Paragon Machine Works. That’s okay, they’ve probably never heard of you either. Chances are if you’ve purchased a bike from a custom frame builder, you are already using some of their products.

Catching up with Chris Sugai

Tubeless. You’re either in or you’re out. Like the hardtail vs. full-squish, 26” vs. 29” or Shimano vs. SRAM debates, there is no right or wrong side to take; it all depends on your needs.

My needs being what they are, I’ve been a slow adopter of the tape-and-sealant movement, but the latest rim designs and tires designed specifically for tubeless setups led me to finally dip my toe into that pool.

Founded in 1999, Spot Brand bicycles out of Golden, Colorado, makes beautiful, no-nonsense bikes for going fast. When my bright green Rocker SS tester showed up at HQ I couldn’t wait to get it out and get it dirty.

Thomson is not known for being an innovative component manufacturer. They stick with what they know and make bomber products. Much like the Model T, you can get Thomson’s stems and seatposts in any color, so long as that color is black…or silver. But now, times are changing.

Rim and wheelset manufacturer NoTubes was showing off three new rims at this year’s show.

Intense has long been known and respected for their domestically produced bikes. When Intense decided to build a carbon bike, they invested time and resources pursuing domestic carbon manufacturing, but found they simply found that route to be cost prohibitive. All Intense carbon bikes will be produced overseas, while dropouts, suspension links and other detail parts will be made stateside.

This Y wrench has a 4, 5 and, instead of a 6mm hex, it has T25 Torx head for this increasingly common fastener. The handles of all of Park Y wrenches have been enlarged for better ergonomics.

We covered New Zealand company Freeload’s first rack, the Sport Rack, back in Issue #150 where Karen simply lashed dry bags to the top of the rack. Since then, Freeload has launched their Tour Rack and Side Frames to greatly increase pannier compatibility.

‘Demo’ is not short for ‘Demolition’ – Carbon carnage inside

Not every bike made it back into the demo truck after the Interbike Outdoor Demo days. This carbon fiber Felt 29er was one such unlucky victim. Get the story here.

Part of me thinks I’m secretly Canadian. Not only do I always enjoy visiting our friendly neighbors up north, I also without fail enjoy riding their bikes. Case in point, the Norco Truax.

(East Coast mud not included in the MSRP)

The Scapegoat is currently Diamondback’s longest travel bike, at least until the downhill bike they’ve got in the works makes it into production. The Scapegoat started life in 2009 with a mid-level parts pack, 160mm fork, 68-degree head angle and a Hammerschmidt. The 2012 version is running a high end XTR/Saint/Easton Haven spec, 180mm Fox 36 fork, 66-degree head angle and single ring with chain guide. Burly.

Putting the Gnar! in narwhal: A Lesson in T-shirt design

Most folks aren’t aware of the growing population of aquatic mammals riding gravity inspired bikes in the far north. In fact, it’s laughable to think that such practices even happen, even on a practical level. How would aquatic mammals equip themselves for such exploits? Wouldn’t the components rust or freeze? Whales don’t even have legs, how are they going to pedal a bike?

Editor’s note: As the Mountain Bike Forum, we welcome readers; writing, race reports, poems, essay, even artwork. Got something you’d like to share? Send it to editor@dirtragmag.com.

Mavic has added helmets to its growing line of cycling apparel. The three new lids are based around a common design with different construction details and price points.

Every September 22, people from around the world get together in the streets, intersections, and neighborhoods to remind the world that we don’t have to accept our car-dominated society.

This site is an independently-operated mirror and is not affiliated with Dirt Rag, Rotating Mass Media or any of its subsidiaries. No copyright is claimed for any content appearing herein.