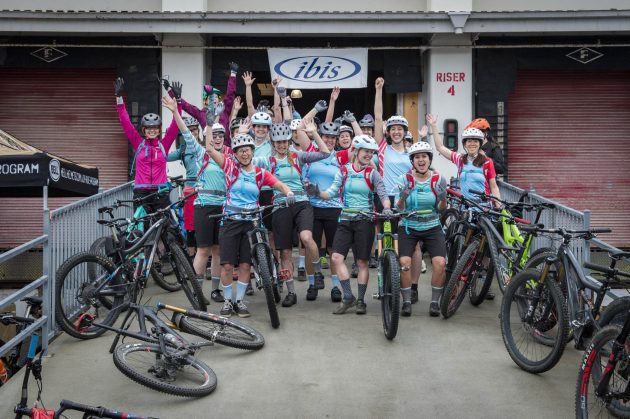 A community is a village, a town or a city, but a sense of community is not defined by proximity. It’s the nurse and the lawyer, the photographer, designer and the park ranger; it’s the social media specialist, the bike shop salesperson and the mom all pursuing a common goal.

A few years ago Jessica Klodnicki, Bell Helmet’s executive vice president and general manager, found herself standing alone at a bike shop. She’d expected to join a scheduled group mountain bike ride but no one else showed up. Ultimately, she made her connection, but the experience wasn’t what she’d hoped for. As a relatively new rider, she was looking for a group ride that was committed, organized and fun; she was seeking community.

If you mountain bike, you’ve likely heard a friend say, “I really want to start mountain biking, but…”

Fill in the blank: I don’t have a bike; I can’t afford a bike; my bike doesn’t fit; I don’t know what to look for in a bike; I don’t know the trails; I don’t have anyone at my level to ride with; I’m afraid to join a ride. And so on. These are huge hurdles associated with mountain biking. Whether the reason is social, economic or psychological, the barriers seem to be just a little bit bigger for women. 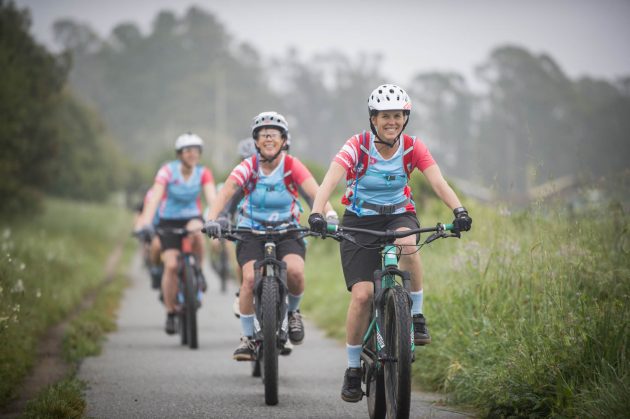 To mitigate some of these challenges and grow the sport of mountain biking among women, Bell Helmets has implemented the Joy Ride Ambassador Program. Historically, Bell has been perceived as a masculine company, but Joy Ride aims to open doors to the female consumer.

The program is motivated by and modeled after Girls Rock, a Santa Cruz all-women’s mountain bike group founded by Klodnicki not long after that lonely morning at the bike shop. With her tireless dedication and passion for the sport, an eager following of burgeoning and advanced female riders, and the support of the ever-present Santa Cruz bike industry, Girls Rock has grown from merely four women to 400 since the spring of 2014.

“It showed us that there was a real need for women of all levels, everything from beginner to advanced to come together and have the opportunity to ride,” said Klodnicki.

I spent this past weekend observing the Joy Ride kickoff with Bell’s Ambassadors and had the pleasure of meeting many of the Girls Rock members at social events. There was a unanimous wave of excited chatter about what has developed from four ladies in a parking lot.

As an outsider, I could see and hear the joy throughout the room. Girls Rock was certainly born out of desire and drive. Perhaps Klodnicki’s personal hurdles are what gives this program its energy. She wanted someone to ride with; she assumed other women did as well and she made it happen. 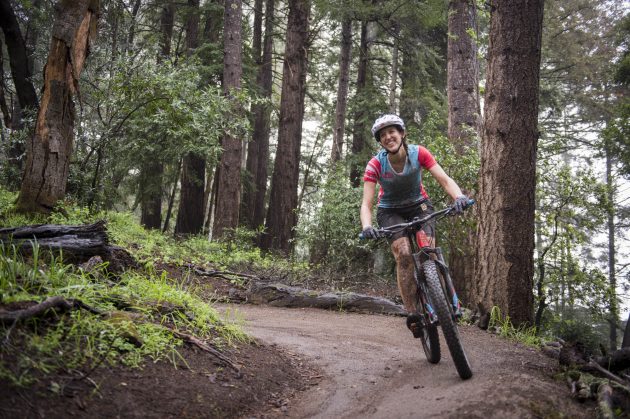 With the support of Bell, eight women from Nashville, Tennessee, to Edmonton, Alberta, will build a community of female mountain bikers within their respective locations. Each ambassador is expected to offer a regular all-women’s mountain bike ride every month for one year. Bell wants to expand this program in the future, but it wanted to “start small.”

Inevitably, challenges will present themselves for each of these women and limiting the group size allows the company to be connected, involved and supportive throughout the ambassador process, seeing that each of these women succeed in their programs.

Bell received over 200 applications for the Joy Ride Ambassador Program, many hailing from epic ride destinations, but opted to move forward with some less-traveled locations. “We really wanted to find spots where there was opportunity,” said Klodnicki.

While Bell had several bike companies offer to sponsor the Joy Ride program, it declined, wanting to be flexible and keep doors open to all of the bike industry. Essentially, Bell chose not to team up with anyone so it could team up with everyone. Each of the Joy Ride Ambassadors is encouraged to do the same in her own community.

Ibis, Blackburn, Camelbak, Giro and Luna Bar all provided generous support for the kickoff weekend. While Bell certainly wants strong brand recognition at each Joy Ride event—the ambassadors have all received Joy Ride helmets, apparel and pop-up tents—the ladies were encouraged to seek support from everyone they know, including friends involved in other ambassador programs. It’s important to Bell that the Joy Ride program is all-encompassing.

The name “Joy Ride” and the associated apparel is the result of surveying 750 women about why they ride, their style preferences, wants and needs. Bell heard the word “joy” repeatedly throughout the process. You’ll notice that while the apparel has a feminine quality, it tastefully stands out from much of what you see for women. With the Joy Ride gear, Bell was striving for “purpose built while being aesthetically beautiful.”

The Joy Ride program is focused on the four following pillars:

1. Obsessed with dirt
2. Welcoming and inclusive
3. Fun! (and sometimes educational)
4. Organized, but flexible

Klodnicki emphasized the importance of the ambassadors dividing the women into self-identified ride levels. The ability to challenge yourself is present when you ride with others at a similar or slightly more advanced level than oneself. It’s the “if she can ride it, I can ride it” philosophy. I’ve personally found this beneficial to my own growth as a mountain biker.

Ultimately, these eight women must tailor their programs to fit into their respective communities. Terrain, weather, personalities, riding level and personal preferences will all be factors of how these programs evolve.

From frigid cold to unbearable heat to moisture, the fourth pillar: “organized, but flexible,” may be the biggest challenge for some of the ambassadors. For instance, after three weeks of 70 degrees and sunshine, Bell hadn’t expected a weekend of heavy rain and high wind. We spent the first day in Santa Cruz having a blast on the new Ibis Mojo 3 in a steady drizzle, but riding on day two was out of the question.

A 20-year age gap spans the youngest and eldest ambassador. Through their diverse careers and backgrounds, they represent a small cross-section of the U.S. and Canada. While they have some connections, most of these women do not have a background in the bike industry. Perhaps this makes them a better fit for the ambassador role. A few of the ambassadors have already held their first Joy Ride and they were stoked to share their successes. 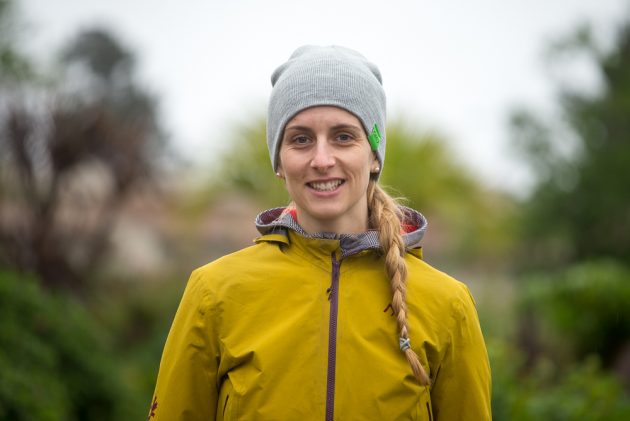 Isabelle Jacques, North Vancouver, BC: Isabelle raced mountain bikes as a kid, but was always training with boys. It wasn’t until a few years ago that she started riding with women and that’s when she saw her riding skills really progress. She’s a certified Professional Mountain Bike Instructor and enjoys sharing riding strengths with friends, i.e. swapping downhill techniques for cross country skills. “I find that this program is almost something I’ve been waiting for … let’s just get out there and have a good time.” Samantha Jones, Kansas City, MO: When returning to her hometown of Kansas City, Sam was the only woman at the Lawrence MTB Club weekly rides. She started a Thursday night women’s ride, and the ride grew to 16 people before winter. 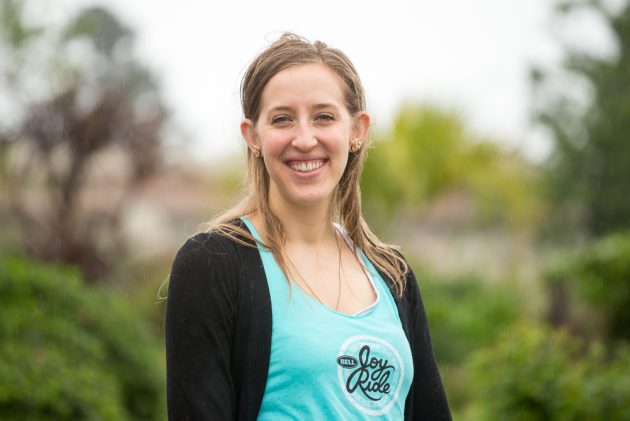 Nina Karpoff, Edmonton, AB: As a resident of Edmonton, Alberta, Nina’s mountain bike rides are currently challenged by cold temperatures and unfavorable trail conditions, but she left the Joy Ride weekend feeling prepared. In addition to being a skilled rider, she’s also a talented photographer. Be sure to follow her on Instagram.

Amber Krueger, Madison, WI: Amber lives 15 minutes from singletrack, but she expressed that Madison needed the Joy Ride program to encourage women to explore the area’s trails. She completed her inaugural Joy Ride event in February with a seasonally appropriate fat bike ride. Seventy women gathered at the Quarry Ridge trailhead for coffee and doughnuts before hitting the trails on Surly demo bikes. The trail offered a short loop for all riding abilities. As a representative of the midwest, Amber is one of the ambassadors that will be challenged by cold and wet trail conditions. As a Wisconsin native, I can appreciate the brisk, negative-8 degree event but Amber thoughtfully combatted the cold with a heated tent and a bonfire.

Karina Magrath, Coeur d’ Alene, ID: Karina is Professional Mountain Bike Instructor certified. She was accustomed to large women’s riding groups when she lived in Seattle, but the percentage of women on her Coeur d’Alene, Idaho, group rides was small. She’s looking forward to her August Joy Ride camping event at Farragut State Park, in Athel, Idaho. Women will ride from the campground to trails that offer opportunities for beginner, intermediate and advanced riders. She’s already received 100 RSVPs.

Veronique Pardee, Tucson, AZ: It’s been over a year since Veronique and a fellow cyclist started the program In Session. The group was inspired by the Trek Dirt Series and developed from the realization that she hadn’t spent much time “sessioning” trail sections and features. She had up to 13 women at the rides and as they neared its anniversary, she wondered how it would grow. At Veronique’s first Joy Ride event, she gathered 55 women. She was really focused on the social aspect of this ride, so she shuttled people out and back from a local brewery where they were offered $1 post-ride beers. 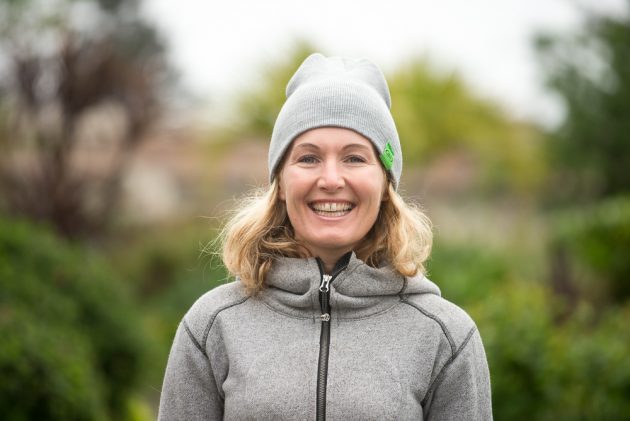 Missy Petty, Knoxville, TN: Missy is a sponsored racer. Her home city of Knoxville won the Bell Built grant in 2015, and the Appalachian Mountain Bike Club is using the funds to build a gravity trail at Urban Wilderness. The location already has up to 40 miles of trail and this challenging terrain will offer Missy’s Joy Ride group trail access for all skill levels only a few minutes from the city. 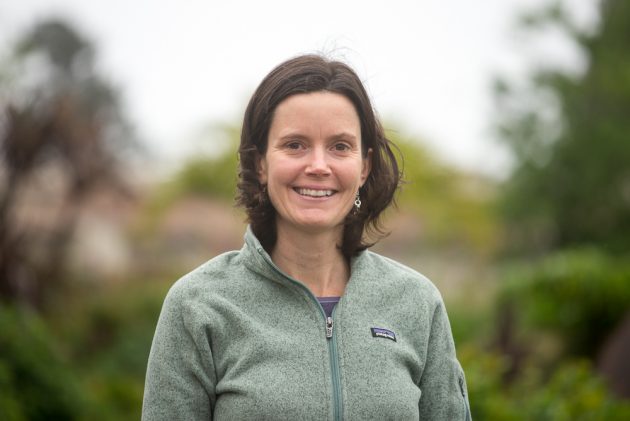 Kendall Ryan, Richmond, VA: Kendall learned to ride from Luna Chicks, an all-women’s team, and she’s convinced that’s why she’s had such a positive riding experience. Richmond was the recipient of a Bell Built grant in 2014 for the Richmond Regional Ride Center, and they’re continuing to expand on this trail network of beginner and intermediate friendly trails. To get a little perspective on how the Joy Ride program would affect mountain bike advocacy at large, I spoke with Laurel Harkness, IMBA Region Director for Northern California. Laurel has been riding since 1987, but it was three years before she rode with another woman. For her, it’s inspiring to see a program like this and it’s a great gathering place for stories that she can retell at a later date. She also sees tremendous value in terms of hierarchy of engagement. It’s where beginners start.

“I see this demographic as being very important and untapped,” said Harkness. As a veteran mountain biker and a single mom of two kids who also ride, she represents a less-publicized demographic at land manager meetings and seeks to help change preconceived notions of who a mountain biker is. Her son rides to find the next best fishing spot and her daughter goes out seeking a great photo spot. Currently, IMBA memberships are 80-percent male and 20-percent female. Harkness would love to see that level out. A program like Joy Ride is the springboard.

Congratulations to this amazing group of women that will inspire, promote and grow women’s rides in their communities. These eight women are planting the seed for a future of ambassadors across the nation and, hopefully, across the world. Follow all these ladies on Instagram, check out their ride pages on Facebook, and be sure to attend a Joy Ride if you’re in their area.

Become an advocate for all women’s rides by helping Bell build a map. Drop a pin so you can connect with women across the U.S. and Canada; host a ride, find a leader, build a community.