Tegan Phillips is a comic artist who first started drawing for a contest to win a touring bike and gear. Guess what – she won that bike and set off riding it around the world. Today, she is an avid cyclist, artist, motivational speaker and all-around interesting and adventurous person. We caught up with Tegan to hear the background behind how she got to where she is today, and where she plans on going from here.

So what’s the story behind why you started drawing comics? To win a touring bike and gear? This sounds like an interesting story! Also, did you draw much at all before that?

My first ever comic was a few scribbles on a very old iPad that I drew as an attempt to win an old touring bike and gear. Entrants had to describe what amazing things they would do with the bike if they won and I didn’t have anything too exciting to describe, so I thought perhaps if I made my entry a bit different then nobody would notice that I only had a very mediocre plan. By a stroke of luck my tactic paid off and I got the bike, which I took on a trip through Spain. I recorded the trip in a comic blog and that started off the next few years of full time cartooning. I definitely hadn’t drawn much before that and still consider myself a total amateur as far as actual artistic ability is concerned. My characters don’t even have fingers.

Where was your first bike tour?

That trip mentioned above was my first ever tour, riding from Bristol down to southern Spain (with a sneaky ferry trip in the middle). The adventure can probably be summed up just in the contents of the first day: rain, an accidental u-turn taking me 50km back to where I started, more rain, angry drivers shouting, losing phone to contact the place I was staying for the night, dropping my bike on my leg, sitting bleeding in the rain for two more hours, and finally ending up in the emergency room. Every day was some variation of that kind of thing, with some additional excitement halfway as I met a Spanish boy who joined the adventure, adding an extra dimension to the already chaotic journey.

What was your favorite/least favorite part about that trip? What surprised you the most?

My favorite part: eating ice cream every day! And also just the experience of total freedom–with a bike and a tent and no major deadlines, I could go in any direction for as long as I wanted.

Most surprising part: how easy bicycle touring actually is! I went in thinking it was going to be this complicated science that somebody with no geography skills or coordination like me would probably never be able to get right. It was such fun learning that it actually is as simple as it sounds: ride bike, eat, put up tent, sleep, repeat. Anybody could do it, even me. 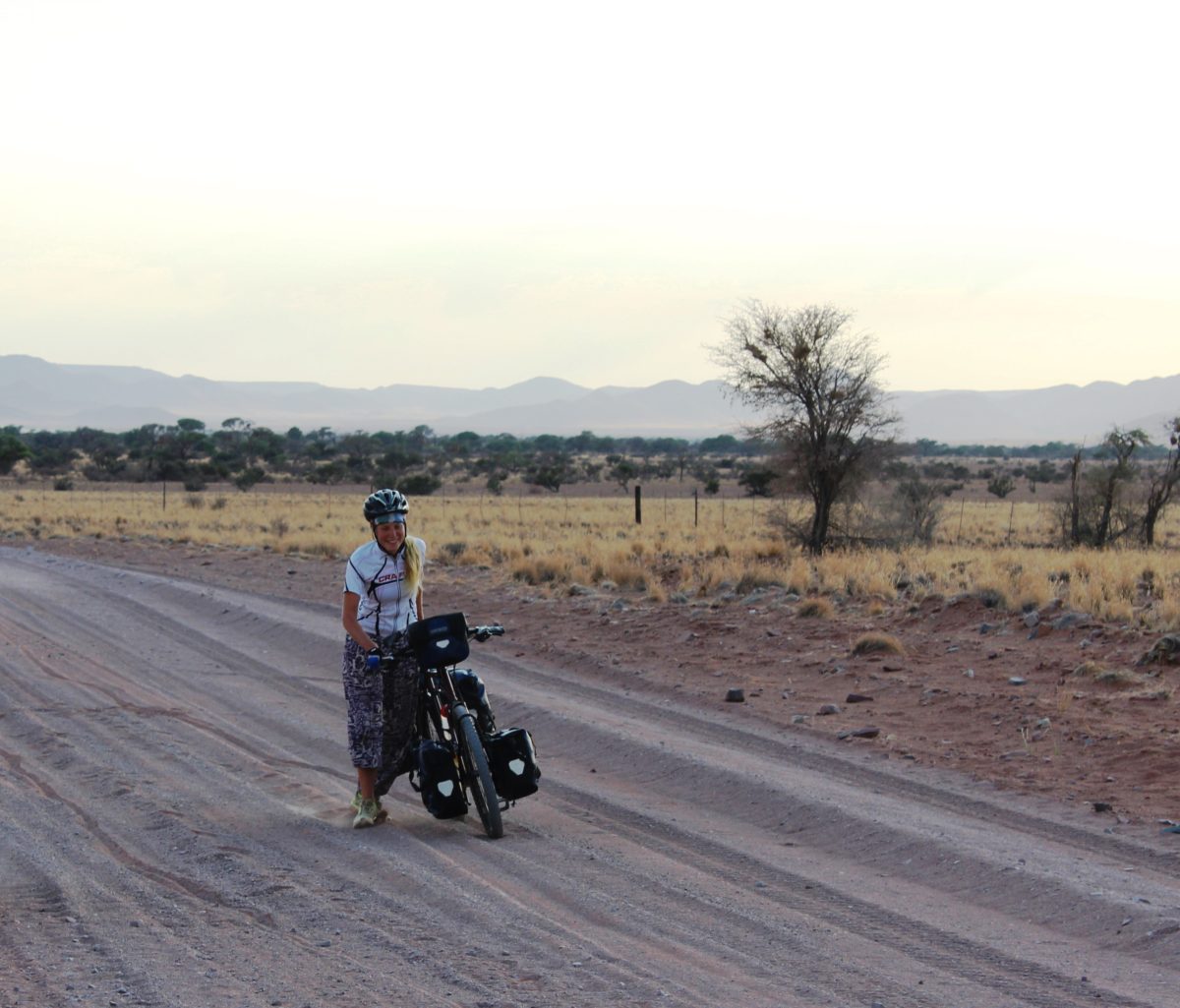 What is your favorite part about riding bikes or touring by bike?

It’s not just normal traveling, where you’re zipping from city to city, mostly shopping and sightseeing; it’s the kind of traveling when you hardly spend any time in cities at all. Most days of most weeks you’re between cities, in the countryside, with local people. You get to really know a place through its landscape, it’s traditions, the hospitality of its people. And then, of course, the touring lifestyle–spending all day outdoors, fresh air and exercise, great meals, lots of much-needed sleep. It makes you feel so healthy. I never really want to go back to the world of screens and malls after a bicycle tour. 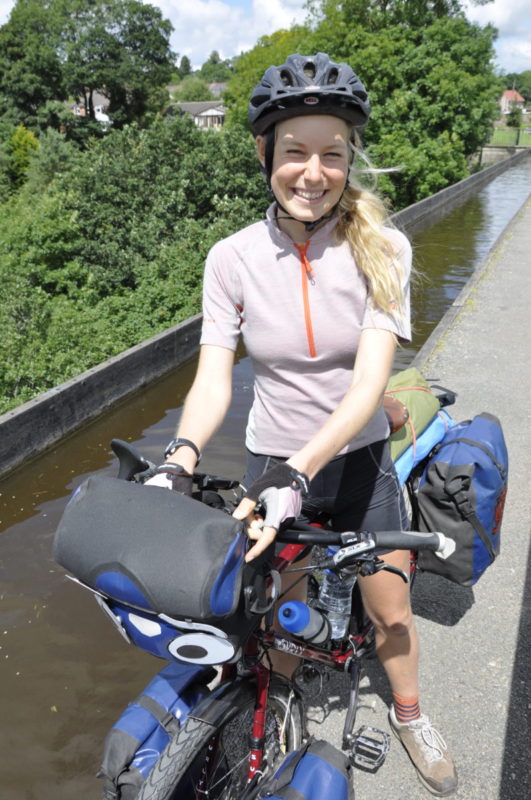 What is your goal with Unclipped Adventure? What inspired you to do it and what do you hope to inspire others to do?

Giving talks kind of came about by accident after my family took a year to cycle through Africa (the year after my Spain trip). When we came back I was the family member who hated public speaking the least and so was assigned the role of giving presentations to our friends and family. Using a combination of my comics and photographs, I would run through some of the things we saw and did and noticed or “unlearnt” about the world, and it felt really good to be able to share some of those insights and experiences with other people. Adventuring is such a privilege, it gets you to see the world differently, to realize the possibilities for creating your own freedom and happiness – it’s natural to want to be part of getting others to feel that for themselves too.

Endurance adventuring in general also teaches you a lot of harder lessons. In 2016 I did a self-designed 1400 mile triathlon in New Zealand and it taught me a lot about developing mental strength to push through difficulties. That mental strength has helped me so much in everyday life; that practice of feeling fear, exhaustion, resistance and keeping on pushing forward anyway. I’ve had a lot of fun illustrating that concept for talks, with fear being this purple little potato-like character. Perhaps a bit silly but it’s something fun anyway.

Do you have a favorite comic or series that you’ve done?

I did two comics about “The Ministry of Adventure,” which I was hoping to one day make into a book but until this moment had completely forgotten about. It’s based on the idea that there’s this mythical place called The Ministry of Adventure, and it’s run by things called Adventure Potatoes, and every time you go on an adventure the potato assigned to you has to decide what to throw your way. They can use bad weather, broken gear, natural disasters, injuries – and you can trade with them. For example, you can ask for a full day of tailwinds in exchange for a full night of mosquitoes in your tent. The idea came about after I jokingly told my family I’d trade a possible elephant attack for a definite Malaria infection, and promptly got Malaria. Those Adventure Potatoes are such cheeky bastards. 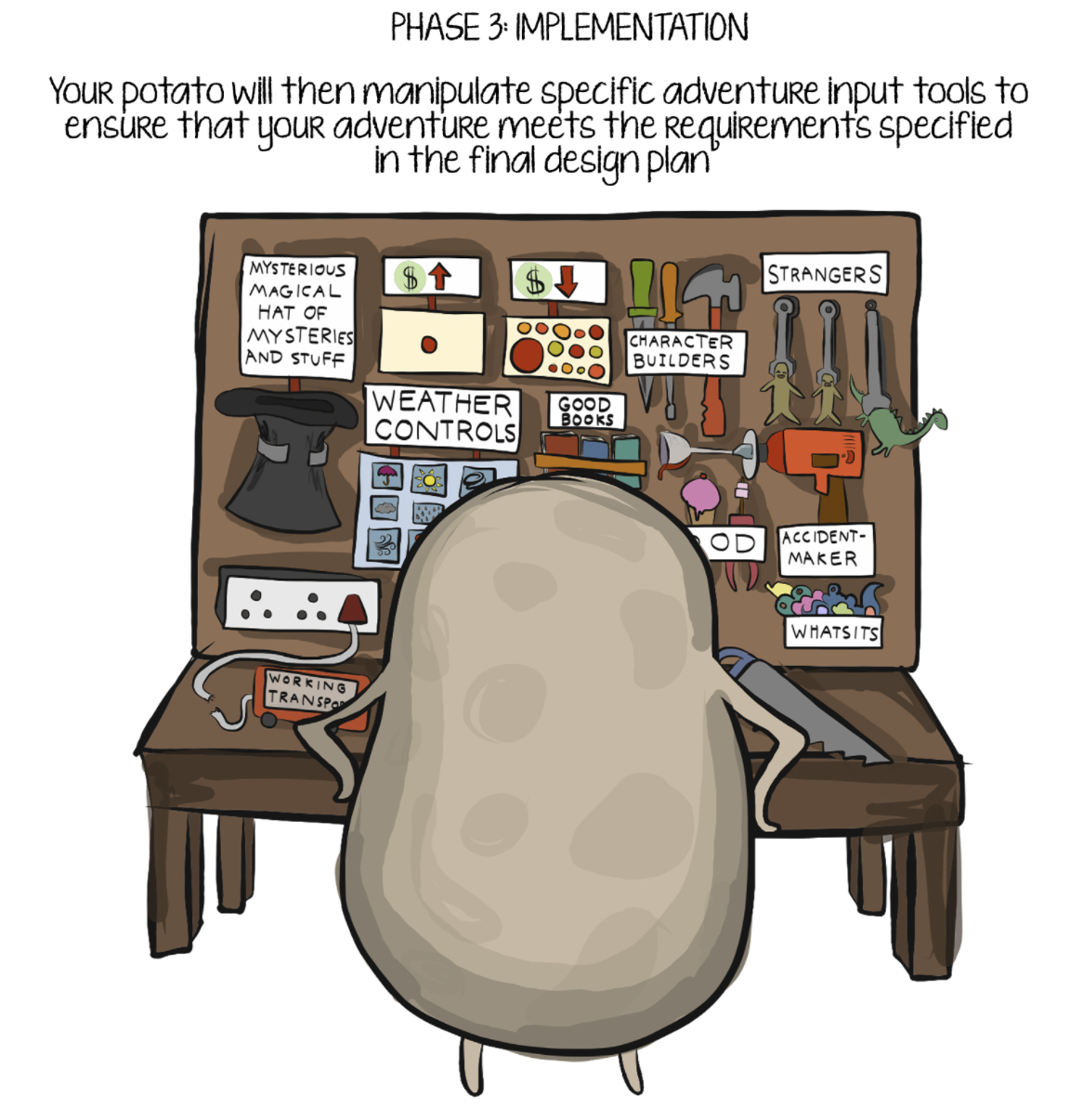 What do you do when you’re not riding your bike, drawing or doing something else related to Unclipped Adventure?

At 25 I’ve just hit my quarter-life crisis, so I spend a lot of time wondering what on earth I’m doing with my life. I’m told that’s normal. When not riding or drawing (which is most of the time), I also work a few part-time jobs and take philosophy classes and I hang out with my gran a few days a week. In short: nothing too exciting. 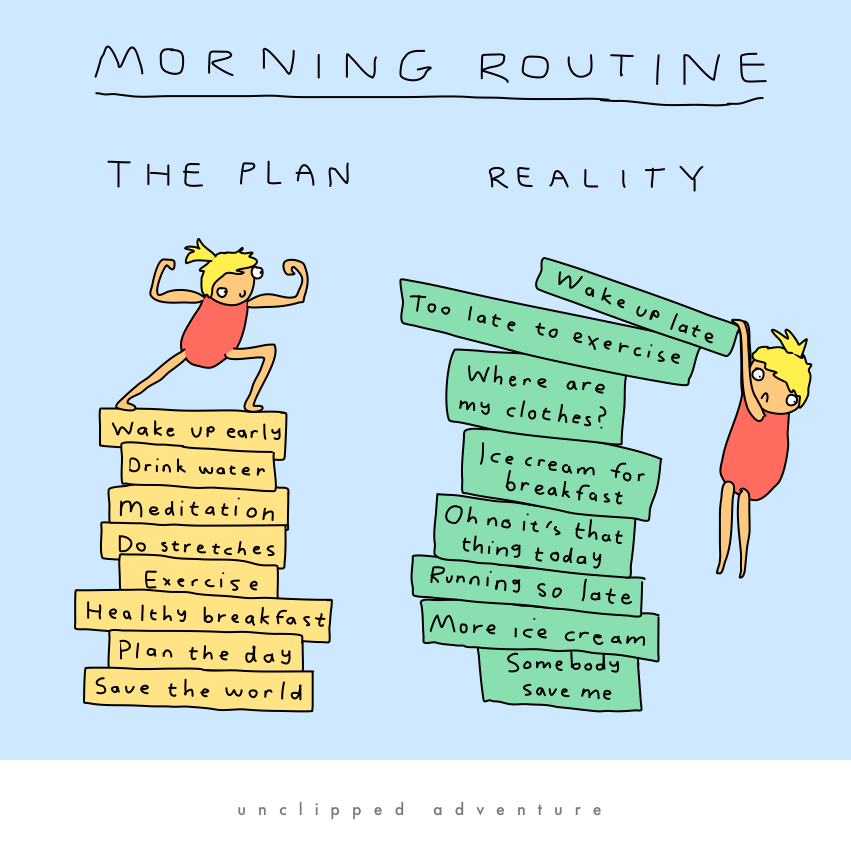 Do you have any big adventures planned for the near future? Or not so near future? What is a dream trip/adventure/thing you’d like to do?

Every time I answer this question I say something different! I’m also hoping to get into bikepacking this year, which in my mind is a faster, lighter version of touring. Despite my love of the great unexplored wild, I’ll take tar and slicks and speed over dirt any day. I’m also keen on the Americas and Asia as cycling destinations, I’ve started merchandising and selling some cartoons with the aim of becoming location independent in a year or so – itchy feet doesn’t even begin where I’m at right now! And lastly, big dream of mine has always been to do Cairo to Cape Town as some kind of female cycling record-setting expedition… one day. 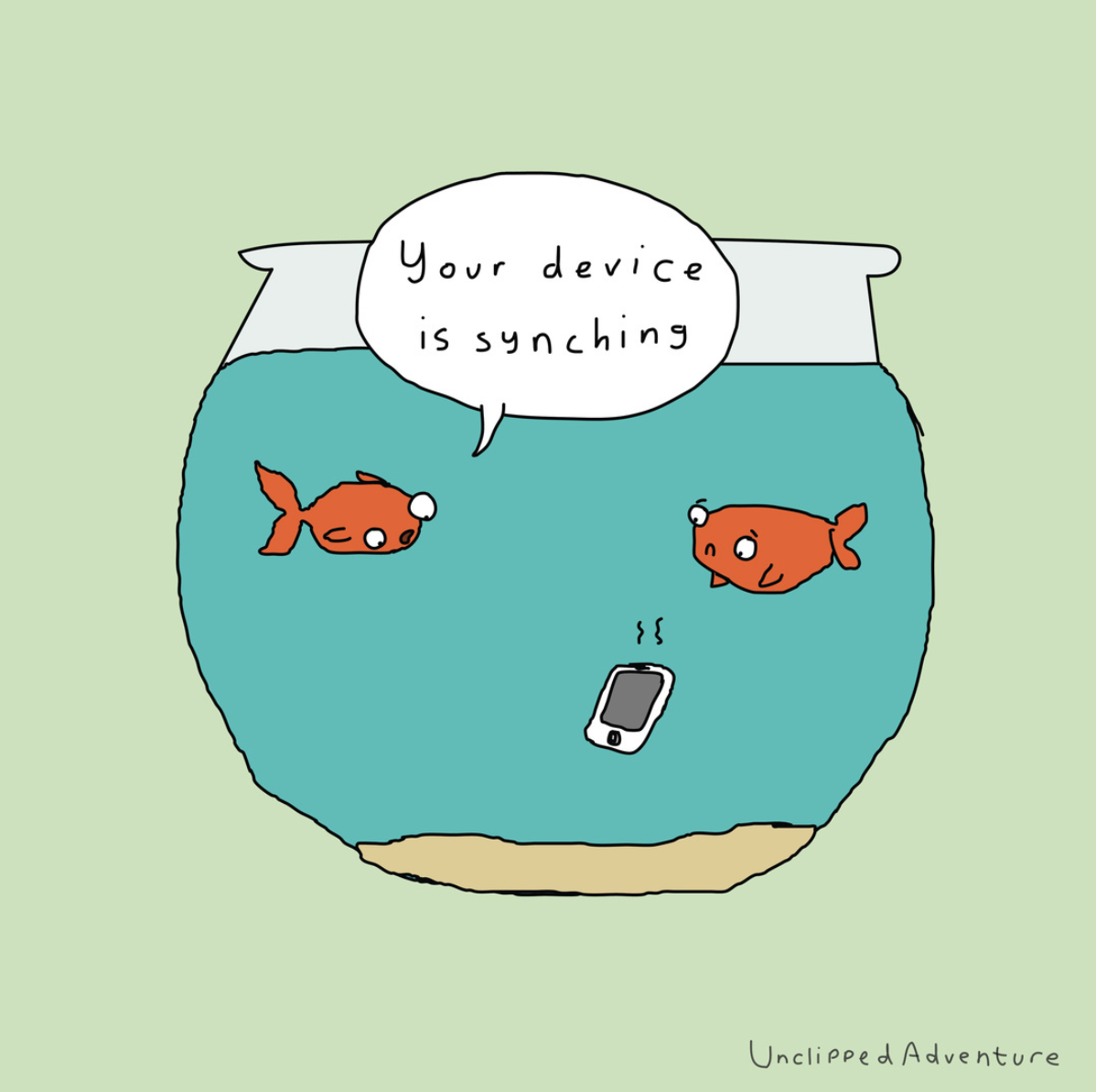 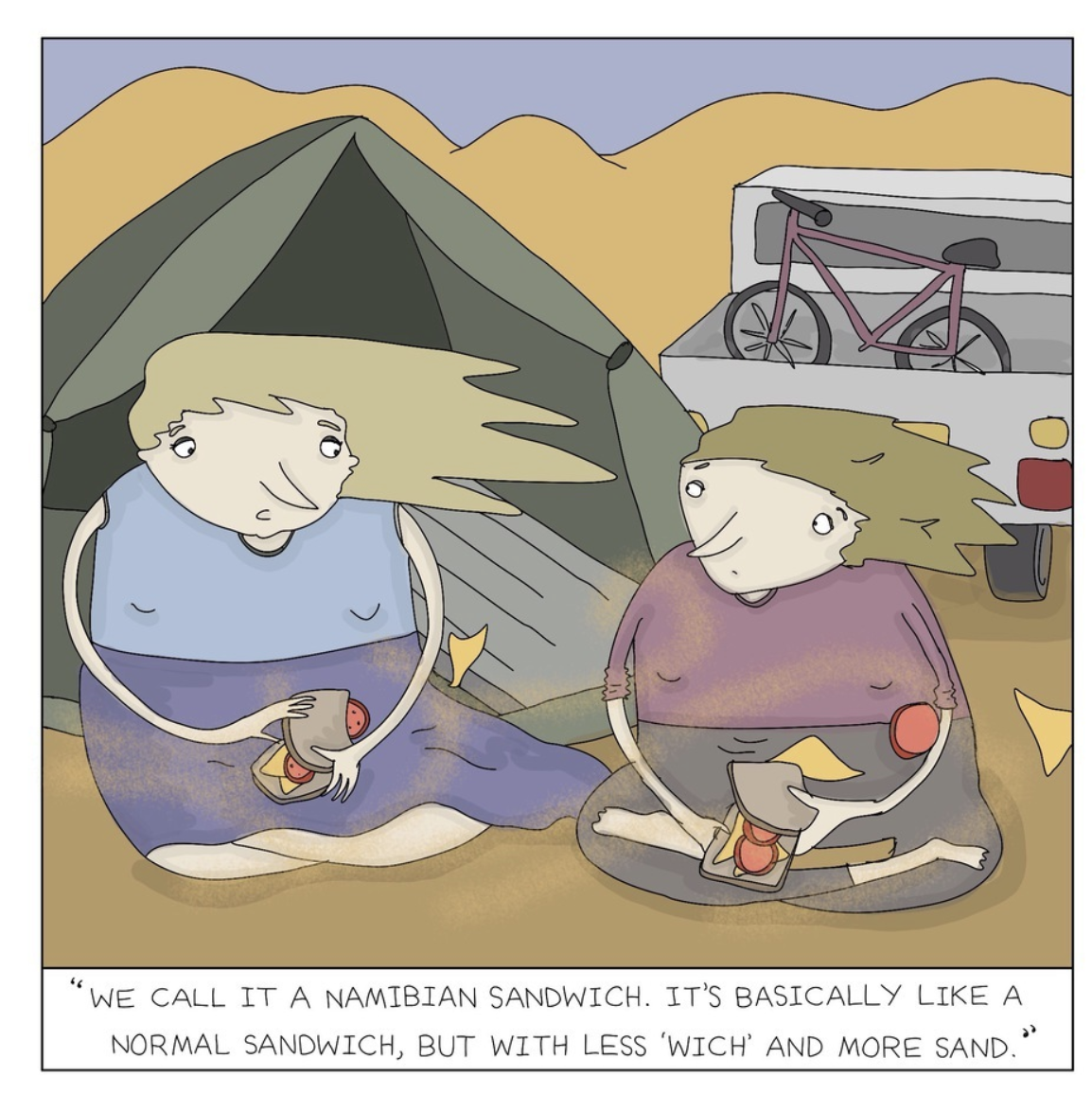 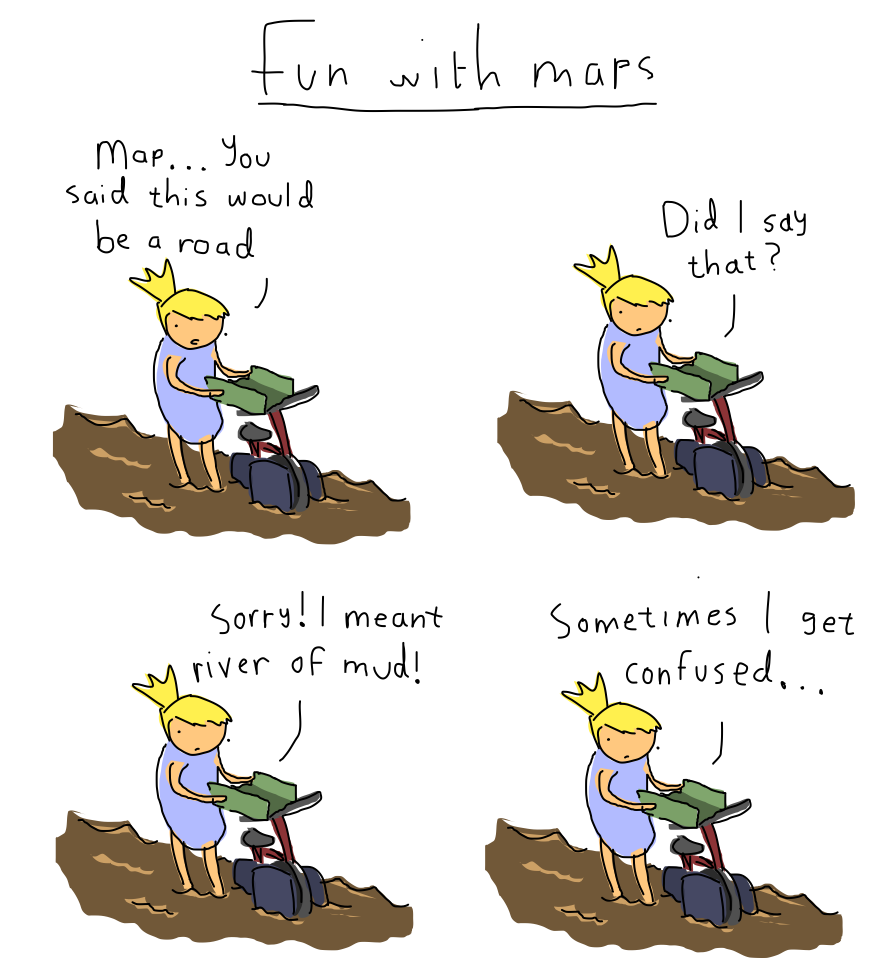