I had been in the town of Quincy, California, for no longer than an hour before I was perched atop Mount Hough, beer in hand, peering down at the deep-blue waters of Crystal Lake alongside Mason Werner and Garen Becker. Werner, a resident, and Becker, a native of Santa Cruz, were here to guide me through my first taste of the mountains of northeastern California. The area is known as the Lost Sierra, a land rife with mystery, folklore, legend, swimming holes and, now, choice singletrack. It was early evening, and the California summer illuminated the mountains on the horizon. We could see where the Sierra Nevada ended and the Cascades began as Mount Lassen punctuated the skyline. We stood on the edge of the cliff, taking in the beauty of the mountains and lake before plunging down the trails of Mount Hough. 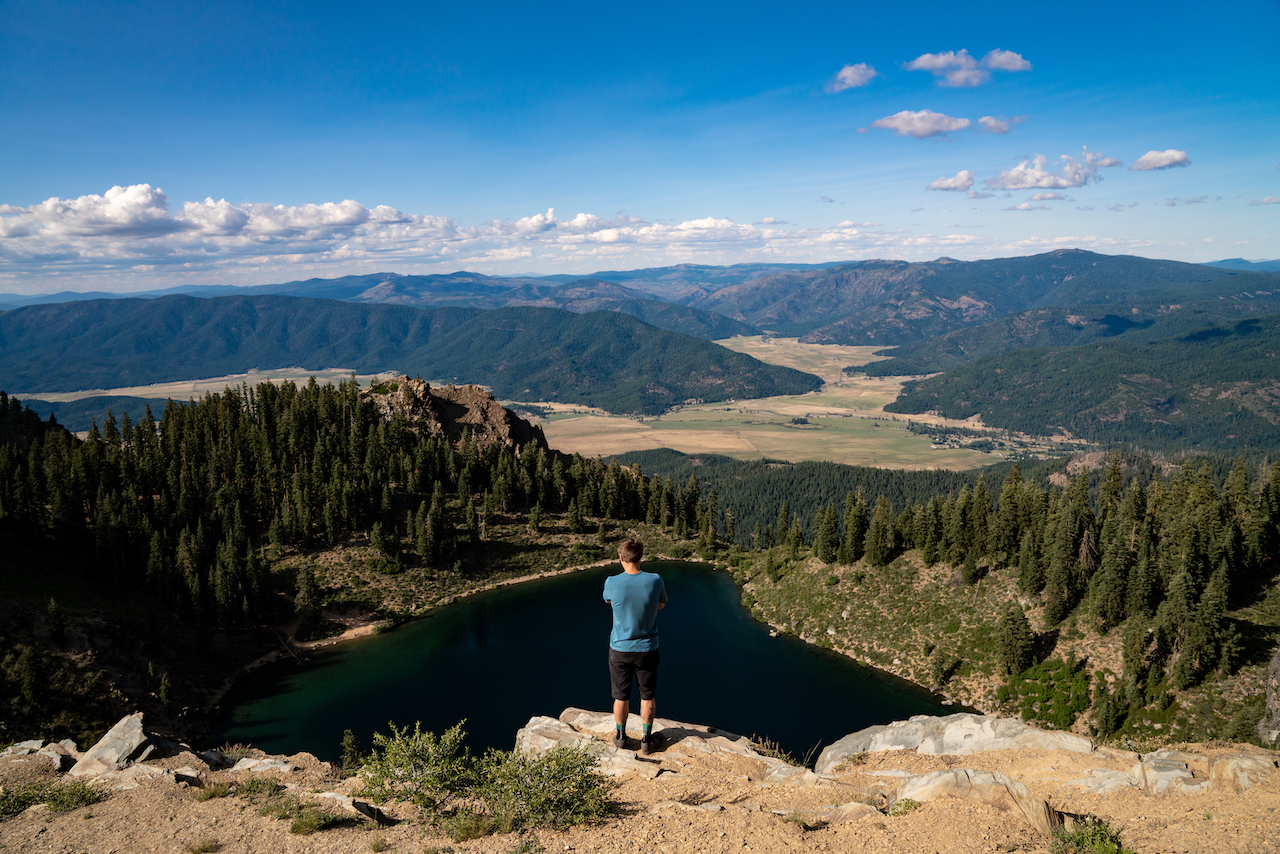 Quincy is located about 90 minutes west of Reno, Nevada. The town has remained quiet and virtually impervious to the strong grip of corporate America. The businesses on Main Street are independently owned and occupied by the local community. Established during the gold rush of the mid-1800s, Quincy has been a logging town for the better part of a century. Nestled in Plumas National Forest, it is surrounded by a million acres of beautiful forestland. 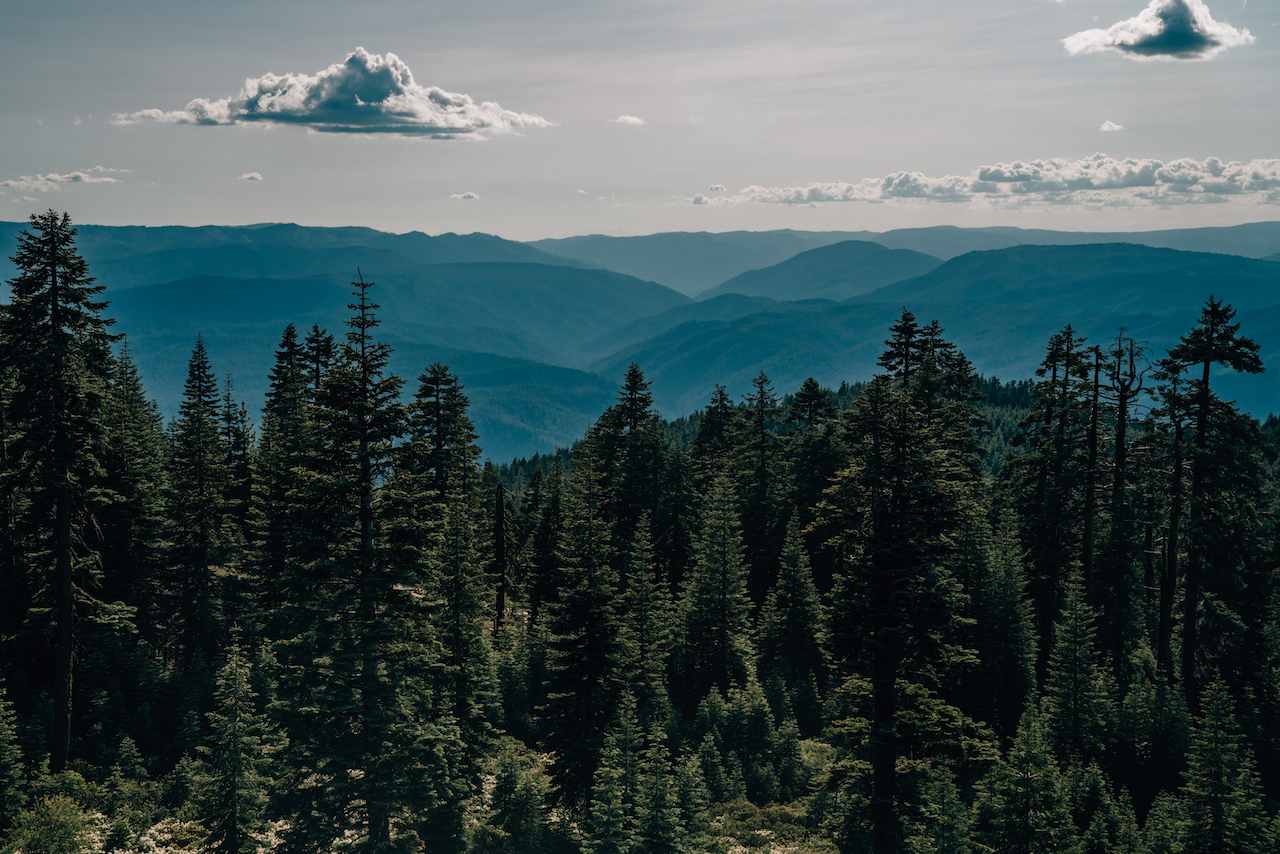 On the edge of town, an airstrip has a few small planes scattered at the end of the runway. Next to the airfield, basking in the late-afternoon sun, is the latest and second location for Yuba Expeditions and the first official home office of Sierra Buttes Trail Stewardship. Those familiar with the Stewardship will likely associate the nonprofit with the town of Downieville, California. It was there, in 2003, that the small trail group began under the guidance of Greg Williams and friends. Downieville remains an essential piece to the Stewardship puzzle, as it hosts the annual Downieville Classic race as well as plays home to the area’s more legendary trails. There is, however, a breath of renewed energy in Quincy — a new generation that hopes to carry on what the Stewardship started back in Downieville. 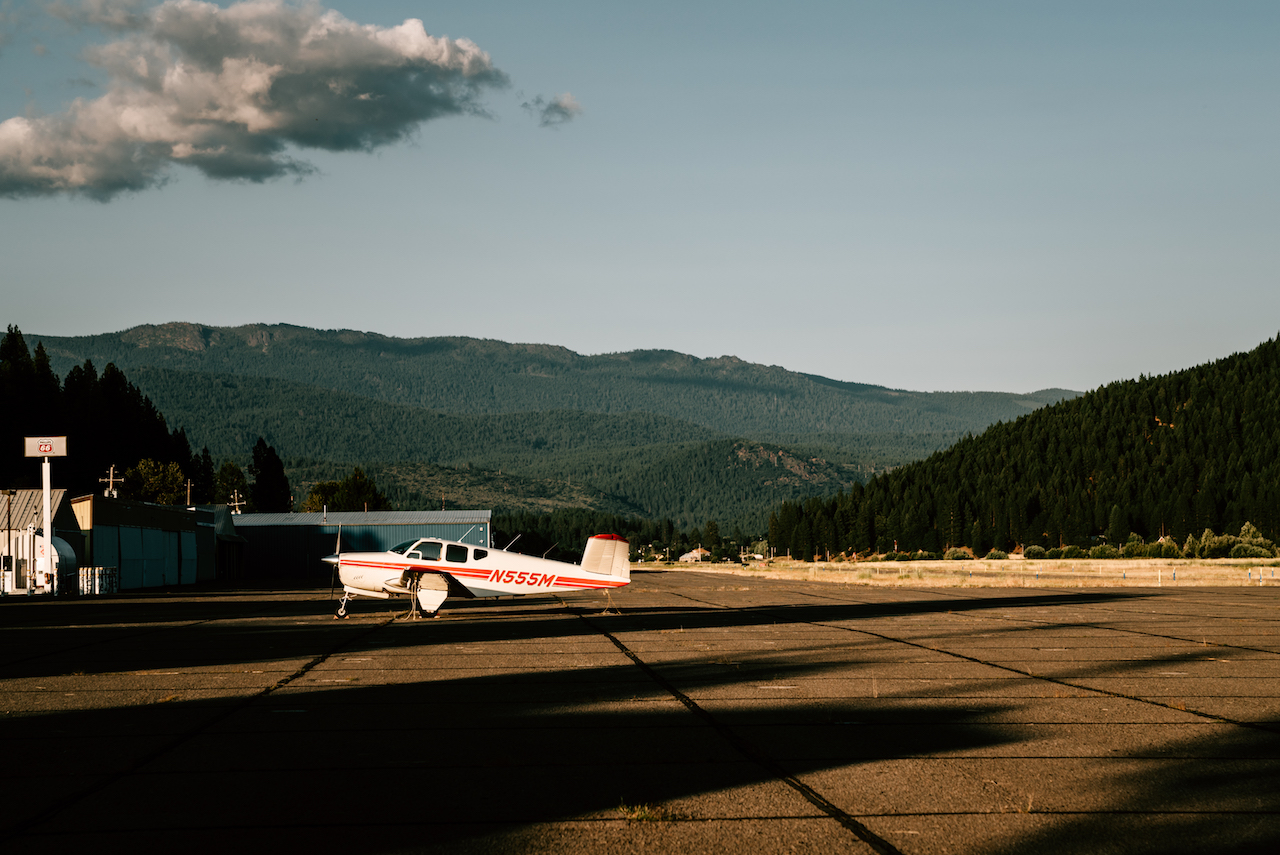 It was fitting that my time in Quincy began on Mount Hough: The trail descending back into town has, in a way, put Quincy on the map. Mount Hough is the final descent of the now-annual Grinduro event hosted by the Stewardship, which has attracted riders from all over to the area. While Mount Hough’s fast and furious downhill segment is nothing short of incredible, it is but a morsel of what the Lost Sierra has to offer. 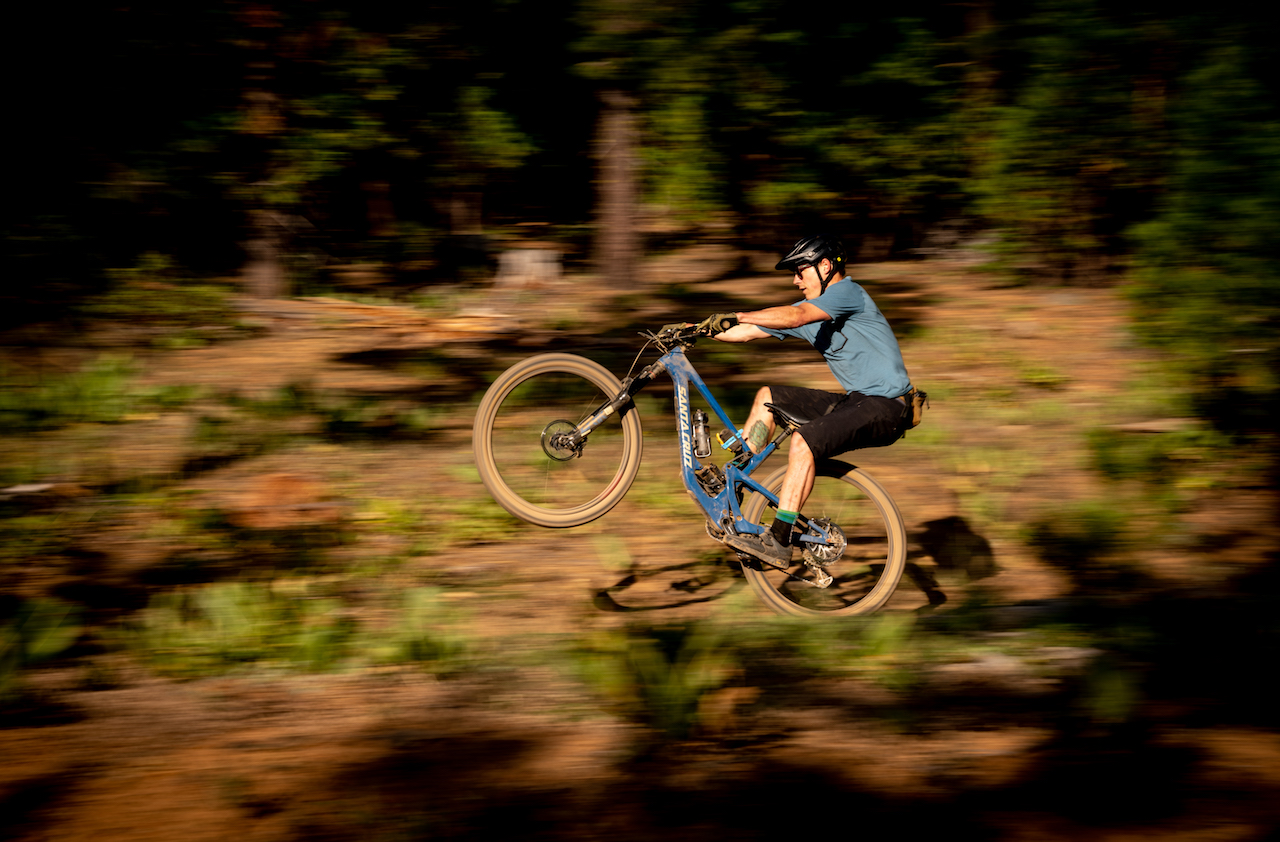 The next day, we followed local frame-builder Cameron Falconer and his friend Matt Meyerl off onto the Indian Falls Reserve Trail. Our launching point was once again the summit of Mount Hough; the trails of Indian Falls meandered up and down along ridgelines before dipping back into the forest and linking back to some of the mountain’s older trails. It was here that we got to witness just one of the many things that the Stewardship is doing for the trail users of the Lost Sierra. As we traversed a fire road and entered the next section of singletrack on Indian Falls Reserve, we encountered a full-scale workday. 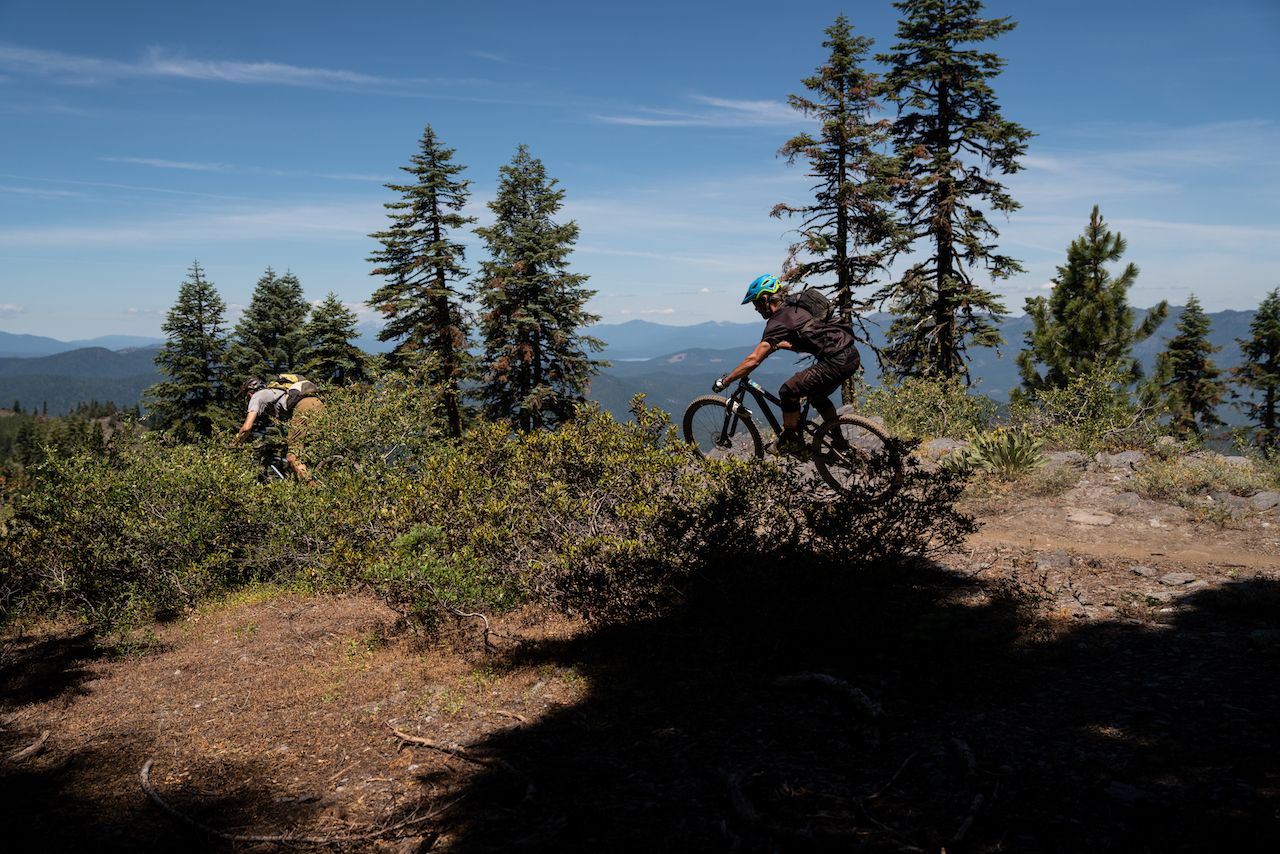 Under the direction of Mandy Beatty, a large group of school-age mountain bikers was hard at work during the third week of summer camp. Beatty, along with the campers, was dusty and sweaty from a long day of working on the trail, but it did little to curb her energy as she explained what the group had been up to that day. Beatty fell in love with the area after visiting and volunteering in 2011. She moved away briefly to Colorado, only to return and take a full-time position with the Stewardship as the trails program coordinator. After a morning armoring portions of the trail with large rocks to curb erosion, the kids enjoyed lunch before packing out to squeeze a ride in before the day was over. 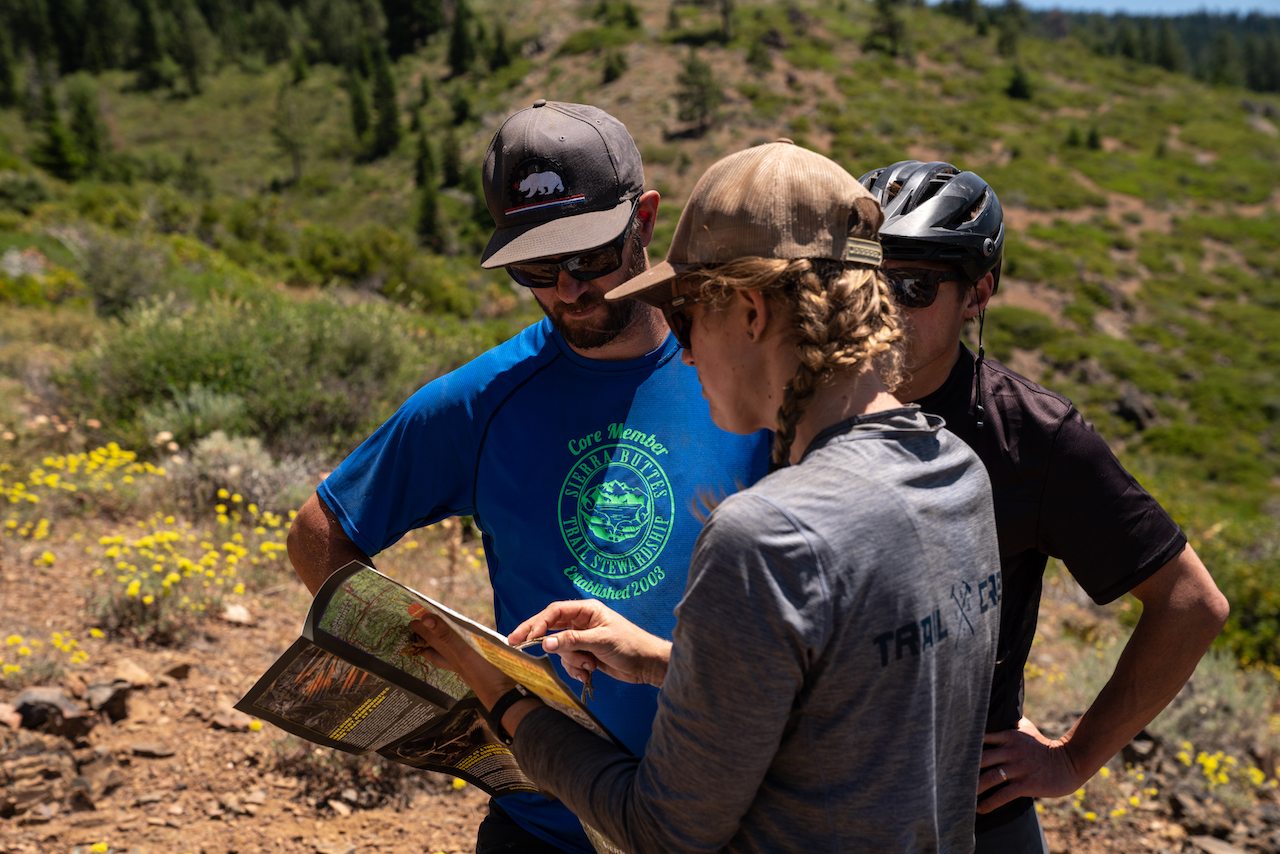 On the following morning, we headed to the neighboring town of Graeagle to get the word on the area’s trails straight from the source. Outside the Graeagle Restaurant, Greg Williams stood alongside a longtime friend and co-conspirator at the Stewardship, a man who introduced himself merely as Cosby. Williams, with a long and bushy black beard and laid-back demeanor, greeted us as if we’d been friends for years. Over some monster omelets and a few gallons of diner coffee, Williams explained a bit of the Stewardship’s history and what their goals are for the Lost Sierra area. 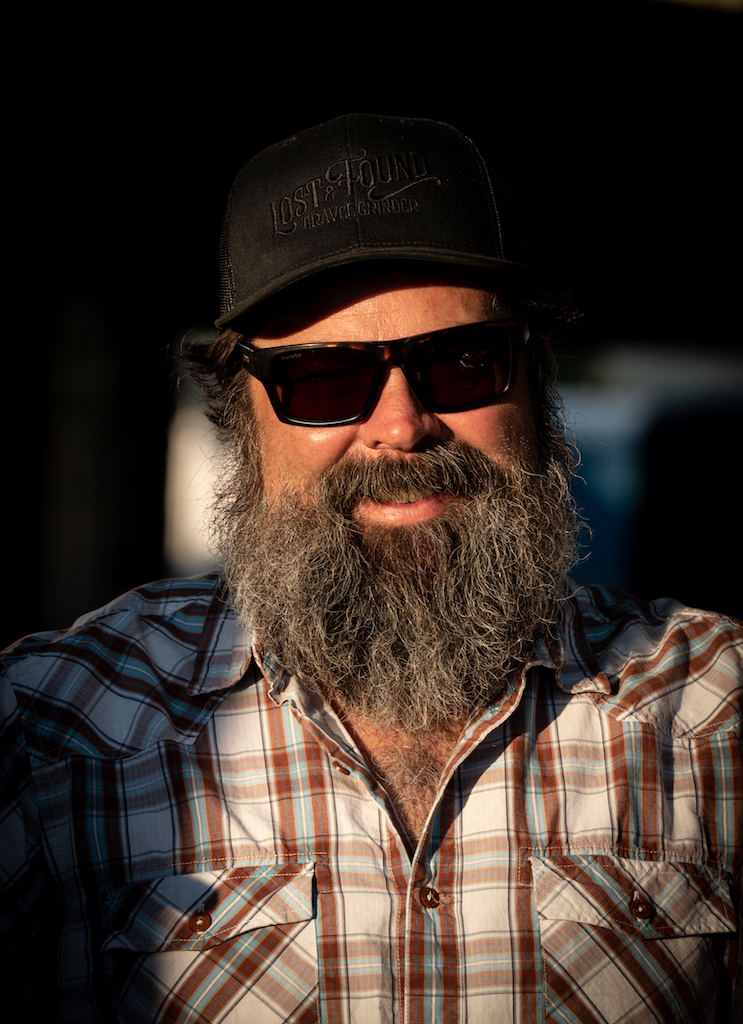 Since 2003, the Sierra Buttes Trail Stewardship has looked to improve and create trail networks in the area. Williams explained that it was about more than just mountain bikes and recreation; it was about joining communities together. Talking to people who know Williams, the word “visionary” was mentioned several times in reference to what he has been able to accomplish in the area and what is being planned for the future.

After a hearty breakfast and heartier conversation, Williams took us out on a ride to the Lakes Basin Recreation Area. The Lakes Basin sits high above the town of Graeagle, offering riders rugged and rocky backcountry trails with stunning views of the area’s 20-some lakes under the shadow of Mount Elwell. The trails there were also an excellent display of just what the Stewardship does. Cosby, while at breakfast, recalled the process of removing a boulder the size of a large pickup truck that had been blocking the path of an existing trail. It was done by way of explosives and good old-fashioned elbow grease; he regaled us with descriptions of the amount of gravel that scattered across the mountain landscape. This is just a small example of the work that has gone into the land here. Williams glided with ease over the obstacles and rocky terrain we bounced and ratcheted, displaying a handling prowess earned after years of tackling difficult trail. Our traverse began to take us back down the mountain, where we encountered the Graeagle Lodge and one of the finest margaritas I’ve ever tasted. As we replenished electrolytes and eased the tension from gripping the bars on the rough terrain, I asked, “Why Quincy for home base?” The answer was simple: “That’s where the bulk of the staff lives,” Williams explained. 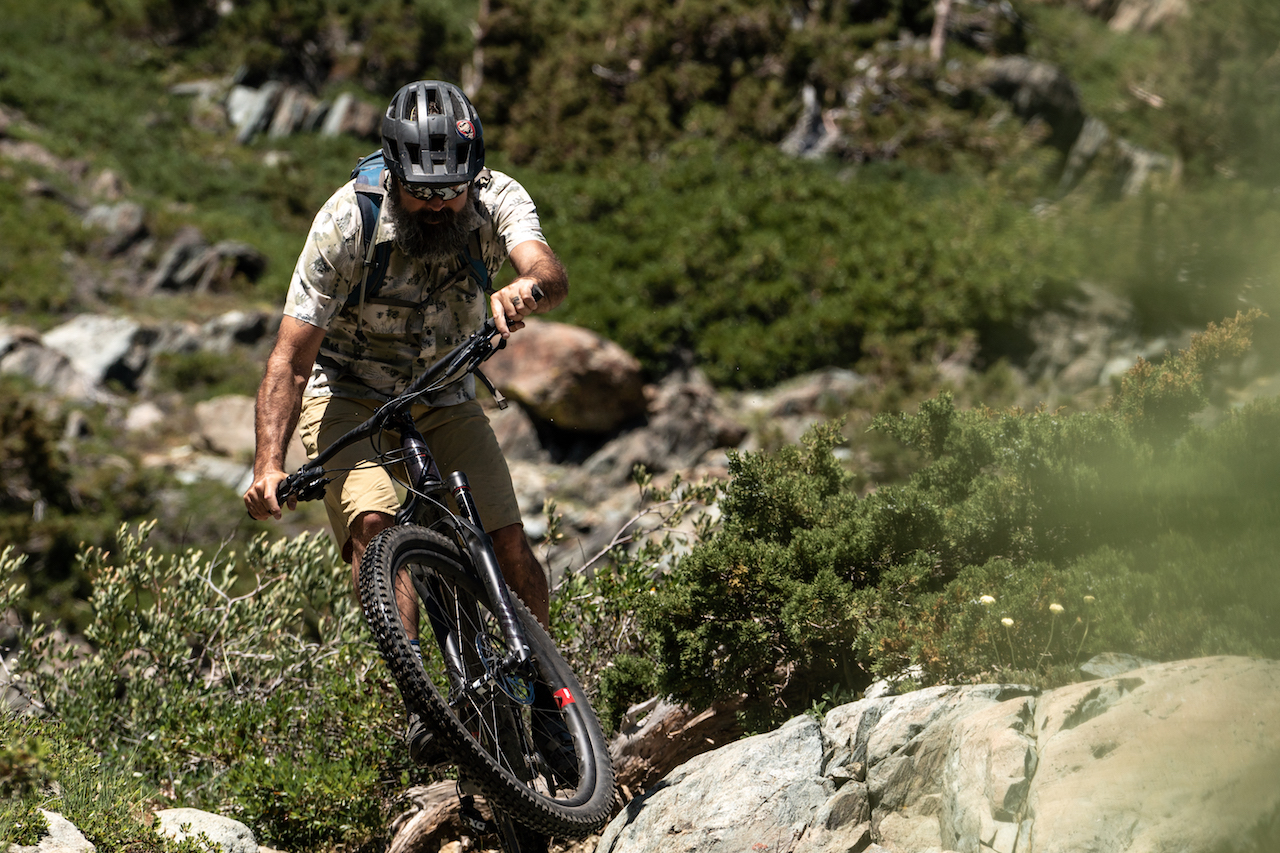 Quincy is also home to the office of the Forest Service, with whom the Stewardship works hand in hand when it comes time to propose work projects. A new route, for example, first must be surveyed and flagged before it’s approved. Amongst other requirements, new trails must not present any dangers to archeological or environmentally sensitive environments. The Stewardship has been working hard toward partnering with other local organizations to ensure that future projects address a multitude of needs. For instance, the Stewardship is currently working in tandem with the Nevada County Woods Riders on connection trails on Mount Hough to make sure all trail users’ desires are met whenever possible. 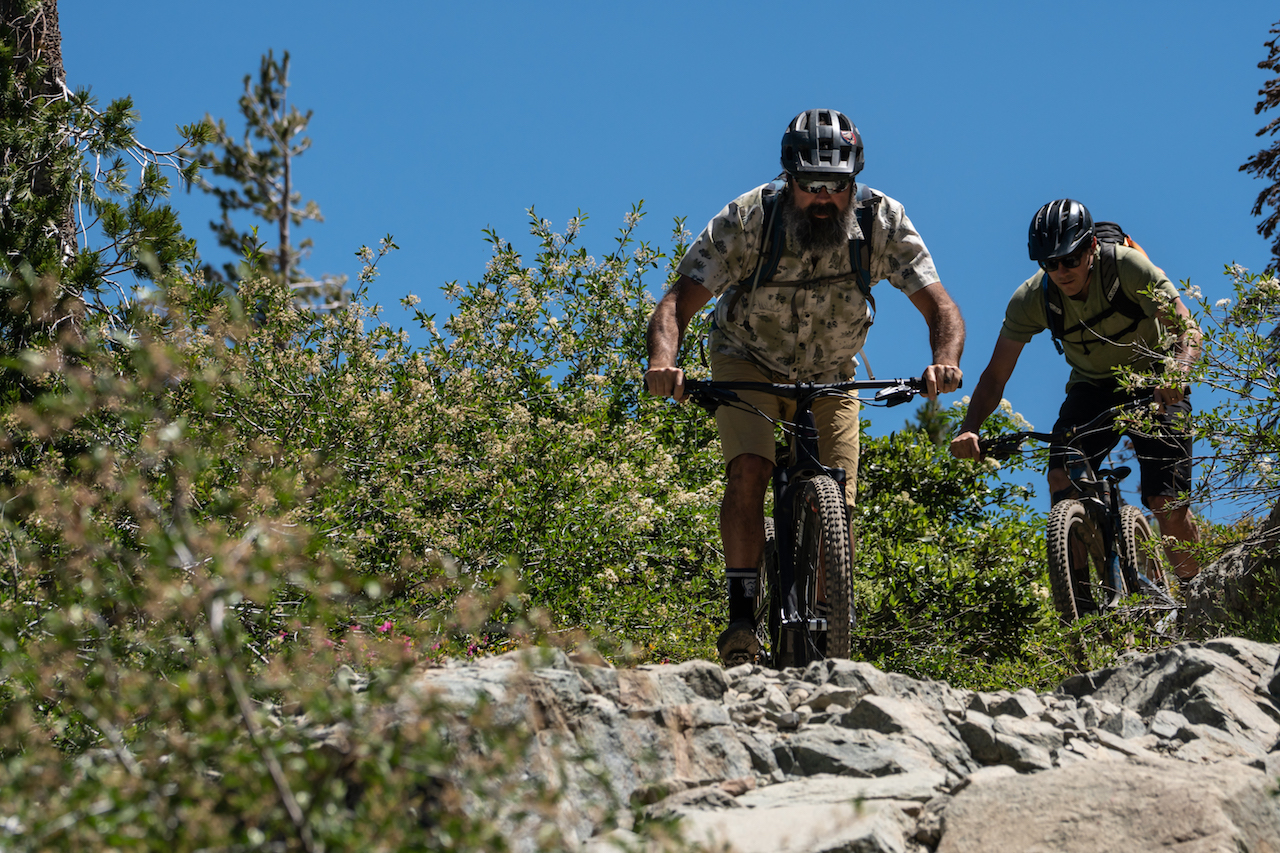 This latest project would extend Mount Hough’s trail network another 27 miles, removing a long section of forest road on the current Indian Falls Reserve loop. More singletrack means more fun, but it also means more money. The Sierra Buttes Trail Stewardship makes money in several ways. They throw events like the Downieville Classic and Grinduro, as well as other, smaller events throughout the summer. Good old-fashioned bake sales and raffles, like the $5-a-Foot campaign sponsored by Santa Cruz Bicycles, have been helping as well, but grants from larger organizations are what get the shovels moving. Beyond paying employees and maintaining equipment, funds also go toward paying government and environmental officials a healthy fee to show up and survey projects for approval. But even that doesn’t guarantee a green light. The Stewardship has put the “If you build it, they will come” hypothesis through thorough testing. Given the shuttles full of weekending out-of-towners pulling out of the Yuba Expeditions parking lot, the theory most certainly seems to be holding true. While tourism dollars help the local economy, Williams’ long-term vision for the area and the Stewardship’s role moving forward is to create sustainability and jobs. The ultimate goal is to eventually connect all of the towns of the Lost Sierra by multi-use trails. The vast network would not only create an adventurer’s dream scenario, with proposed cabins at halfway junctions where riders can refuel and camp but also, for Williams, virtually blend the Lost Sierra communities into one. 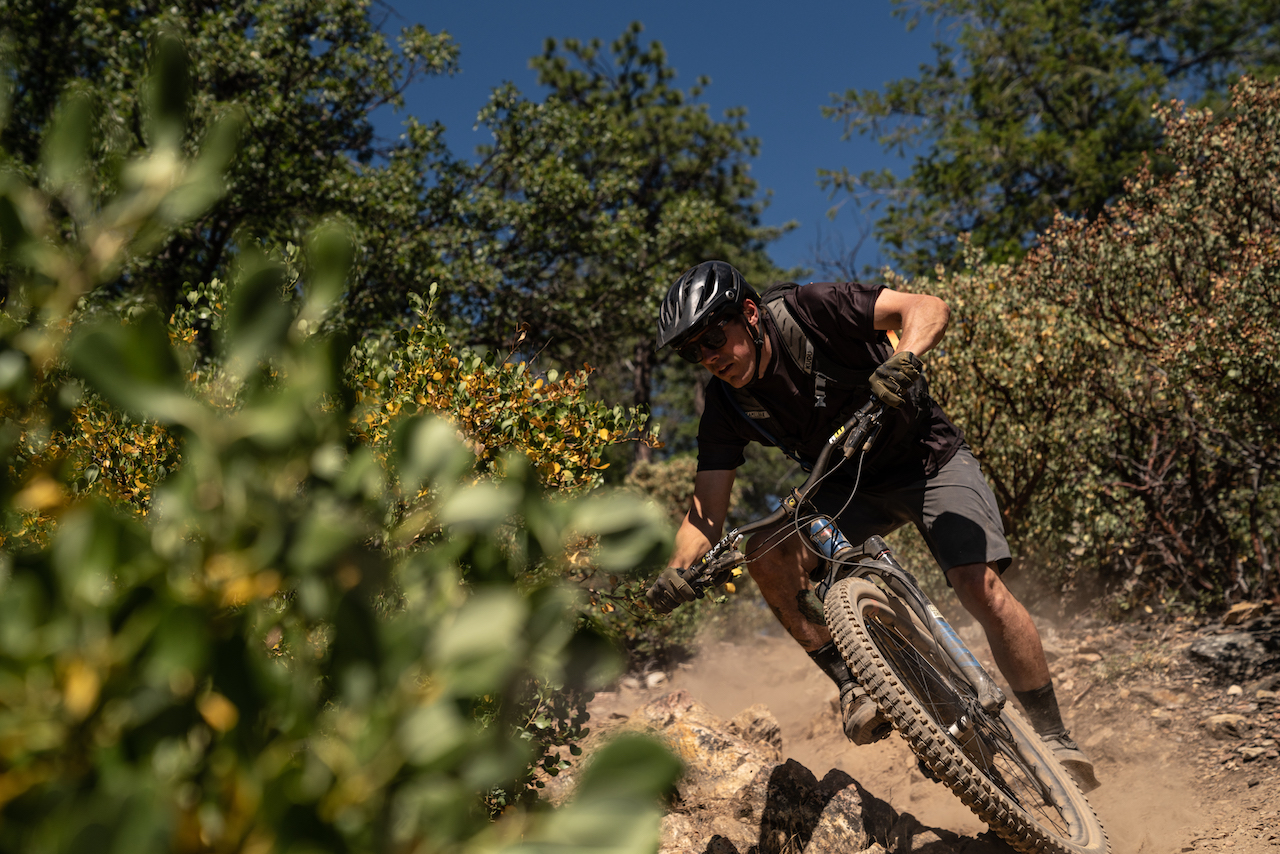 Becker, Williams and I descended for the better part of 45-minutes and sweated in the late afternoon sun back down to Graeagle, where Williams loaded us into his pickup truck and rushed us to the top of the mountain. As we piled out, he nodded, “Enjoy the ride, boys,” knowing full well that Mill Creek Trail’s descent of more than 2,500 vertical feet in 7 miles would leave us grinning ear to ear regardless of our exhaustion from our earlier ride in the Lakes Basin. Just before dropping into Mill Creek Trail, we stood on the deck of the fire lookout. A man inside watched the local news, unfazed by our presence; he was likely visited by strangers a dozen times a day. From the deck, we could see across to the mountains in Downieville on one side; on the other, we could peer back down on the Lakes Basin. On one horizon, we took in where all of this began for Williams and the Stewardship; the other horizon expanded out to where their vision was headed. Foot by foot, Williams’ dream of one day connecting the whole of the Lost Sierra by trail is slowly becoming a reality. Words and Photographs by Brett Rothmeyer