This Land Is Your Land

For the better part of 20 years, I called myself a cartographer. So what nerdier thing could I do to pay homage to a career that eventually merged with my mountain bike life than to travel to the last-mapped region in the United States? Even though I knew that Grand Staircase-Escalante National Monument and Capitol Reef National Park would not serve up the doses of sweet singletrack I was used to, I liked the idea of not knowing what kind of adventure was in store. In fact, it was kind of refreshing to have the chance to change things up a bit. As I boarded my flight from Denver to Moab, I wondered what it would be like to not stare at narrow ribbons of singletrack for days on end.

I finally had the chance to look at some glorious scenery and contemplate mountain biking from a perspective not solely focused on the trail itself. Since my mapmaking days, I’ve been closely connected with the trail-building world, and I would say that the mountain bike community has all but mastered the art of building great trails. 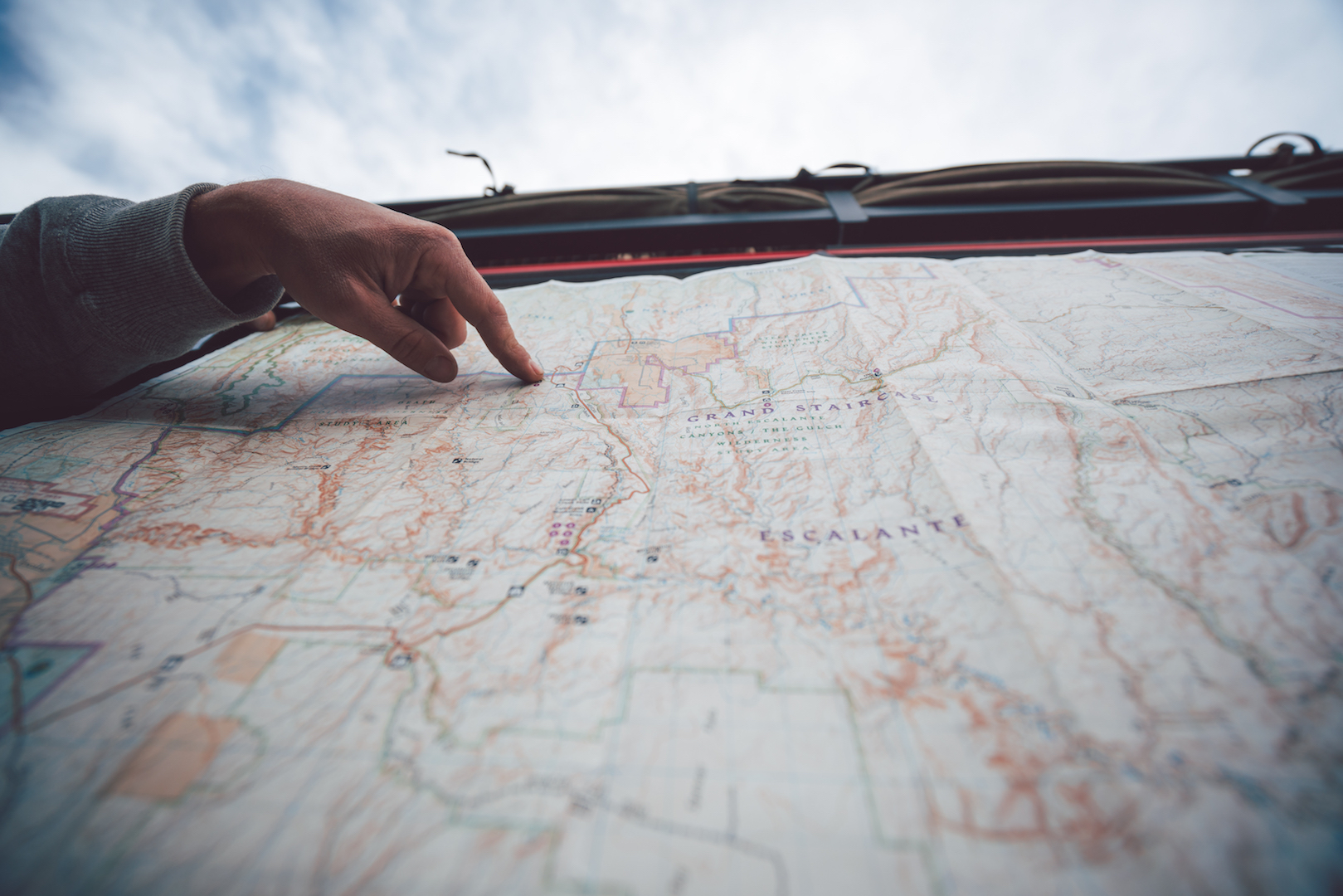 I considered the bigger picture and how many mountain bikers really understand their sport beyond the trails. Do people know who owns the land and who gets to decide how it gets used? I think some people would be surprised to learn that it’s a choose-your-own-adventure situation, depending on the land itself.

The answer to the first part of that question is easy: We own the land, at least in the case of Grand Staircase-Escalante National Monument and Capitol Reef National Park. All federal land is owned by all Americans. It’s the second part of the question that’s more complicated. When we think about government, we often think about rights, which leads to more questions. What, exactly, are our rights on these shared lands? Do we have the right to visit them anytime we like and do anything we want out there? And what happens when the thing we want to do runs quite literally into something someone else wants to do out there; how do we marry our interests and theirs? 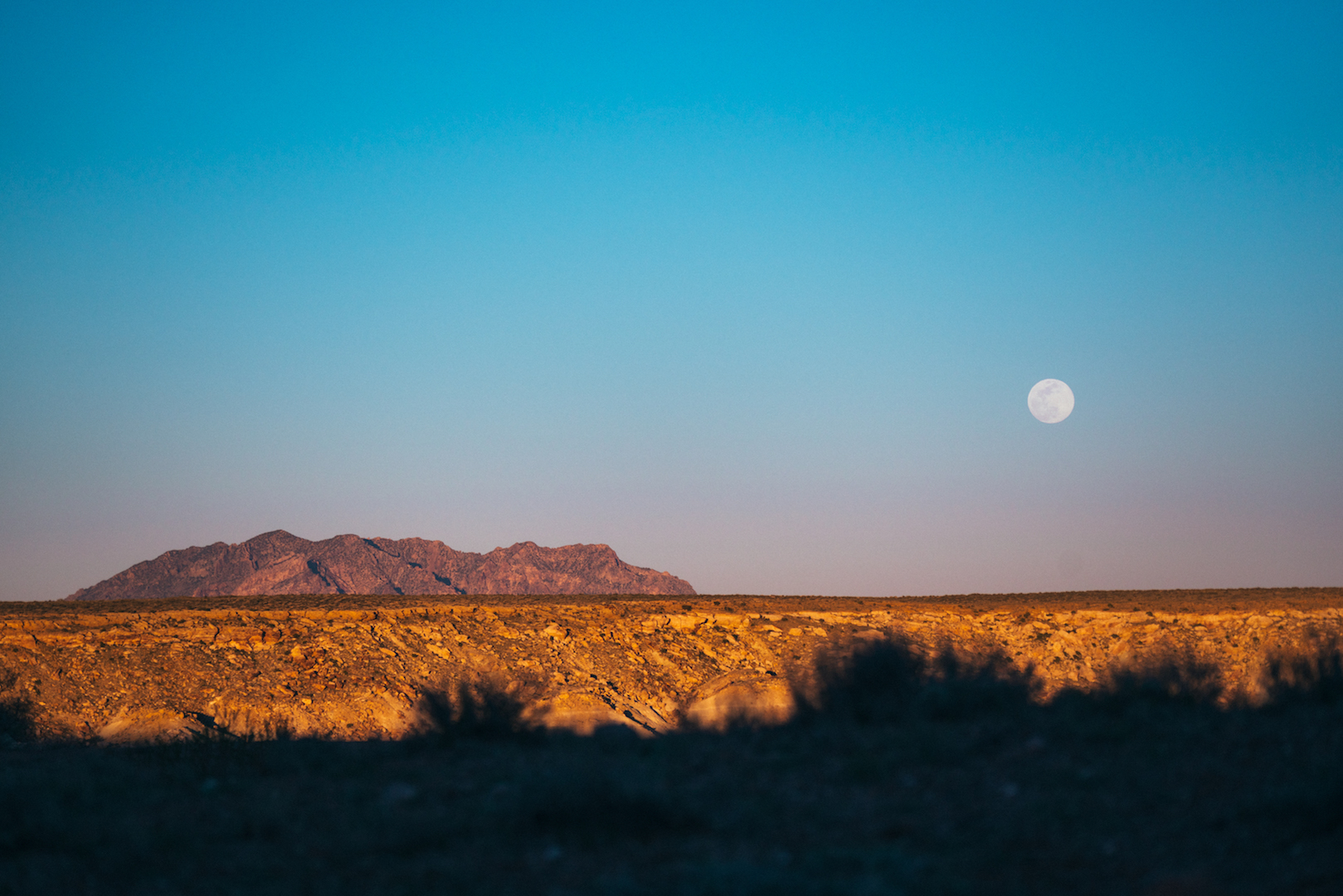 In a matter of a week, my mountain bike adventure crisscrossed a handful of other activities. I passed people in cars pulling boats destined to float on Lake Powell, as well as cowboys herding livestock across a stark landscape of sandstone and sage. I smelled the sunscreen of hikers sharing a vista over Waterpocket Fold and listened to the dirt and gravel crunch beneath my tires as I rolled past an oil-drilling rig getting ready to be put into action.

Riding through Grand Staircase-Escalante National Monument was quite fitting to ponder mountain biking beyond the trail. In 1996 it was designated, protecting 1,880,461 acres of federal land. In 2017, the area of protected land was reduced by nearly 47%, to 1,003,863 acres. 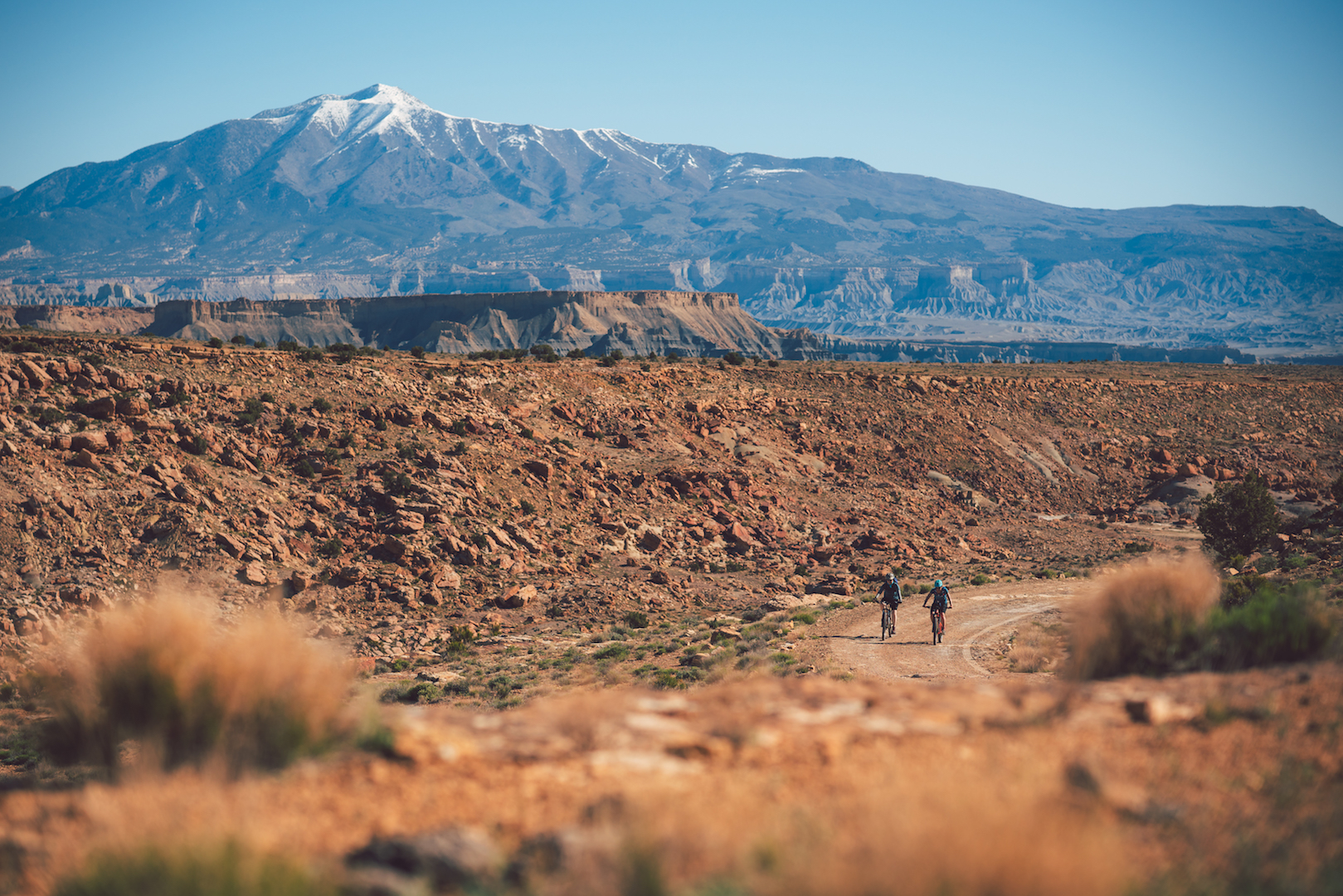 To examine the question about rights and uses in this part of the United States, you have to look backward and learn a bit of history. First, there were the indigenous people, the ancestral Puebloan who farmed in the canyons and the Fremont who hunted and gathered below the plateaus. Then came the settlers who came to live off the land — to farm, to mine and to do whatever it took to survive. It was not easy, and, in some places, nature and the landscape prevailed with vast tracts of amazing rock formations under breathtaking vistas never to be settled. Eventually, these became the responsibility of the Bureau of Land Management, a federal agency that works for the American people (that’s us). At that time in history, we (the American people) told the BLM to carry on with the predominant adventures of the time: mining and grazing.

But these amazing landscapes had other values, too, including archaeology, geology and paleontology. The potential for learning was off the charts, so much so that President Bill Clinton created Grand Staircase-Escalante National Monument in 1996. Locals in the region were quite unhappy. They saw the land as theirs on which to make a living and a life, and they were opposed to the federal government deciding that the lands would have a different purpose. 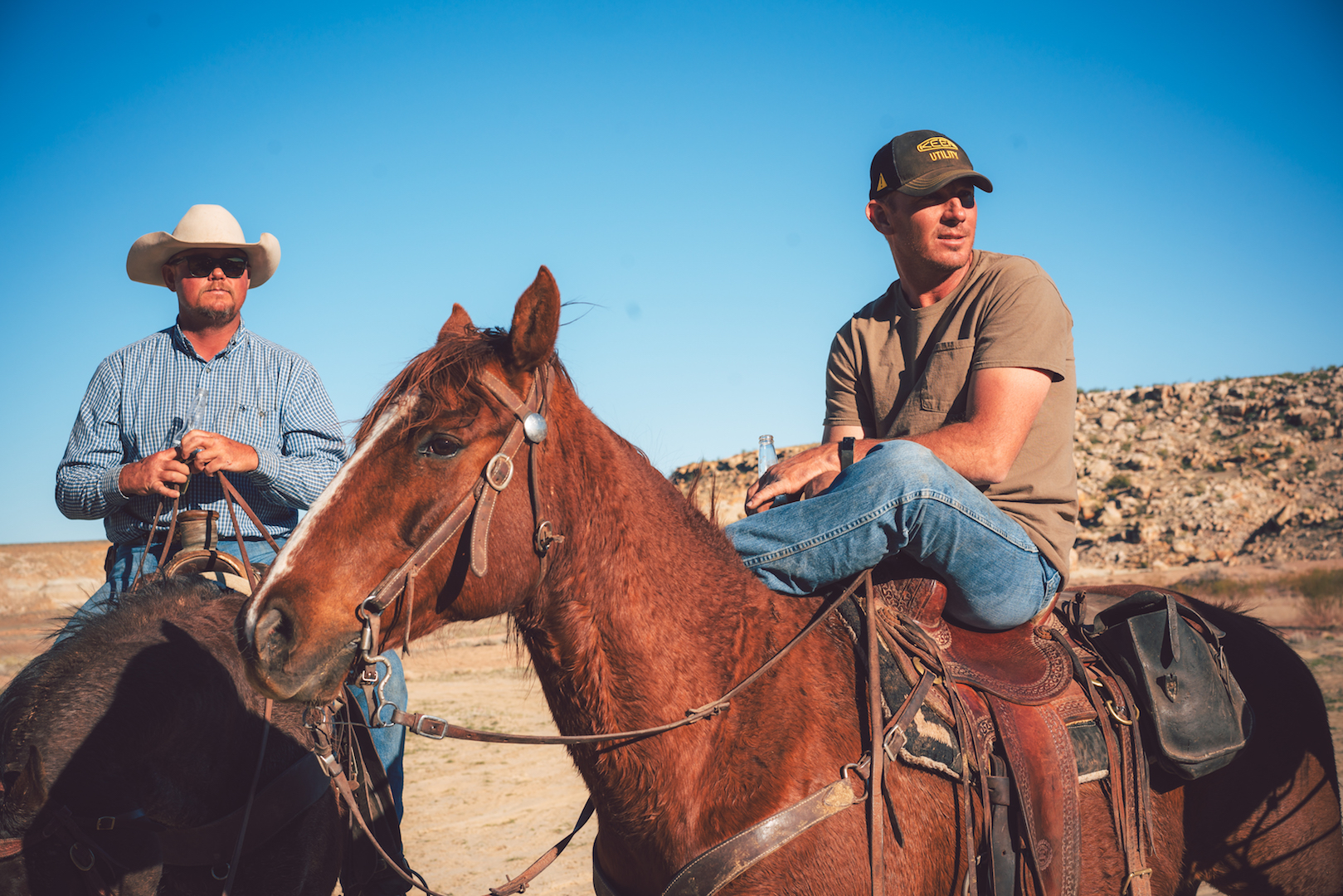 At the same time the national monument was created, Ashley Korenblat, IMBA’s then-president, was living in Utah and saw the opportunity to bring revenue of a new kind to the communities in the Grand Staircase-Escalante region by way of something called the recreation economy. In a nutshell, it’s essentially people living in places who can choose where they want to live and want to be near the great outdoors. Korenblat met with President Clinton to discuss this idea of adding recreation to national monuments, which ended up being long and hard work. IMBA eventually succeeded in including recreation as a value to be protected in a monument. One great example of this is Fort Ord in Monterey, California, where the Sea Otter Classic event takes place every spring. When Fort Ord was designated as a national monument, bicycling was specifically mentioned in the declaration.

This is important because unless a law, policy or presidential proclamation specifically allows riding, there is no automatic right to ride your bike on any of our public lands. This is easy to forget in places where we are building trails like crazy, but important to remember in places where there are challenges to both the trails and the landscapes around them. And the Grand Staircase, fresh in the minds of many, faces some of those major challenges. Leaders in Utah, like Senator Mike Lee and others, have convinced President Donald Trump to reduce the Grand Staircase-Escalante boundaries and open those lands to mining and other development. These changes could ruin businesses built and growing strongly since the national monument was established in 1996. During the daily travels on my bike, I participated in the local recreation economy by sleeping in hotels and eating in restaurants — places that have created jobs and prosperity across the region’s communities.

On the last night of the trip, while listening to friends play guitar and sing “This Land Is Your Land,” I pondered the outcome of this challenging situation. In the end, how will we as Americans decide how to use these lands? Which adventure will we choose? Currently, the issue is in the courts: A large group of environmental- and recreation-related organizations is suing the Trump administration. They believe the law that allows presidents to create national monuments specifies that subsequent presidents can not roll back boundaries, but rather that those types of adjustments can be made only by an act of Congress. This court case is just one of the battlefields in the bigger war over our public lands: Should we use them or protect them? And where does mountain biking fit into that conflict? Are we just another “use” or are we part of the “protection” strategy? 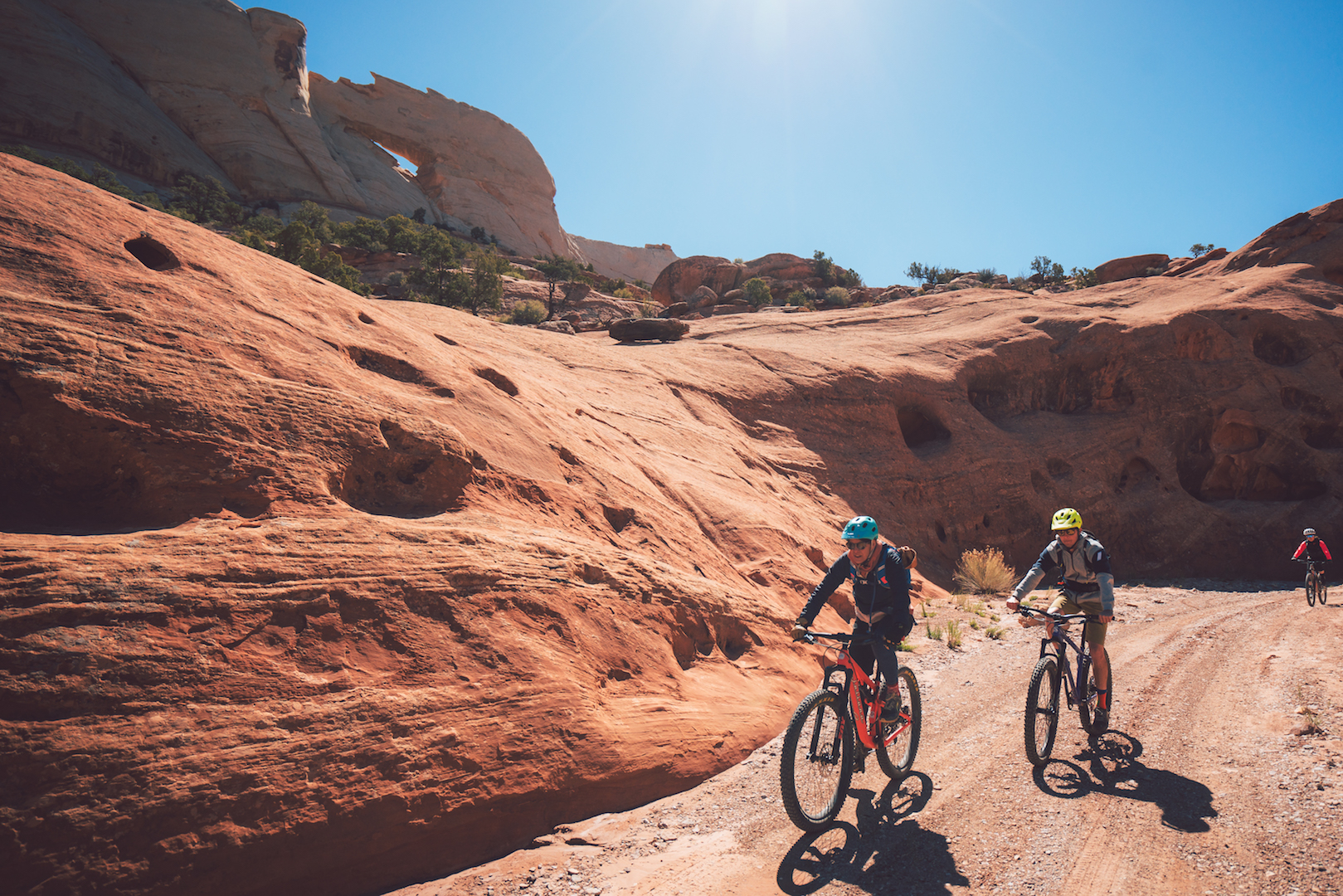 I would argue the latter. With a growing realization that survival of our species requires the protection of our natural places, mountain biking, an adventure that allows us to experience the dirt, the forest, the clean air, has evolved as a key part of the protection strategy. The proponents of the recreation economy are working to prove that there can be economic prosperity using fewer natural resources and protecting more places in their natural state. It is possible to live in harmony with the land and use our resources sustainably so that after a hard day at work, we will all get to go for a great ride in a beautiful place without the threat of it not being there in the future.

Words and Photography by Leslie Kehmeler
Editors Note: Leslie Kehmeler is our Access editor and she spends her time traveling the globe in search of great riding destinations as well as great stories to bring back to you the reader. If you would like to keep up on everything Leslie is up to in the coming year be sure to SUBSCRIBE Today!