Editors Note: I have to be honest, I was digging through the back catalog of Dirt Rag’s searching for a ghost story, something Halloween related when I stumbled upon Watts’ “Vanzig” story from a few years back. While not a spooky story per se, it is a story I quite enjoyed. So while we are at what is possibly the crescendo of the “van life” let us relive the Feral Life of Watts Dixon and the beginning of a tumultuous between himself and Vanzig.

Words and photos by Watts Dixon

feral
1: of, relating to or suggestive of a wild beast <feral teeth> <feral instincts>
2 a: not domesticated or cultivated  b: having escaped from domestication and become wild

I thought I was doing the right thing, approaching the cop. Being proactive. Humbly and apologetically explaining why my van was going to be in a one-hour-only parking spot at the rest plaza for the next six hours. With his attention focused on whatever he was shoving in his fat, mustached face, he gave me only the barest of a sideways glance. A hostile one. “That’s bullshit if I ever heard it,” he said dismissively. “You have one hour, then you better be out of here.” Floored, I tried again, and he cut me off with a backward jab of his thumb: a universal gesture for “get moving.”

“Wow. Thanks for your all understanding and help, officer,” I said. And then, as I walked away, knowing it would complicate everything, but unable to stop it, a departing middle finger thrown over my shoulder: a universal gesture for “get fucked.”

We were somewhere in south Florida … too many hours into too long of a day. Traveling around, chasing the sun, riding our bikes and doing our best to wake up next to rippling blue water and warm wind somewhere in the Keys the next morning. We didn’t even really need to stop, but we’d had a bit of a debacle at the toll station that demanded “cash only” that we didn’t have. So we stopped to get money, pee and move our legs. Efficiently taking care of our business, we jumped back in the van.

I turned the key … and all of the light flooded out of me. For no reason at all … because I knew it was useless … I tried again. Nothing. Not even some semblance of an engine turn … just the momentary hum of the fuel pump. And silence. I knew that silence well. I lowered my head to the wheel. Then I turned back to my son, Milo, blithely playing with his toys in the back seat. “Hey, buddy … so, umm … bad news.”

At this point, Milo is used to it. We’ve woken up in all manner of places. Office parks. Driveways. Hotel parking lots. But a toll plaza is a far cry from the Keys.

I’m sure that to the hard-line “van life” community I’m a bit of a poseur in that, no, I don’t live out of my van 24/7. In that I co-parent a little boy and own a local business. In that I have anchors that tie me in place. But anchors are very different from roots. And being anchored to a place is a different thing from being rooted. Because anchors can be raised, sails set and sunsets chased.

I’d awoken with the sunrise just beginning to pour into the rear window of my van one day, and with bleary eyes I read the words that were painted there: Live free. Like the bells that chime every time I take a turn or hit a bump, they were a remnant of the previous owner. Not something I’d have likely done myself, but somehow appropriate. Or ironic. Or… not. So I kept them.

My own stint with domesticity ended badly. Maybe “badly” is the wrong word. Dramatically. I didn’t just escape. I chewed out of my cage, tore up the house, bit everyone in sight and basically shit everywhere. Everywhere. And while I can’t recommend that people go about things the way I do … ever … I do recommend that they fight tooth and nail against the things that oppress in their lives. Be it mundane and suburban, sweeping and global, or private and stifling.

The feeling of despair and despondence that overwhelmed me when my (now) ex and I went shopping for a new dining room table, almost 12 years ago is still palpable. Like the overwhelming despair you feel in second grade when the crushing realization hits you that you have at least 10 more years of sitting in desks being yelled at by unhappy people for having your head a thousand miles away. We didn’t need a new table. And yet … there we were. There was some expectation of where our lives went now. Living in a house had to become owning a house. Loving each other had to become marriage. Marriage had to become having a baby. Having a baby had to become getting jobs that we probably didn’t want so that we could afford this new lifestyle. Afford a new dining room table. A table we didn’t need. 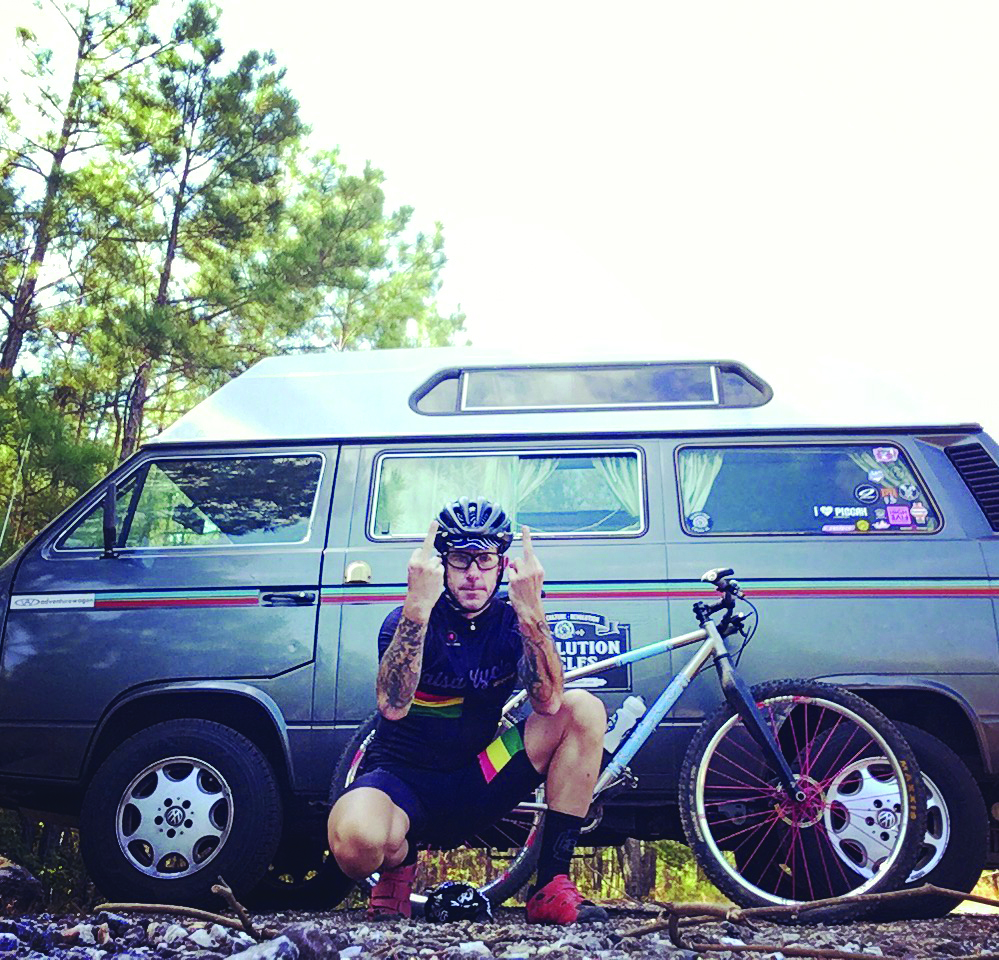 When we were young, it was fun to play at being old. At being rooted and domesticated. But at a point the play got old. The characters got stale. The plot boring. The themes hollow.

On some level, we all feel it. But some people feel it more acutely than others. To call it wanderlust is to make it a cute little Pinterest page. Make no mistake … it’s a mania.

I named her Glenn Vanzig at one point, but I never call her that. Nor is she really a she. Or a he. She’s a “you.” And when I get behind the wheel and smell that familiar smell … feel the rumble of her start … before putting her in gear and heading down the road … wherever we’re going, I always pat the dash and say, warmly and quietly … “Hey, you.”

Vanzig is a bit rare in the Vanagon world in that she’s not a Westfalia. She’s an Adventurewagen spec’d and built by the recently deceased Ed Anderson. Aside from the obvious and striking high top versus a pop top, the internal layout is also very different from a Westy, with weathered wood cabinets and bulkhead that are almost nautical.

I have my brother, something of a Vanagon fanatic, to thank. I’d been passively looking for a while, and one day in spring of 2011 he sent me a Craigslist link with a message in all caps saying only “GET ON THIS!” A week later I bought a one-way ticket from North Carolina to Alabama to pick it up.

I made it almost halfway home before the transmission exploded.

The next year is a story in and of itself. Shady mechanics. A lot of time on the side of the road. Eventually, I got hooked up with a stateside Brit named Paul Pearce who specializes in Vanagon repair. From there it all fell into place. Look, I don’t give a shit how DIY you are … cultivating a good relationship with a baller mechanic is absolutely key to “van life.” That way, when you’re rolling out of town on a monthlong slog and your “check engine” light comes on, or your power-steering reservoir decides to shit the bed … you can roll by, and he’ll pull one out of another van and dial you in. Or when you break down in God-knows-where, he’ll talk you through getting mobile again. One of the keys to getting me mobile again was doing an engine conversion. While Subarus tend to be the most popular, mine is actually a Ford Zetec. A relatively easy setup done by a company called Bostig, but remember, kids … even a relatively easy conversion is a complicated mess, and you will hit snags. Parts that aren’t available. Pieces that don’t fit. Fittings that need fabricating.

As much as I may love tinkering on bikes … I admit, tinkering on cars has never been high on my list. So if I could make the Vanagon into a reliable, bombproof travel buddy, that’s what I would do. One I could drive all over the country, take to races and live out of for extended periods.

And that’s what I have. For the most part.

Aside from any of the small things that will always plague a 30-year-old automobile, it’s almost always been the starter for me. Something about the orientation of the engine that just bakes it in heat. I’ve become well-versed in the use of the “starter hammer” with which to love-tap obstinate vans into action. And hot-start relays have helped. Sometimes. But soon enough, they got baked as well. And I’d find myself dead in the water at a gas station. Or a toll plaza rest stop. Giving the finger to a belligerent cop.

A new starter and a homemade heat shield seem to have fixed it. Knock on wood paneling.

I’m actually writing this from the road. Parked at the Santos trailhead in Ocala, Florida, sipping coffee at the table in my van. Having fled the rain in Greensboro, North Carolina, in search of sun and warmth. If only for a bit. A feral stint.

A few years ago … I had a choice. The lease was up at my shop; I could sell my inventory and be done with bike retail. It wasn’t a bad time to get out. Instead, I took the extremely modest amount of poker chips I’d accrued in this screwed-up game and pushed them back in. But as I did so, I made a promise to myself that it would be on my terms. That I would set up the shop in such a way that I could disappear the way I need to. I’d pursue mobile work … and live on less … as long as I could raise anchor and go seafaring. And the beauty of my unconventional job is I can make that work.

This isn’t reducing to instinct. And it’s not plunging into self-absorption and ignoring roles and relationships and responsibilities. It’s just examining the ones that matter and the ones that don’t. It’s letting go of that expectation: the expectation of what you do next. Of how you’re supposed to live your life. It’s about taking that fucking dining room table … that gilded door off your prefab home … that Ikea standing desk in your cubicle … chopping it up, and using it as firewood. Somewhere outside. Under some sky.

If you would like to read more from Watts’ he writes a regular column “Hangdown In The Wheelstrings”each and every issue of Dirt Rag. Subscribe here and never miss an issue!