Down the Bitterroot Mountains

Words and Photos by Kristin Winet

The front entrance to the welcome center is not entirely legible, because years of snow and harsh Idaho winters have rubbed the black paint into a faint gray. The tip-off that we’ve made it here is the parking lot, which is full of cars and trucks and tourists, many—but not all—of whom already have their bikes and helmets but who simply need to get a day permit. We can also slightly make out the name on the front of the building: Lookout Pass Ski Resort, which means it’s official: we have made it across the panhandle, have made it to Exit 0, the exit that straddles, much like the ride we’re about to do, the Idaho-Montana state line.

Even though it’s hardly a minute past 8 a.m., the welcome center is already busy, full of families and kids trying on helmets with headlamps and adjusting their rental bikes to fit their diverse body types. There’s an electric buzz to the room, a kind of hurriedness, as if no one actually wants to go through this extra step—everyone just wants to kick up their kickstands and hit the trail. After all, it’s a sunny July day, and what better way to spend the day than hauling the whole extended family along on a fifteen-mile-long mountain bike trail that winds through the Bitterroot Mountains of northern Idaho and western Montana along an old 19th-century railroad? Who wouldn’t want to hit the trailhead as quickly as possible? 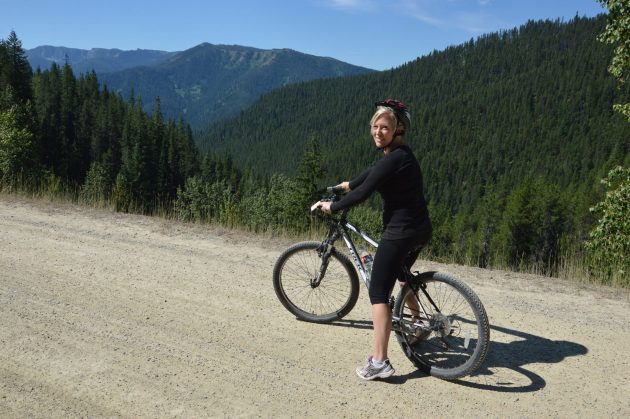 Nobody except my husband knows this, but, well, me. I’m literally the only person in our group of sixteen extended family members who hasn’t been on a mountain bike since I was a kid. On our drive over from our family cabin at Spirit Lake, I remember the pleasant parts of biking: the grippiness of the bike tires on the dirt, the smooth way the gears shifted from one to two to three, the fresh breeze whipping through my hair and turning my cheeks pink. But I also remember things like teetering into a prickly bush, like falling off while trying to maintain my balance at a stop sign, like being unable to keep up with the more elegant riders in the group when we went on rides at the park and in the woods at home in Atlanta, Georgia. I don’t tell anyone this, of course, because if my husband’s 11-year-old second cousin and his grandpa can do it, so, certainly, can I.

Plus, to bike down the famous Route of the Hiawatha Trail is kind of a rite of passage for bike enthusiasts who visit the Northwest, and complaining about getting the chance to do such a scenic—and award-winning trail—is like going to the Grand Canyon and complaining that you don’t want to share the trail with the donkeys. When the opportunity presents itself, you take it. Besides, the Hiawatha Trail hasn’t only been designated a “Hall of Fame” trail by the Rail-to-Trail Conservancy—a coveted title held by only 15 trails in the United States—but the scenery was long called the most beautiful stretch of railroad in the entire country. 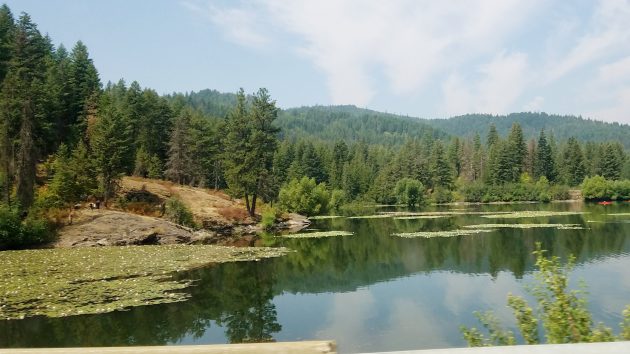 It certainly had its heyday, too. When the Milwaukee Railroad started operating there in the late 1800s, the path immediately became renowned as word spread about its precarious path and the way it opened up our nation’s understanding of the landscape of the West. Not only was there now a way to move people and objects through some of the most rugged mountainscapes of the Northwest, but now, passengers of any mobility and age could sit in the comfort of their train cars and watch as they traversed through nearly 50 miles of uninterrupted, serene natural beauty that had been otherwise inaccessible to them. The trails operated for nearly 150 years, until the last passenger train, the Olympian Hiawatha, rumbled down the trail in 1961. Not long after, the last railroad filed for bankruptcy. The shutdown of the railroad rumbled along slowly, and the last train west of Butte passed through the area in 1980.

Today, the spirit of opening up this spectacular stretch of land continues with the wilderness bike trail, which, despite the fact that riders must be able to operate a bike on their own, offers a unique opportunity for people of varying abilities to learn about the history of the American railroad—and thus the history of the American West—while riding down a gently-sloping fifteen miles of the original railroad trail. The trail, which officially opened in 1998, takes riders across Idaho and Montana, through eight gravel-road tunnels, and over seven wooden trestle bridges. After the first mile and a half, I’m told, most of the trail is downhill, which is why so families tackle the trail together.

The employee, who is fitting me with my gear for the day, tells me this as he crams a plastic helmet onto my head and buckles the strap under my chin. “You guys starting at the Pass?” he asks.

He nods. “You’ll find out,” he says. “But you’ll need to make sure this works.” He flips my headlamp on and off and then takes a step back to inspect it from a distance.

Our drive to the trailhead only takes a few minutes (it’s seven miles away) and our rental bikes are waiting for us in a row when we get there. Though it’s still early, the sun already feels heavy and the light through the pine trees is casting a warm glow over the tunnel in front of us. As it turns out, we are starting at the Pass, which, to my horror, doesn’t seem to fit with the family-friendly advertising but that does, thanks to the prescient employee, require a working headlamp. The Pass, which is otherwise known as the St. Paul Pass, which is otherwise known as the Taft Tunnel, burrows more than a mile and a half under the Bitterroot Mountains right on the Idaho-Montana state line and thrusts you onto the trail on the other side. It’s the only non-motorized way to get to the trailhead.

Teetering on my bike, finding my balance, I wonder if it’ll be wet in the tunnel, or if the path will be uneven, or what will happen if I fall off my bike. Our family takes a “before” photo, when we’re all still put together and our hair is intact and our clothes clean, and we pummel into the tunnel, one after the other. I watch as my husband’s cousins, second cousins aunts, uncles, parents, and grandparents pedal their way into the tunnel carved into the mountainside, the backs of their bodies disappearing one by one, and I think about the massive history of this trail. Along the way, we’ll see signs along the trail featuring photos and stories, all describing the staggering amount of human labor it took to build a railroad through this kind of terrain, and we’ll think about the fact that this ride isn’t just about conquering a mountain—it’s an initiation into the Western imagination.

The tunnel really isn’t all that bad, either—it’s dark, yes, but with a peppering of headlamps and slow-moving bikes passing through it, it feels more like a ride in a flat park at night than a dangerous black hole. Over the next few hours, my extended family and I wind our way down the mountains on the gently-sloping trail, stopping every few hundred feet to take photos, to soak in the scenery, and to marvel at the fact that a rail car ever made it through here, unscathed.

By the end of the day, all sixteen of us will successfully bike our way down the trail, the caboose of our ride being our 11-year-old second cousin, who, as we all watch and cheer, will steer around the last corner of the trail, pumping his little legs as furiously as he can, the wheels of his bike spinning round and round and round, back into the bright Montana sunshine.

Trail passes, shuttle tickets, and bike rentals are available at Lookout Pass Ski Resort on I-90, off Exit 0 at the Idaho-Montana state line (near the small Western town of Wallace, Idaho). The shop is open from 8 a.m. – 5 p.m. daily from the end of May until the end of September, and the trailhead, which is open on the same dates, is a short 7-mile drive from Lookout Pass. Trail users must obtain and display trail passes, which cost $10 for adults and $6 for children aged 6-13 years.