Editor’s note: This review originally appeared in issue 206 of Dirt Rag Magazine. Like what you see? Subscribe now at dirtragmag.com/subscribe to catch issue 208, coming real soon. 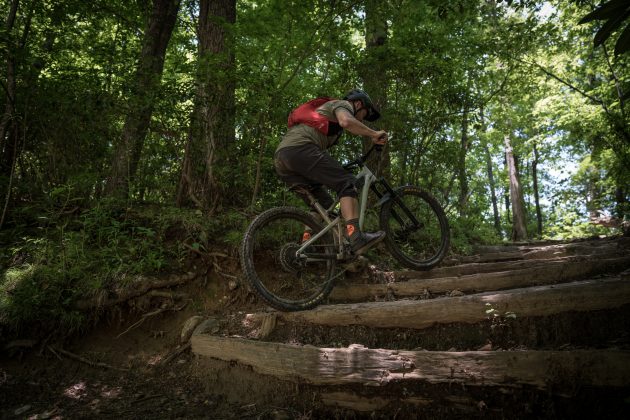 The 5010 might be the most famous bike in the Santa Cruz line. Not the V10, which has won countless downhill races at the highest level. Not the Nomad, everyone’s favorite overkill machine. The 5010 isn’t the most famous because it sells so well and is commonplace on the trails. It is famous because a certain Scottish lad with the surname MacAskill has ridden this bike in some of the most-watched mountain bike videos ever created.

But unlike the V10 or the Nomad that need both hectic terrain and a talented pilot to really come alive, this well-sorted trail bike feels awesome front flipping off urban staircases or just plonking around at mere mortal speeds in the woods. 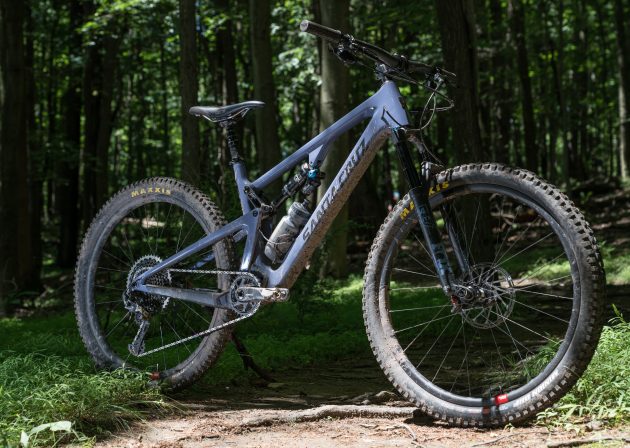 This is the third version of the 5010. Much like the previous update, this one doesn’t make any massive changes, and that is A-OK. Travel is still 130 mm front and rear, and the wheels are still 27.5 inches, but everything else is new.

The biggest change is to the swingarm. With the room made available with the elimination of front derailleur compatibility, the old singular swingarm-upright is gone, replaced by a double upright. This creates better triangulation, which leads to a stiffer rear end. The symmetric rear end makes it much easier to balance stiffness from side to side. All cable routing is internal now, using internal guide tubes that make service easier and prevent rattling.

The frame will clear tires up to 2.8 inches. That clearance marks a departure for Santa Cruz. Rather than offer the 29-inch Hightower and Tallboy with an option for 27.5 x 2.8 tire, the new Bronson and 5010 will have the option of 27.5 x 2.6 tires from the factory on new Reserve 37 rims. There is a small flip chip to adjust geometry, mostly there to keep the bottom bracket from getting too high with taller tires.

The geometry gets a little longer in the top tube, and the head angle gets closer to 66 degrees, a pretty slack number for a 130 mm bike. This bike is approved for “over-forking”; Santa Cruz won’t even blink if you want to install a 150 mm fork up front for more party. The seat angle is a modern 74.9/75.2 degrees.

Santa Cruz doesn’t talk much about its suspension designs these days. I felt like there might be a bit more anti-squat going on, so I asked about this and product manager Josh Kissner said “Yes, a bit more anti-squat, but also stiffer, dual uprights, which gives it a more responsive feel. Mostly the change we worked on was improving the leverage curve, for better small bump and more mid-stroke support. Basically decreasing the amount of falling rate at the top of the travel.” Unlike the Nomad and new Bronson, the 5010 retains its upper-link-driven shock. The lower-link shock helps to keep mid-stroke wallow at bay and to create a more linear leverage ratio. But with only 130 mm of travel, the 5010 does not have much mid-stroke to deal with.

The seat tube is very short, leaving me plenty of room for the stock 170 mm dropper post on a size large. Even with a piggyback shock, there is room for a decent sized bottle inside the main triangle.

The 5010 is available in aluminum and two levels of carbon frames. This is the high-end CC carbon bike with X01 build kit and Reserve 27 carbon wheel upgrade. Complete aluminum bikes start at $2,699, and carbon tops out near $10k with the new XTR 12-speed group.

Most brands continue to push longer-travel bikes to consumers, but quietly the shorter-travel bikes are getting better and better. The 5010 is a perfect example of that. I’ve seen this bike send road gaps, bump-jump big transfers and find its way carefully down a sketchy section, all with different riders on board, all seeming happy to ride the way they wanted to ride, the 5010 untroubled by being manhandled or finessed.

In other words, this is a mountain bike. It isn’t designed to race any kind of discipline, but it also wouldn’t feel too out of place lined up for an enduro or cross-country race. Under the right rider, even a dual slalom wouldn’t be out of the question.

But under this rider, the 5010 felt like home. The riding position is modern without being extreme, and the build kit is solid and ready for hard riding. The 5010 is the type of bike that likes getting into trouble, although with the limited travel it also laughs at you when you send it a little too hard into that rock garden or a line choice goes wrong and things get hairy.

Swapping the stock 2.3 Minions on Reserve 27 wheels to 2.6 Minions on Reserve 37 wheels added some charge-ability to the 5010, although it also gets slower under power. It is interesting how standard 2.3s are feeling small these days and maybe even a little skittery after spending time on 2.4-2.6 tires. I liked the 5010 with the bigger tires, but would probably swap the rear tire to something faster most of the year, saving the massive traction of the DHR2 for the sloppy season.

The long front center and slack head angle keep the 5010 in control on steep chutes, yet it somehow manages to keep from wandering around on climbs. For riders that are more apt to roller over rough terrain than air over it, the 2.6 tires help to keep things in check when sticking to terra firma.

Pedaling is efficient enough to be an afterthought while riding. The 5010 scoots up climbs quickly, although it can be hard to find enough rear traction when standing on greasy climbs. As per usual, this modern trail bike does better sitting and spinning rather than standing and mashing. The platform lever is easy to reach on the Fox DPX2, but I barely touched it.

The 34 fork and rear suspension matched up well. Both had a nice steady ramp up from the soft, but not too soft, beginning stroke. For a bike that will get rallied hard on long descents, the DPX2 is a great choice, with the piggyback reservoir helping that little shock stay cool as it gets overworked on rough terrain. Even coming up short on a regular basis, hard enough to burp those 2.3 tires, the rear suspension never bottomed harshly.

There are a lot of good trail bikes on the market today, and the 5010 goes head to head with any of them. I have a few bikes that are touchstones that I compare other bikes to, and the 5010 has found a solid place in that mental space, joining bikes such as the Trek Fuel EX, Pivot Switchblade and Rocky Mountain Thunderbolt.

Unless you have dreams of spandex victory or big mountain goggle-bro triumph, the 5010 will serve almost anyone well. Santa Cruz calls it the “thrasher’s all-terrain play machine,” but don’t let that scare off the less shreddy among us. The 5010 is a versatile bike that is happy with both weekend warriors and full-time shredders behind the bars.