I’ve lived in Salida for just a year and a half, but in that time I’ve gained the reputation of being a go-to for checking out the status of remote trails/locations. This ride was one I’d had in the back of my mind for a while, but when I was tasked with two scouting missions that involved the territory, I decided it was time.

Mission number one— If you haven’t heard, the Vapor Trail 125 race was canceled this year because of a rockslide on a critical part of the course. The Forest Service won’t issue a permit for a course that uses that route. As always, the rumors immediately start flying- “I heard it was really small/insignificant/already cleared, but they’re caught in red tape, etc.” Tom Purvis (head honcho for Vapor Trail and Salida’s Best Kept Secret) asked me to investigate it and take a few pictures to quell the speculation. The mission would involve a quick but rugged out & back from the “normal” way one would ride my planned loop (see the “tail’ in the route link below), but I was game.

Mission number two— Another local race promoter, Keith Darner, wanted intel on a trail called Horseshoe Creek (for the possible addition of the trail to the Monarch Crest Enduro). It’s a trail that’s accessed the same way as the much more popular Canyon Creek loop. 99.9% of people pass it by when riding Canyon Creek because it involves a little more hike-a-bike, and the rumor is that it’s not “good”… though “good” is never operationally defined in the conversation.

I decided that, since I was on a mission to capture downhill images of a trail, I’d break out the GoPro. The video is about as “okay” as you’d expect from someone not using a gimbal of some sort, but it was highly effective for screenshotting parts of the trail. As an aside, since you’ll see a good bit of my bike and frame bag in the upcoming pictures, the bike is a Spot Mayhem (I’d be happy to give you more info on my bike setup if you want to email/message me), and the frame bag is made by Oveja Negra literally two blocks from my house.

The first half of my route follows the regionally-popular Canyon Creek route. My 9 a.m. start from the Snowblind Campground up Tomichi Pass Road felt brazen given the amount of time I’d be above treeline. However, I know how fast I can knock out the standard loop, so I was confident in my ability to get up and down just ahead of any afternoon storm danger. The first few miles of Tomichi Pass Road are easy climbing past multiple old mines and through the “towns” of Whitepine and Tomichi.

After about four miles, the road makes a hard right and gets rowdy for the first of many times. The right-hand turn would be pretty easy to miss if it weren’t for some creative signage (I accidentally violated the sign on the right). That first steep grunt will get your legs fired up. Luckily, there’s a cool spot to stop and sightsee where it levels off. I stopped there for a few minutes to eat a snack and explore the Tomichi Cemetery. 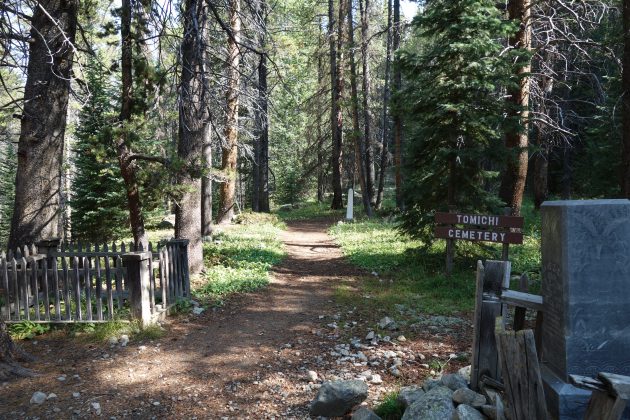 This part of the route is (well, used to be, prior to the rockslide) a popular 4×4 road. I was reminded of the first part of my mission and moved on to the meat of the climb. The climb up the rest of Tomichi is as steep and chunky as it is beautiful (the gain is around 1k feet in the first four miles and 1600ft in the next four miles). I make a conscious effort to never lose appreciation for just how amazing it is to just “be” in the mountains. I’m really, really privileged to live where I live and have the health and ability to propel myself to these places on a regular basis.

After sweating into my eyeballs for a while, I finally arrived at the turnoff for the Canyon Creek trail, just above treeline. I pushed (literally) on to complete mission one, located just over the top of Tomichi Pass. From the top, I couldn’t see the slide, so I had to go over and down about ¾ of a mile to find it.

When I found the slide, it was very apparent why the Forest Service wouldn’t issue a permit to cross it. While it didn’t look like much of a rockslide and was definitely easy to carry a bike over, it was unsettlingly soft, like standing on a pile of gravel. If it shifts too much under one’s weight, that person and all the unstable mountain rock above them would fall another hundred feet further down the mountain. I took pictures and GTFO off it very gently. 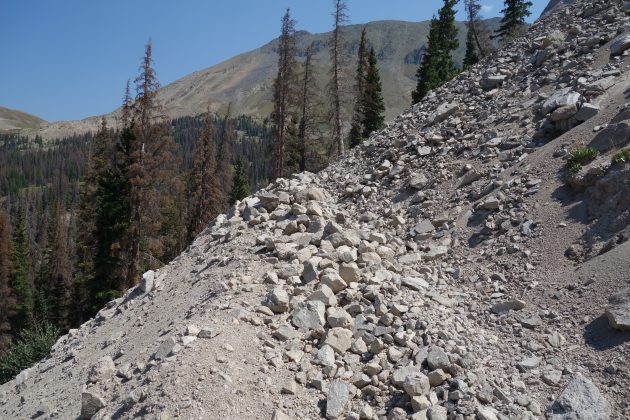 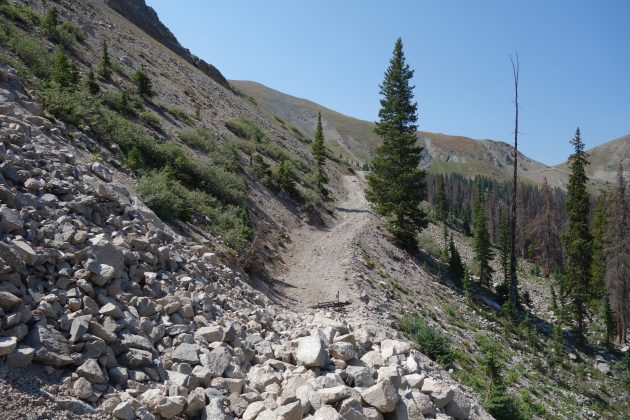 With Mission One completed, I scurried back up and over Tomichi Pass and down to the Canyon Creek Trail. The mile of trail to the top is a hike-a-bike that takes anywhere from 40-60 minutes, depending on how fast you push and how much you stop to take in the incredible scenery surrounding you. It’s a full-body hike-a-bike experience.

The climb tops out around 12,400 feet on the crest of an unnamed mountain (some people call it Granite Mountain, but that’s actually the peak next door. It’s home to a few pikas, tundra plants, and big, big views.

The next mile of trail plummets down along a ridgeline before veering off to the intersection of the Horseshoe Creek Trail. If you’re racing Vapor Trail 125 and moving at a reasonably quick pace, this descent is done in the dark. It’s a great excuse to invest in a set of 2000 lumen lights.

The bonus hike-a-bike to get to the top of Horseshoe Creek Trail is a short but extremely steep quarter of a mile. The terrain at the top has a weird and beautiful Stonehenge-esque feeling to it (OK, I’ve never been to Stonehenge, but the rocks at the top of the climb somehow remind me of pictures I’ve seen).

The traverse at the top was one of the most mind-blowing sights I’ve experienced. Every turn feels so close to the edge of the world that I could barely believe that a trail existed in such an amazing place.

The trail then begins to descend, gently at first with lots of rocks and large cairns that make it easy to sight where you’re headed. 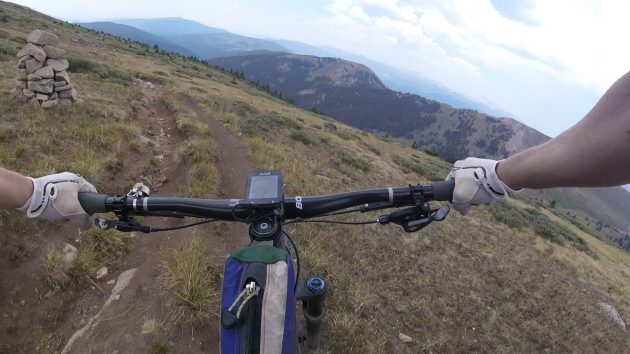 I’d seen on a topographic map that the trail would, at some point, take a hard left turn and continue down at a more rapid pace.

Following that turn, the trail becomes contentious. It loses approximately 2500 feet of elevation in four miles from that point. Get in, buckle up, and hold on tight, buddy. There are extended bouts of full-pucker, fall-line, moto trail gnarliness punctuated by smoother, flowy, fast sections that lull you into a false sense of “it’s ok to get off the brakes now.” Most of the time, I was thinking, “this trail needs Jesus.”

Somewhere in the middle, I get where people say the trail isn’t “fun.” It drops directly into Horseshoe Creek, which gets really wet, muddy, and almost impossible to ride for a few minutes until it emerges again further down the drainage. I pushed and carried through that section (I tend to err on the side of caution when I’m out solo) before getting back into it on the other end. The lower half is faster, chunky flow punctuated by slimy, narrow rock chutes and creek crossings.

It eventually meets back up with the bottom part of Canyon Creek Trail, where I stopped to take photos and further contemplate life. Mission Two, accomplished.

The last bit of Canyon Creek descending doesn’t suck, either. It also gives you one final reminder that hike-a-bike is awesome as it does a little uphill jive to avoid crossing ranch property that fences off the bottom of the drainage. As I was navigating said last-gas hill, I could hear thunder in the distance. My timing was perfect, as I arrived back to my car to the first tiny raindrops of the incoming storm.

Getting there: The most popular way to access the Canyon Creek Trail (and then the Horseshoe Creek Trail, as I did) is from Snowblind Campground and Tomichi Pass Road. There are other ways, but this one is the only one that gives you an easy-to-follow loop from an easy-to-drive to spot a few miles off of U.S. Highway 50. It’s about a 50-minute drive from Salida over Monarch Pass.

What to bring: A camera… you’re about to see some amazing shit. Pack water and snacks for 4-5 hours of riding and sightseeing, too. A filter probably isn’t needed as long as you can haul around 70 oz of water. It’s rarely hot; the Gunnison Valley is always about 10 degrees colder than what its elevation would suggest. On the way there, the temperature at the top of Monarch Pass (just over 11k feet) was 50 degrees, and the temperature at Snowblind Campground (about 9300ft) was 41 degrees. (insert “Aliens” meme here). If you’re starting properly early, you’ll need the appropriate attire for those temps, though the climb will definitely warm you up quickly. Also, bring an after-ride snack. It feels like an eternity to get back to town for a burger at the Fritz, and no one needs to drive Monarch Pass while bonking.