The early morning sun cut through the alpine chill as we assembled with our bikes at the remote backcountry trailhead. We double-checked our gear and sorted through food as the shadows retreated up Sol Mountain, preparing to head out on the heralded new Caribou Pass trail deep in the wilds of British Columbia’s Monashee Mountains.

“You can do more than you think you can,” Sylvie Allen said, and we dropped in.

Allen is something of a legend in the Canadian mountain bike scene, competing all through her twenties to her peak as the 2002 National Downhill Champion. She raced until she wasn’t having fun anymore, burnt out on the competition circuit. She turned to coaching, co-creating the immensely popular Trek Dirt Series mountain bike camps and building Sweet Skills, her own coaching business. She found herself on the edge of burnout again from the travel required for Dirt Series.

And then two things happened. She discovered backcountry riding, and she met Emily Slaco.

Slaco, now a well-respected mountain bike guide, worked at the time for sales and marketing with Tyax Adventures, which runs float plane-accessed backcountry mountain travel in the South Chilcotin, a hallowed zone in the annals of B.C. mountain biking. She started to notice that lots of women would stay behind in the campsites while their partners went riding. “Girls would come in and ask for suggestions for hour-long rides while they waited,” she recalls. “I’d ask why they weren’t out there too, and I’d always get the same story: I don’t want to hold anyone back.”

Slaco was already guiding on the side, so she started responding to that story with, “What do you need to get out there?” The responses led to the birth of her concept for the first-ever women’s wilderness hut-to-hut backcountry riding trip, a heavy adventure with guided support and zero pressure. “We’d help them get through it and build confidence, with the idea that they can go ride it again with anyone they want.” She just needed a powerhouse partner to run it with.

Backcountry biking breaks you down physically and mentally, and then builds you back up from the bottom, learning what your body can do and expanding your limits.

Allen and Slaco teamed up to lead North America’s only coached and guided backcountry mountain bike camps for women, now housed under Sweet Skills, with those first trips in the deep wilderness of the South Chilcotin. It’s one of those mythical places where different user groups harmoniously share space on protected public lands: hikers, mountain bikers, and horseback riders use the same trails without conflict (or very little of it, anyway). In fact, Tyax Adventures joined forces early in their existence with one of the older family names in the horse-packing business to optimize their backcountry mountain biking operations.

The South Chilcotin is also known for its remoteness. There are no roads, only old mining and horse trails from the Gold Rush days. Mountain bikers venturing into it have to be prepared for a different kind of riding: from navigating big mountain passes and managing wildlife; fending for yourself with tools, clothing, and food; and relying on your riding partners for safety, the South Chilcotin is the epitome of backcountry riding.

“Wilderness riding is a totally different beast,” says Slaco. “You’re riding trails not made for mountain bikes. It’s more raw, and sometimes we walk uphill for an hour. But you get to the top of a pass, and look around at these amazing vistas, and you can see all the way back to where you came from. And then you get to ride down 1,000 vertical meters.”

Anyone who’s ever done true wild riding knows that there’s something that hooks you. Everything is bigger: the climbs, the descents, the space. Backcountry biking breaks you down physically and mentally, and then builds you back up from the bottom, learning what your body can do and expanding your limits. That’s exactly the feeling Allen and Slaco aim to deliver to riders who once thought it was beyond their grasp.

I wanted to taste this for myself. And as much as I hated to admit it, I was in the same boat as those women that would come to Slaco years ago with their fears of being left behind by better riders. I’ve been mountain biking in Montana for the last decade, and I’m no slouch of a rider, let’s be clear. But when I relocated from western Montana’s flowy trails to Revelstoke, B.C., the technical riding here turned me into Bambi on wheels. I was suddenly the slowest and clumsiest biker in a 50-kilometer radius, and I hated that.

“I’d ask why they weren’t out there too, and I’d always get the same story: I don’t want to hold anyone back.”

I like riding with people of all genders, and mostly don’t even consider the gender factor in outdoor adventures. Still, this new but deep-rooted insecurity about not being “good enough” drew me towards the supportive environment offered through learning from and with other women. I still wanted to push myself hard. I wanted that mythical backcountry high.

I signed up for Sweet Skills’ first expansion from the South Chilcotin into my neck of the woods: Sol Mountain.

It’s a coveted destination of its own in the lore of B.C. mountain biking, known for its remoteness (the long, burly road to the lodge has earned legendary status for taking out many a pickup), the cold beers that the lodge staff leave chilling in Sol Lake for thirsty riders, and for the anticipated new alpine Caribou Pass trail stretching across the spine of the Monashees. 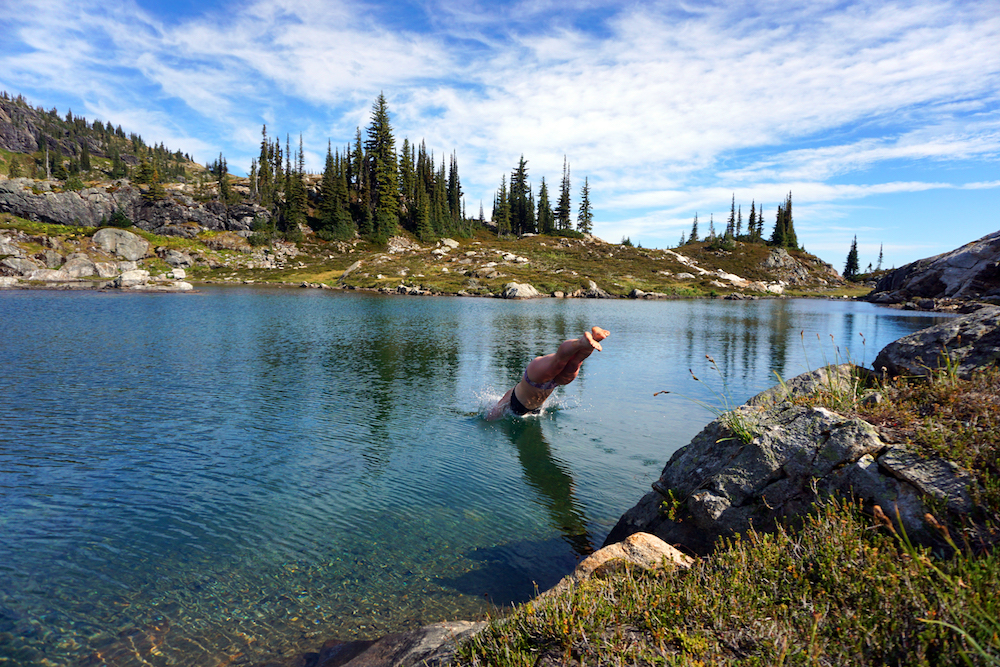 I was the only one from Revelstoke. The rest of the women hailed from Whistler, Squamish, and Pemberton. While the trails in my zone are known for being technical, they’re a cake walk compared to the biking in these places—and riders from those towns are known for being as badass as the trails. I immediately had that same damn thought: I won’t be able to keep up.

I shouldn’t have worried. Every one of those women, regardless of where they fell on the spectrum of technical skill, were there to learn from Slaco, Allen, and the other guides Tera Meade and Deb MacKillop—all of whom were some of the most impressive riders gracing the trails of western Canada. They expertly combined doling out tips & training with getting after it so that each day felt like an alpine riding adventure with the extra bonus of absorbing wisdom from skilled riders.

Sol is tucked deep in the Monashees, with views of glaciated peaks in every direction. Caribou Pass is a long rolling mix of ascent and descent, with some technical sections that definitely pushed my limits. It ends in a breathtaking vista like dropping off the end of the earth. The high on achieving our destination fueled us through the return pedal, and up to the next pass. 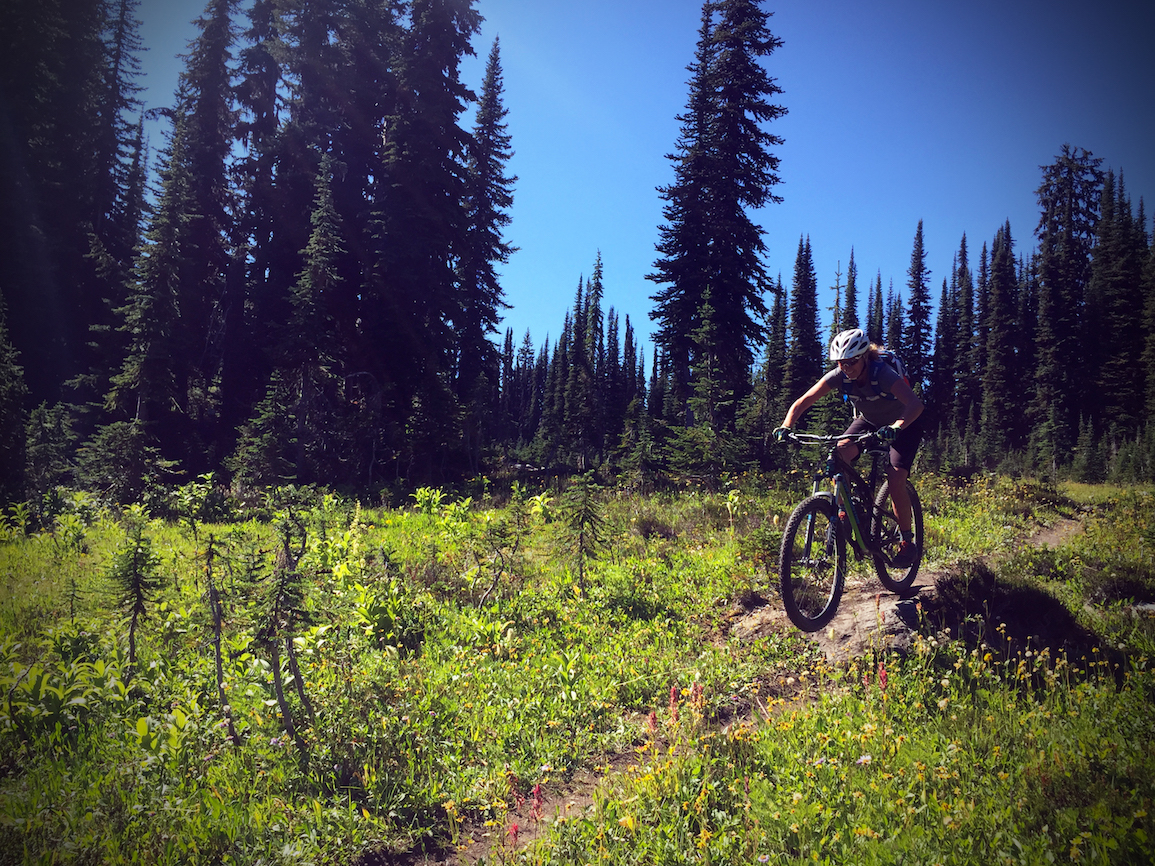 That evening we watched the sun set on the rocky faces of the Monashees with that deep contentment you only achieve from a tired body, a clear mind, and a proud sense of a mission accomplished—that feeling that’s crisper when it’s collective.

I know that I can, and will, go back and ride that trail—and many others—with anyone. I’m hooked on backcountry riding, thanks to the two women who brought it within my reach.