Preparing for Baja: In defense of the boring parts

On the Baja Divide (1,400 miles of dirt and sand down the Baja peninsula in Mexico), my crew was routinely teased by other riders for being so organized. Spreadsheets! Lists! Itineraries! But we love those parts. We love the skill building, the dry runs, the practice, the “boring” parts.

I didn’t just start out being organized and prepared; I’m on a whole learning journey. For instance, I’ve been learning about water for 10 years. For my first long-distance backpacking trip, I borrowed a water filter, practiced using it in my kitchen sink and successfully filtered some gnarly rusty pump water on the trail. A few years later, I used a friend’s SteriPEN on a backpacking trip where we had access to plentiful clear (non-particulate-laden) water. I eventually bought my own and used it on a springtime cross-Pennsylvania bike tour, which was also the first time I used a hydration pack.

On a winter backpacking trip, I waffled about what my best option would be for water treatment and chose the SteriPEN. I soon learned how quickly batteries die when it’s below freezing (very!), but we had the great luck of finding a potable water source only a couple of miles away; they’re usually shut off by that point in the season. Making mistakes is the human condition; the key is learning from those mistakes. OK, lessons learned and filed away for future winter reference: 1) Consider a pump filter, even though there is a chance the line might freeze, 2) there’s no reason not to carry water-treatment tablets, 3) keep batteries warm in an inner pocket and maybe also 4) who goes backpacking in winter?

On all of those trips, I learned how to assess the quantity of water I needed to carry, based on my understanding of the terrain, the availability and location of water and my own physical fitness. I also learned where and how to carry it comfortably. Last year, after a crying jag on a 100-degree day on a bike tour in Idaho, I learned that I can’t wear a hydration pack when it’s that hot; I hadn’t realized I was overheating, and I had a minor meltdown. That’s how we knew that we’d need to carry all of our water on the bike for Baja. I’ll probably always have a little anxiety about water security, but riding the Baja Divide was way more fun and way less stressful than it would have been if I’d needed to learn all these water lessons while negotiating the toughest terrain I’ve ever toured. The learning process around water management wasn’t boring for me, because I was out doing fun stuff the whole time.

In the world of adventure storytelling, the adventures are always escalating — bigger, badder, radder, more remote, more extreme, higher stakes — which can make it seem like tiny adventures don’t count. Small adventures are adventures in and of themselves, not just prep for the huge out-of-reach trips. Adventures are not the sole purview of the fit, educated, wealthy, gear-owning, airline- miles-having jet set; weekend warriors and broke folks get to have adventures too. A lot of people consider everything leading up to the ride to be the boring parts, but for me, the adventure (the work, the learning, the growing) starts long before I get on an airplane, long before my tires touch the ground. The skill building and prep is relevant and useful regardless of the scale of the adventure.

A great adventure story doesn’t have to involve high drama in extreme conditions. One of my favorite bike-camping stories happened within the city limits, when a large group of my fellow sleeping dirtballs and I were woken up in the middle of the night by a drunk local riding a lawn mower with the mowing deck removed (gotta make space for a cooler!). Initially he was angry with us for ruining the blind date he’d planned for his cousin by camping in “his” spot; he later harangued us to drink with him and eventually concluded with a tearful proclamation of his love for this patch of woods. 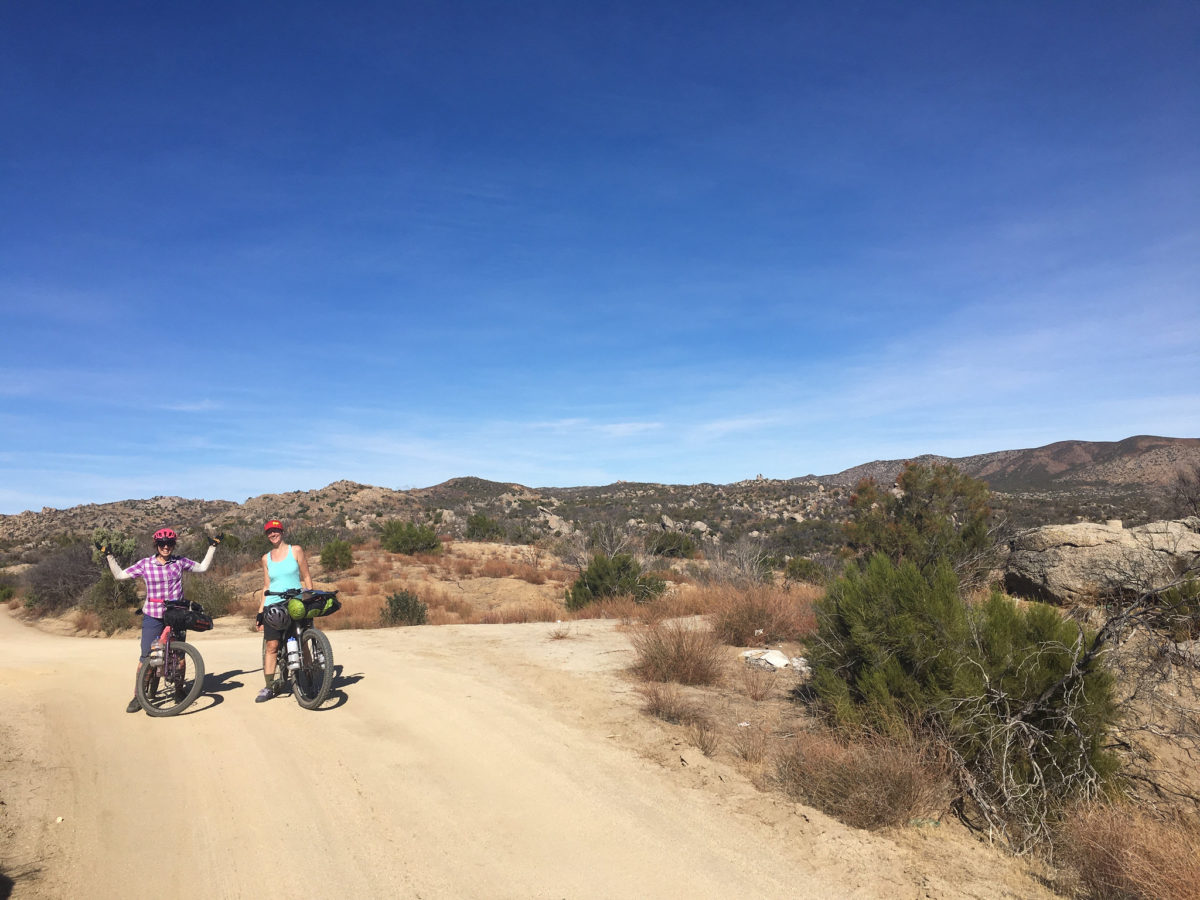 Humans are bad at learning when we’re stressed; we need to do it in safe environments. This is described in Maslow’s hierarchy of needs: Our most basic requirements (food, clothing, shelter) have to be met before we can even begin to think about sociocultural, emotional, spiritual or intellectual pursuits. We also see this in what’s called the affective filter in second-language acquisition: Emotional factors (like anxiety and self-consciousness) can interfere with the ability to receive and process new information. In Baja, I got to do things like learn the names of cactus varieties and talk with locals about how they harvest and use cirio trees and cardón as building materials. I could focus on those things because I wasn’t freaking out about how to carry my water.

I read so many adventure stories about people pushing themselves to find their limits. While I love reading them, and I love discovering new depths of my own abilities, there is an often-unexamined subtext of people of means going underprepared into a high-stakes situation and potentially consuming a lot of resources belonging to other people, often of lesser means. It’s the difference between experiencing voluntary generosity (someone offering me water because it’s a hot day) and imposing a moral imperative on another person (I didn’t read the map, overestimated my ability and didn’t bring enough water on a hot day, and now the person who found me feels obligated to give me their own water so I don’t die). It’s the difference between the old saying “hope for the best, prepare for the worst” and assuming that everything will work out, and if it doesn’t, taking advantage of the willingness of humans to help.

I’ve certainly nosed up against that line along the way. On a first backpacking trip with a new hiking partner in a zone with specific, designated camping areas, I grossly overestimated our pace when setting our itinerary. We wound up hiking miles after dark and crossing ice-covered streams in an area full of ankle- breaker rocks. I will be forever grateful that we did not get injured or frostbitten or have to leave the trail in hopes of finding a stranger’s door to knock on to call for emergency services. You never forget the near-misses, and they can really help us learn to be aware of our privileges, of the context into which we are inserting ourselves, of what we might be taking from others.

When I’m adventuring, I’m not thinking about how this will help me “level up” for future adventuring; I’m thinking about how to incorporate the skills and lessons and experience I’ve built so far. That’s how I became a Spanish speaker in time to ride the Baja Divide. I left my job at the end of 2016, stalled out and missing learning new things. I reached out to a handful of adventure pals, figuring some travel might kickstart my education. One friend wrote back saying, “I’m interested in traveling around in Central America. I’m considering taking some Spanish classes for a week or so at this school in Guatemala. Is that interesting to you?” YES! I didn’t know that’s what I wanted until it was suggested to me. A more structured educational setting would be a great way to focus when my world was suddenly one expansive overwhelming possibility. I immediately contacted the school and got a plane ticket and was on my way, alone, to live in a Spanish-speaking household, take classes during the day and do homework every night.

A few years earlier, my partner and I rode the length of the Spanish Pyrenees, which was my first visit to a place where the languages were not my first language. We studied Spanish before we went, but that takes you only so far when you’re riding through Euskara- and Catalan-speaking communities. We spent the next few years learning a lot about the history of the region and Spain, the Basque and Catalan struggles for sovereignty and how much more complex it all is than we’d ever imagined.

That experience was a big bright light shining on how I live my life and what is meaningful to me; it became deeply important to understand how travel can be another way that imperialism plays out, to prioritize learning about the power dynamics of travel and to never just roll into a place and see what it’s all about without doing my homework. Even so, I didn’t know a goddamn thing about U.S.-Guatemala political relations when I headed there. I was mainly focused on making sure I knew how to get where I was going with limited language skills. I struggled to figure out how to call my ride once I got to the bus station in town, and a young woman asked me, in English, if I needed help. Until that moment, learning Spanish seemed like a vaguely good thing to do, a way to be a “global citizen.” But in that moment, the vagueness distilled sharply, and it suddenly became fundamental and essential for me to learn Spanish and be able to pay that kindness forward. I want to be able to help a newly arrived Spanish-speaker find their way in my city.

I learned a lot of Spanish and a lot of Mayan and Guatemalan history and culture while I was there, and I read a half-dozen books about the political history and context once I got home. I was shocked by how little I had known, and how devastating the history is. I felt like there was no reason any person in Guatemala would have welcomed me, and yet the kindness and generosity I experienced there moved me to tears. I’d wanted to learn Spanish as one step toward being less of the Ugly American, but oppression is multidimensional; in Guatemala, Spanish is the official language, but it is also the language of the colonizer. It isn’t necessary to travel internationally to learn a language — there are tons of resources, starting with local public libraries — but it was a critical experience for me in starting to learn about my place in the world and the land I walk and ride on.

Fast-forward to the spring: I’m back home from Guatemala, head newly rattling full of intermediate Spanish and cultural power dynamics, thinking hard about the Next Big Adventure. Where could we go in the winter? Baja it is! Because we’d already done so much learning and smaller adventuring, we had the baseline skills we needed, which meant I could focus my usual preparation efforts on language skills. I studied with a teacher right up until the week before we flew to our start in San Diego.

Learning the language made our interactions less transactional and more relaxed. It was so much more possible to connect with people in a genuine, natural, friendly way, because I was able to be my whole self, just in another language. Having homework twice a week for half a year was totally worth it! Vale la pena, sin duda.

This article was originally published in Dirt Rag 204, out on newsstands now! Go grab your copy to learn more about bikepacking and more!