The Convergence of Art and Mountain Biking: Kristina Wayte of Sketchy Trails

The other day, while I burnt minutes trying to decide what to eat for lunch, I was scrolling through my Instagram feed and something new caught my eye: pen and ink, perhaps some watercolors. I stopped and scrolled back to see this interpretation of a mountain biker lofting through the air. I was instantly taken back to the comics I used to love and read, but now instead of tragic tales of solipsism, it was the beauty of mountains and cycling.

Sketchy Trails is a series of illustrations and paintings created by Kristina Wayte. Her work, inspired by the mountains and her love of cycling, is something that catches the pulse of action sports. Part documentation, part fantasy, these illustrations have me looking for my helmet and shoes and heading down the trail in search of the same kind of magic. We were able to track Kristina down and have a quick chat about her background and her work, and we are very excited to share some of her art with you.

I grew up in southern California then moved to San Jose to pursue a degree in Animation/Illustration. From there I moved to San Francisco to work at a studio called Kabam. Almost four years later I left that job and made my way north to Seattle, WA. It was terrifying moving without a job. I had no idea what would happen but I knew I wanted to live in the PNW. 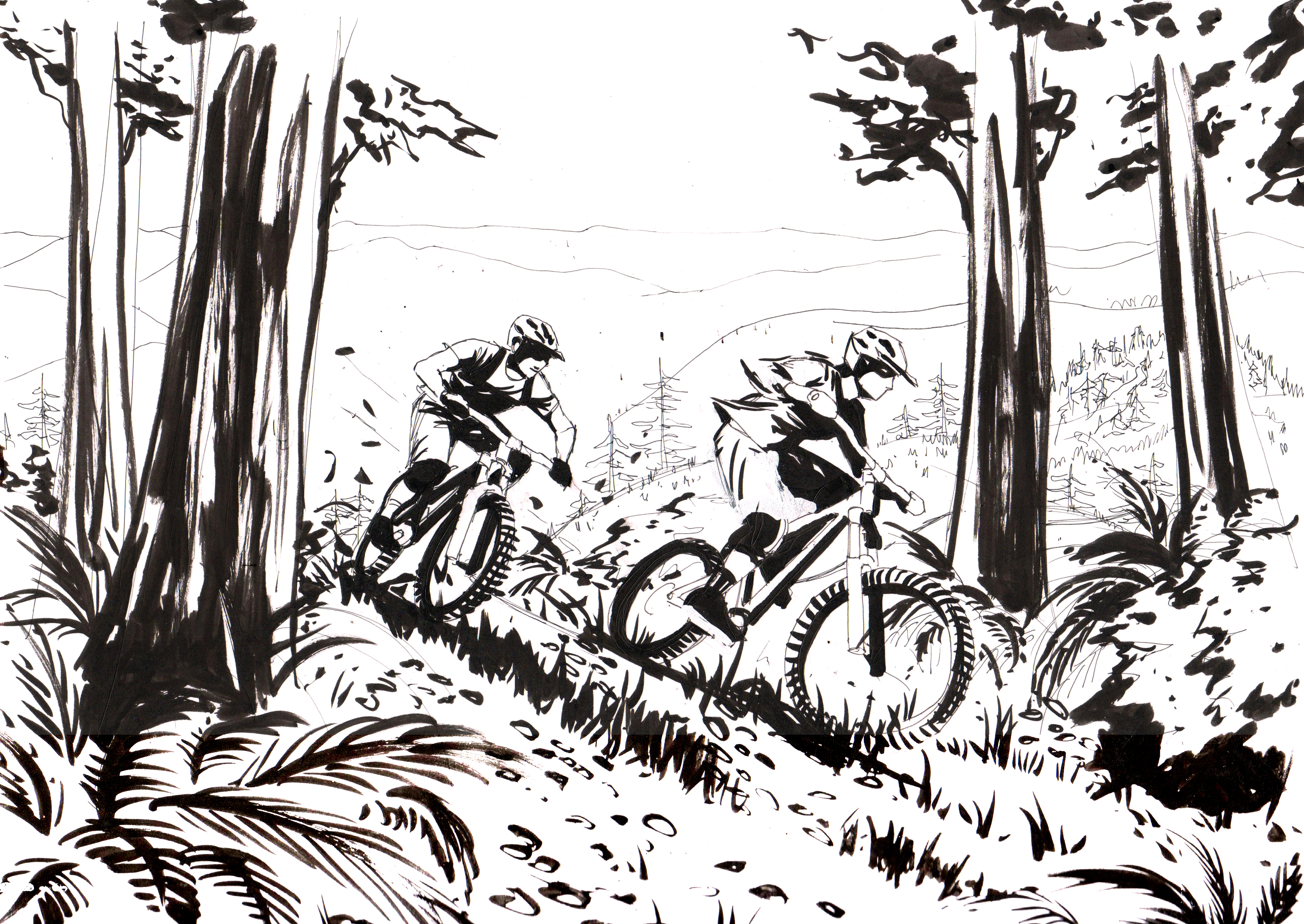 How has living in the Pacific Northwest influenced your work over recent years?

This area feels more open and I spend way more time outdoors. I enjoy studying the forests and clouds and drastic changes in weather. The air feels different and I really love the wind. This has directly translated into my work, I now draw more organically and focus on capturing movement. My previous work was more rigid and now it is pretty sketchy. In a good way.

When did you realize that you had this talent and that art was something you wanted to pursue beyond a hobby?

It was in high school when my art instructor recommended that I show my artwork at the Art University Portfolio Day. Based on the work I showed, they all recommended “Illustration.” I had no idea what that meant, but I did some research and decided I wanted to be a children’s book illustrator. That didn’t happen (yet?), but it set me on this track.

How long have you been mountain biking?

Since 2012. I bought a Marin hardtail after my twin sister pressured me for years to buy a bike. I was primarily an XC rider in California and was terrified of a one-foot drop. It was not until I moved here that I began to love downhill riding and, thanks to Duthie Hill, I love drops now.

The ideas and work done within the Sketchy Trails project, was that an immediate response when you started riding?

Sketchy Trails didn’t start until 2016 when my twin visited me after a summer in Whistler. I was still riding my XC hardtail and I remember watching her ride Predator at Tiger Mountain. I was shocked; she had gotten so good. I keep a sketch journal and that day I wanted to draw that moment. The drawing felt right and got a lot of positive feedback. So I kept drawing bikes and haven’t stopped. 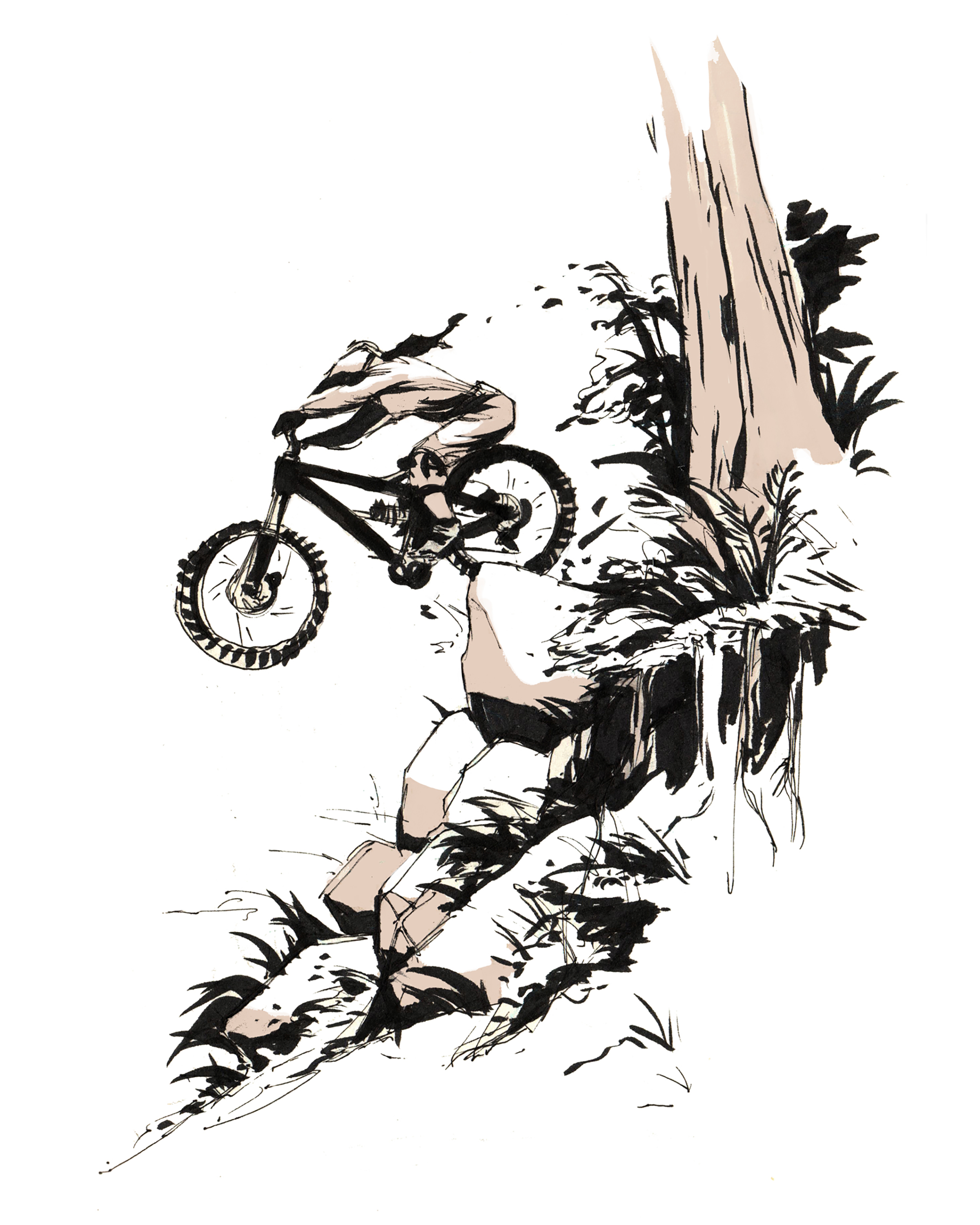 Besides your work influenced by your time outdoors in the mountains, you do a lot of sci-fi and fantasy work. Is that your bread and butter?

It used to be my bread and butter and I do miss that style. The fantasy work was challenging (in a good and bad way) but Sketchy Trails feels easy, I feel like I can go in many different directions with it. I am fortunate that Sketchy Trails is now my bread and butter and I have some big goals. I will still do some work in the fantasy genre; variety keeps things fresh. 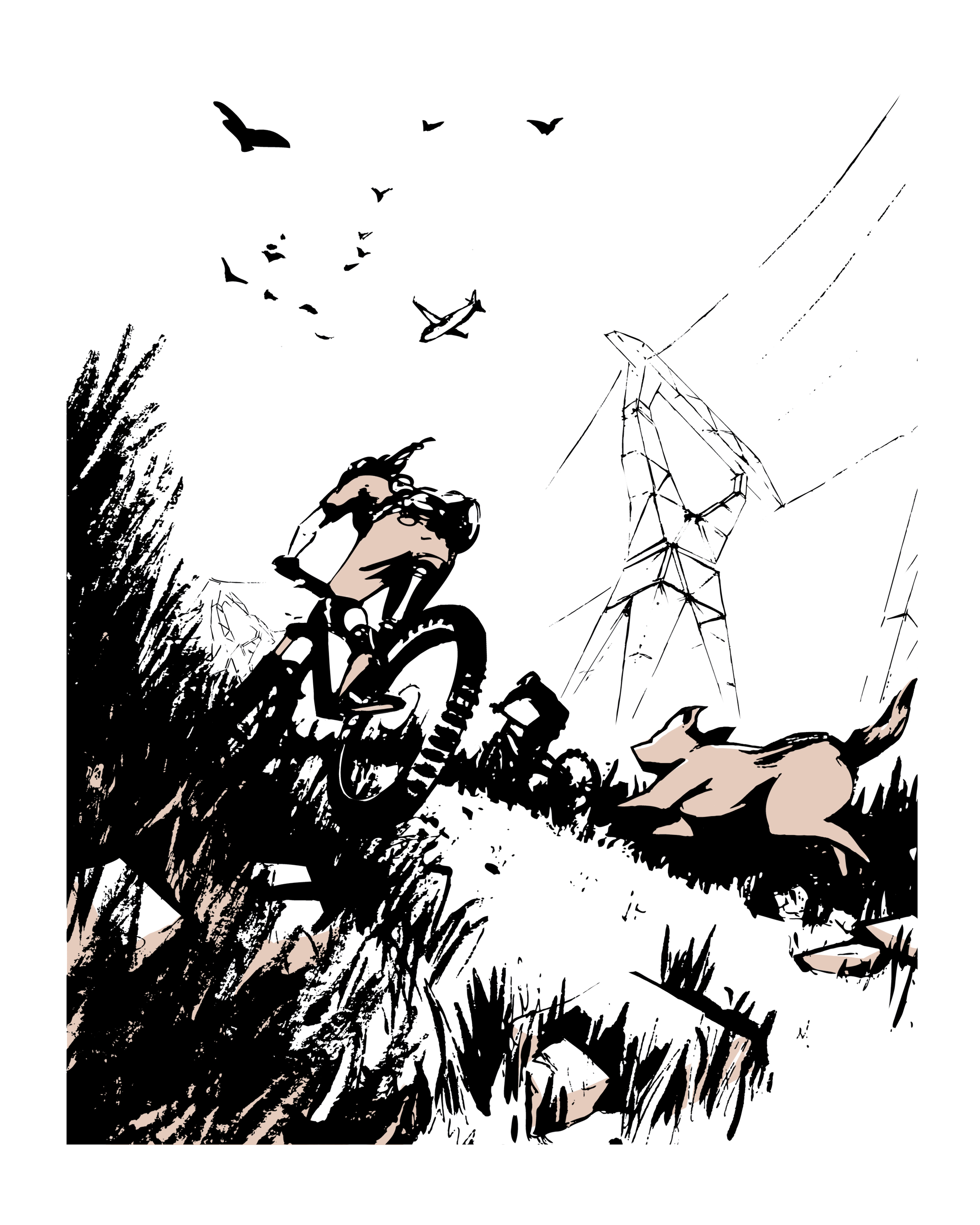 Do you have a dream client you would like to work for?

I really want to design artwork for Vans shoes, I love their artist series. If FiveTen goes that direction, count me in as well. I painted on shoes in high school and it would be fun to do it “legit.”

Is there any artist that you look up to? Any you would consider a big influence?

So many! I am inspired by artists in so many different genres and it changes all the time. Kim Jung Gi has been a huge inspiration recently. His pen work is amazing and there is so much detail and energy. For my comic, I was hugely inspired by Saga. A lot of people compare my work to Bill Watterson, the creator of Calvin and Hobbes. I read newspaper comics every day growing up, so it must be embedded in my brain. I will rattle off a few other artists as well: Aryz, Ian Ross, Yayoi Kusama, Katsushika Hokusai, Franklin Booth, Kenneth Rocafort, Adam Haynes. 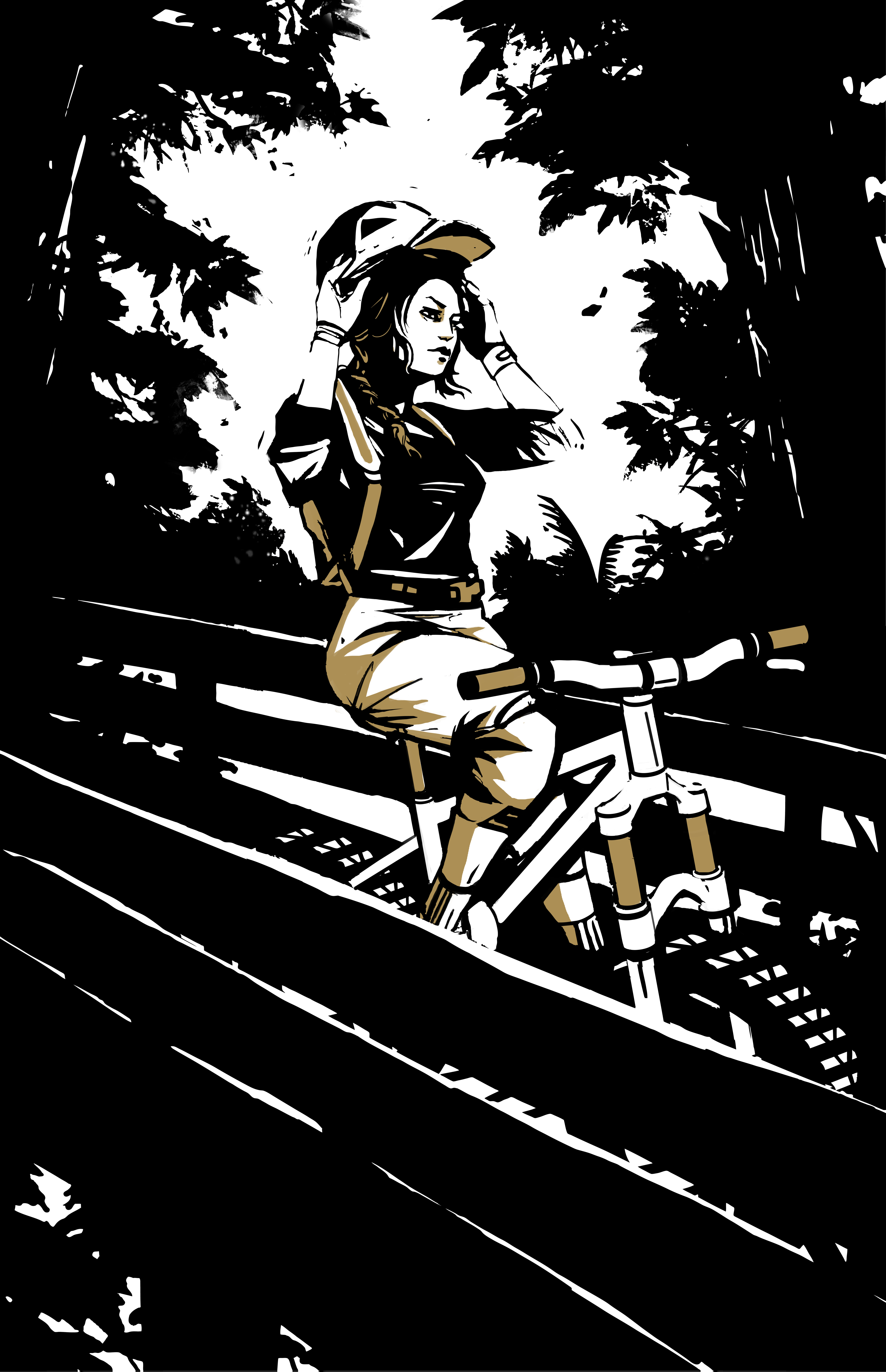 The work you’re doing on Sketchy Trails has a very action comic book feel to it; have you considered doing any full-length books or stories?

If I was presented with the opportunity, I would jump at it! I didn’t consider doing one for myself until the comic I recently created. I finally realized I do have stories to tell. I am thinking of starting a weekly comic called “Trail Series.” I don’t want it to be completely about bikes, but it will be the main theme. It is a thought in process.

Before we go, where can people find your work?

The bulk of my work is on my Instagram @sketchytrails and my portfolio selection is at www.sketchytrails.com 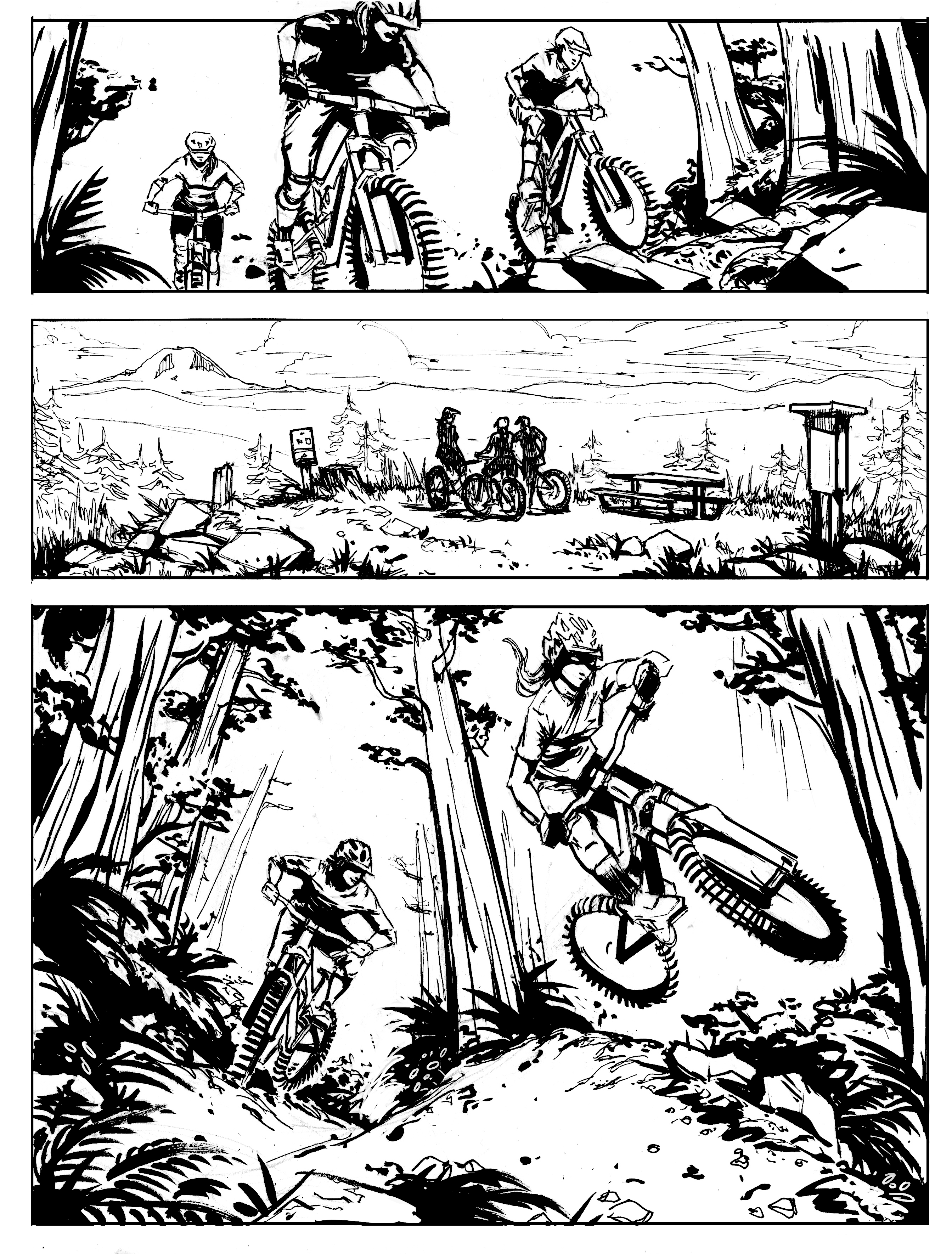 Are you or do you know of any other cycling artists? We’d love to hear from you! Shoot us an email at [email protected]