My husband and I, and our friend Ryan, marinated on this thought as we left in the pre-dawn cold to drive an hour and a half southeast, towards unexplored (by us) territory. We sipped coffee as the sun peeked over the horizon and then quickly burned through the morning fog, blinding us with its sudden intensity.

After turning off the highway, we were met with a series of back roads, which narrowed as we motored closer to our destination, a camp on the outskirts of Tuscarora State Forest in rural Perry County, Pennsylvania.

At the end of one of the steepest driveways I’ve ever driven, we were met with a group of friendly faces, some familiar and many not, our adventure cohorts for the day. The leaders of the gang were in the midst of arranging the shuttle for the day – we’d get dropped off and then make our way back towards camp for a total of about 25 miles over rugged terrain.

But not before a stop at an Amish bakery to partake in the best donuts I’ve ever tasted in my life (and stash some away for mid-ride).

Sugar highs engaged, we continued our journey to the top of a mountain, where our drivers dumped us off and we mounted our bikes for our first taste of Tuscarora.

Not ten minutes into the ride, we encountered our first “toast stop.” The idea behind this ride, which is an annual occurrence within the group of locals we were with, is to take breaks along the way at different cemeteries and grave sites to toast the dead as a celebration of Halloween. The day before the ride, Ray, the organizer, stashes coolers of beer and bottles of whiskey at different spots throughout the ride. Twenty-five miles, five toasts.

Back on the bikes, we descended an old tram road that was littered with sticks and plenty of leaf-covered rocks, one of which resulted in the group’s first and only mechanical of the day. While a small crew fixed the flat, the rest of us waited at a vista, basking in the sunshine and impending warmth after a chilly morning.

Rolling again, we wound through the valley and jumped on the Iron Horse Trail, which we’d been jokingly told is a “rail trail.” As soon as I saw it, I knew why all the guys laughed as this description. When most people think “rail trail,” they think of a relatively smooth, wide path, perfect for hybrid bikes and strollers. Anyone who showed up with a hybrid and a stroller to the Iron Horse would be sorely disappointed.

It does indeed follow an old rail bed, but one of a railroad that never got built. The trail is unimproved singletrack, and most of the time follows the spoil piles of material that were created while digging the future rail line, winding up and down these tiny ridges, following micro-spines, dipping into miniature valleys.

And so the day went on. Rocky, little-used trail was occasionally broken up by gravel and back road connectors. We pedaled along streams and across ridgetops. We crossed the infamous Sunoco Mariner East pipeline that is currently under construction on multiple occasions, the workers giving us funny looks but letting us pass without incident. We stopped to toast the dead and celebrate life with each others company on this perfect October day in the woods.

The last beer stop lasted a little longer than the others. We stood at Dead Man’s Curve and basked in the late afternoon sun. A giant truck rolled by on the narrow road and we all scattered, frantically moving our precious bikes out of the path of the big rig. Second beers were cracked open. Eventually, we saddled up and rode the gradual climb before regrouping for the final descent. 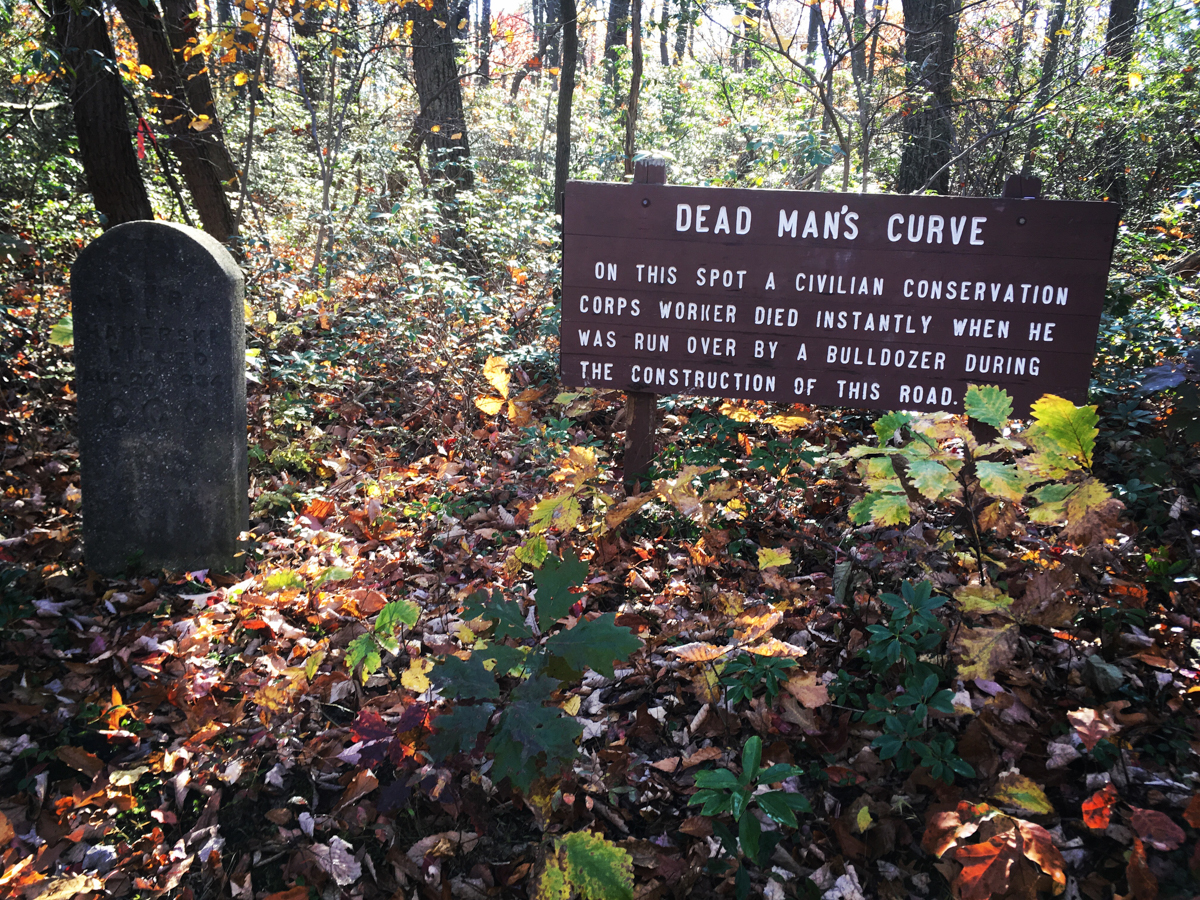 The official name of the trail was Julie Neidig Trail, but Ray called it “The Rabbit Hole.” As we started down the trail, we could see it drop off steeply down the side of the mountain. One minute we were on top of the ridge, the next we were hurtling down towards the valley below, ferns lining our way. Rich, the guy in front of me, kicked up a rock and I watched it bounce its way down the trail in front of my tire. I chased it for a while before it finally veered off the path and stopped.

By the time we reached the bottom of the mountain, I could smell my brakes. We all reconvened for the final bit of shenanigans for the day – a relatively large stream crossing. Most of our group attempted to ride across, but few made it. At least it was the end of the ride, as our feet were all now soaked.

We finished in Pandemonium, the name of a now-nonexistent town or estate that was the namesake for a cemetery that was the site of our final toast and stopping point for the day. 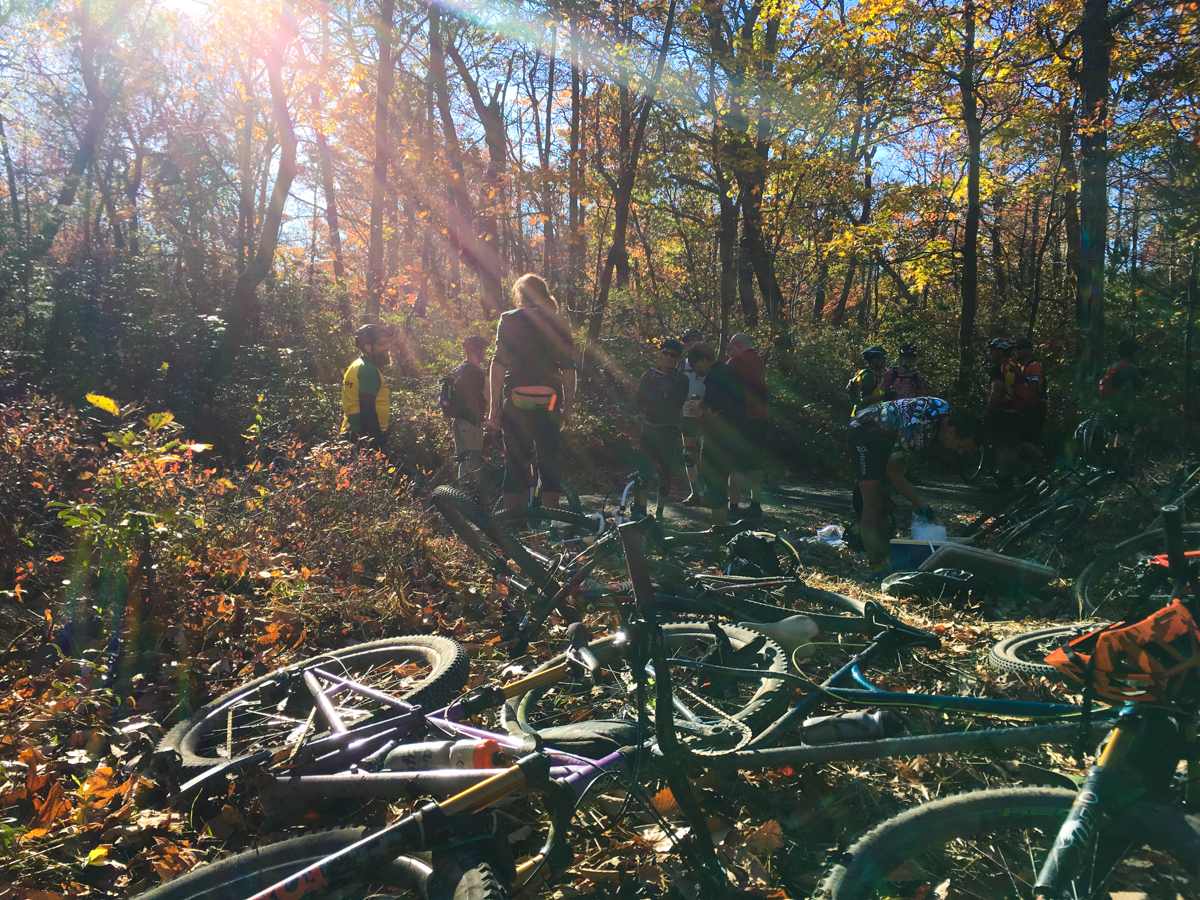