Ed. Note: Mountain Bike Trailer Park is a regular column written by Uncle Dan that appears monthly on the Dirt Rag Interwebs. If you missed his previous columns, check them out here.

“My focus today is like a bird dog in a field of ducks!”

I got this text from Joe on Thursday morning. On Friday, we were heading to the Lumberjack 100, and he was having trouble focusing at work.

I was in the same boat. Like Joe, I was mentally running duck-to-duck. How long was the drive? Could we pre-ride the course? What should I pack? What is the course like? When will the climbs hit? Will it rain?

Plus, hydrating for the race meant I was up from my desk to pee every half hour or so. And, it was already carb-loading time, so I was in a carb-drunk stupor.

It’s hard to get work done on days like that. 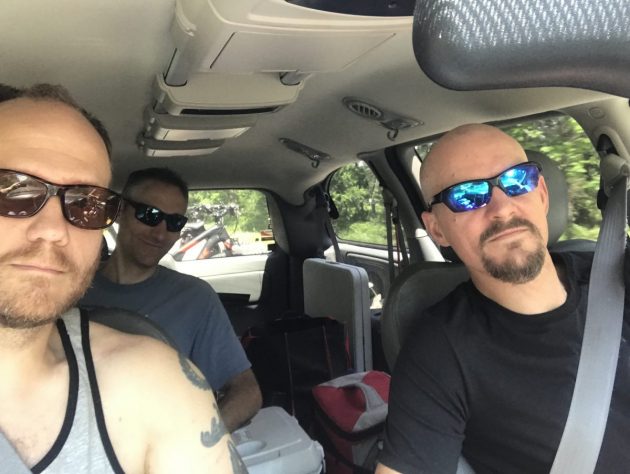 Dave, Joe, and I got up early on Friday for the six and a half hour drive. The ride down was filled with chatter about the race, our preparations and strategy. Ducks everywhere. And lots of pee breaks. We’re lucky we didn’t run off the road.

We had originally planned on camping at the race, but I had a last minute change of heart. It already takes a ton of packing and planning just for the race itself, and I didn’t want to add the whole tent/cooking/sleeping packing that goes with camping. Plus, setting up or breaking down in rain sucks. Plus, I like air conditioning. Ducks!

So I found a cheap place on AirB&B that would suit our needs.

It was somewhat “under construction,” but for 50 bucks a night, it was well worth it. And the decor was really something special. 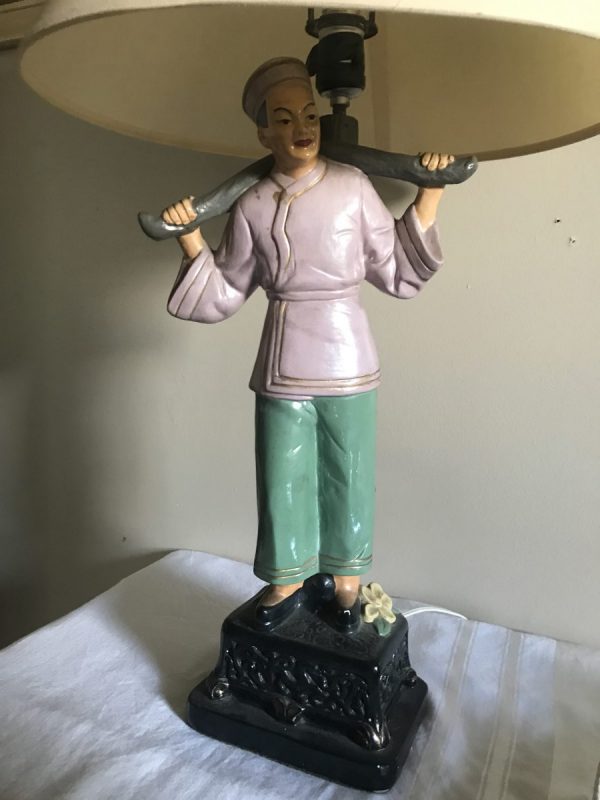 After registering and a short pre-ride of the part of the race course, we headed to a local bar for food and beers. Then off to an early bedtime. 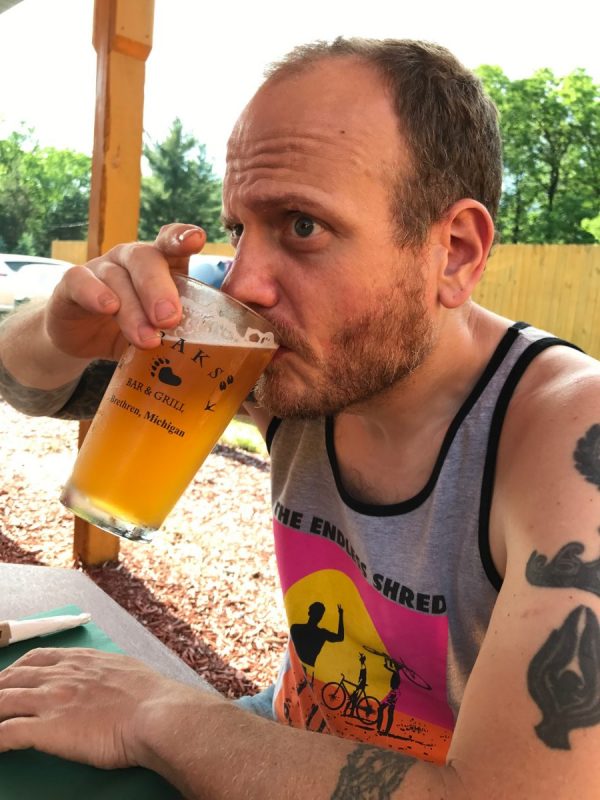 The Lumberjack 100 is part of the NUE series, which I am racing (poorly) this year. It was to be my second of four NUE races this season. The NUE series has so many good races, that it’s hard to pick off the menu (I’ll have the duck). This year, I chose the Cohutta 100, Lumberjack 100, Tatonka 100, and, for my fourth Epic, I will go to either Costa Rica for the Volcano 100 or back to Virginia for the Shenandoah 100.

It was my third 100-mile MTB race ever and my goal was simply to not crack (quack). In both of my previous 100-milers, I cracked hard.

Cracking in a long race is the worst. Mentally, you’re on the verge of tears, if not actually crying (I’m a cryer). You hate life, you hate cycling, you hate yourself for entering the race. Each pedal stroke is a pitiful effort. You swear you will never do a race like this again.

But I learned from it, and made some changes. At Cohutta 100, the crack happened at mile 80. Better, but still not good. I was determined not to crack this time.

I had done my research. The crack–or “bonk”–is brought on by depletion of available fuel for the body.

Without going into boring detail, it’s probably enough to say that you can only store and process a finite amount of carbs, and when that amount is used up, you will crack.

As race effort increases, carbs become a bigger proportion of your body’s fuel (the other fuel being fat). So, order to not crack, I would either need to keep my effort low, in a range that would allow me to burn fewer carbs per hour.

But, less effort means less speed. How would this affect my finish? I didn’t know, but was going to try.

The Lumberjack 100 is considered one of the “easier” 100-milers, if there is such a thing. At about 6,000-7,000 feet, the Lumberjack has less elevation gain than many other 100-milers in the series, which typically range from 9,000 to 12,000 feet. And, the Michigan singletrack is not very technical. In fact, I rode the whole race with my suspension locked out.

However, the Lumberjack is deceptively challenging for a couple of reasons. First, while most 100-mile races have plenty of road and gravel roads mixed in with the singletrack, the Lumberjack is nearly 100% singletrack (three loops of a 33-mile course). And, it’s challenging because there is little time for recovery. You have to pedal virtually the whole time. If you’re really racing it, its fast.

For me, this presented a challenge. I was itching to to ride the trail at my normal cross-country pace. But that would burn too many matches too fast.

So, I had to travel at “cruising speed.” It was tough to let people pass me early on, and to not chase down riders in front of me. But I forced myself to do so. I held my pace.

I still cramped some and suffered, but with five miles to go, I was happy and had enough in the tank to push a little harder to the finish.

I rolled through the finish line smiling and happy. I had done it–no crash, no bonk. How did I fare overall? Well, the winners had time to shower, eat, and watch the new Wonder Woman movie before I came in. But still, I finished a little higher in the standings than my previous attempts (I was about 2/3 of the way down the list of finishers) and no crack. So, I’d say pretty good. 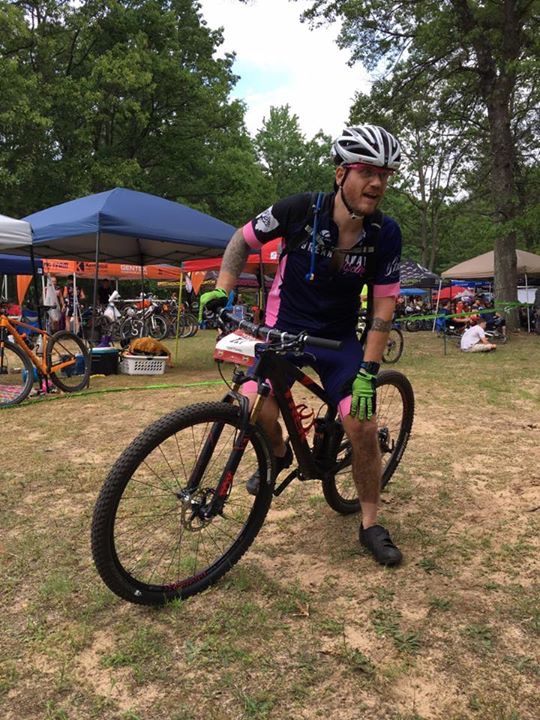 Still, as soon as I unclipped from the pedals, both legs locked up with cramps. That will have to be my next duck to chase. Joe says I probably shouldn’t drink a six-pack the night before a race. But I know that he’s just talking crazy. Never blame beer.

Ohio shows up strong at the NUE events. Ten of us shared a team tent, even though we came from different teams around the state.

After the race, we all met up for pizza and wings and swapped stories and drank beers.

This may be what I enjoy the most about mountain biking–the community. We get to know the people we race against and, more often than not, friendships form. Although we compete during the race, afterwards, there’s generally a lot of laughing and back-slapping. And these endurance races attract a really friendly crowd.

Next up–the Tatonka 100. Now, if you’ll excuse me, I have some ducks to chase.

Be brave and chase some ducks.