Words and photos by Rob Korotky

It’s Oct. 21, 2016, and a beautiful autumn morning in Marin County, California. A group of 12 guys with their bikes mill around under a canopy of trees at the end of a dirt fire road in the hills above Fairfax. A few minutes ago, the last rider skidded to a stop, kicking up a shower of dead leaves and causing a flurry of cheers from other riders already at the bottom. Amidst the post-ride banter and cell-phone pictures of smoking drum-brake hubs, Charlie Kelly strolls over to Joe Breeze and tugs on his shirt sleeve.

“Hey, Joe, isn’t it amazing how everything comes flooding right back?” His voice grows thicker with nostalgia and enthusiasm as he goes on: “I never ride here in the morning anymore, but man … the angle of the light, the leaves falling, the autumn air … it just feels like those early rides!”

Breeze glances around and, with a grin, replies, “Yeah, the light filtering through the trees and the shadows on the trail while I was riding down … exactly like race day.”

For a brief moment, these two mountain bike legends were transported back to their youth. And I felt over the moon to have witnessed it.

Only an hour earlier, the 12 had begun assembling at the summit of Cascade Fire Road, better known in mountain bike lore as “Repack.” Several came dressed in retro gear: jeans, denim or flannel shirts and old biking gloves. Kelly took it a step further by also sporting a pair of skateboard kneepads he wore in several races. All of it to commemorate a day exactly 40 years earlier when history was made.

Flashback to 1976, when a group of six showed up on the same day, at the same location, for the very first Klunker Downhill. The goal was to prove once and for all who was fastest down a trail considered to be the traditional descent back into Fairfax. The winner that day was Alan Bonds, and it could have ended right there if not for the fact that a lot of people had crashed, other riders had missed the event and the losers really wanted a rematch. So it wasn’t long before another Repack race was organized. Then another and another, until it became a recurring event. 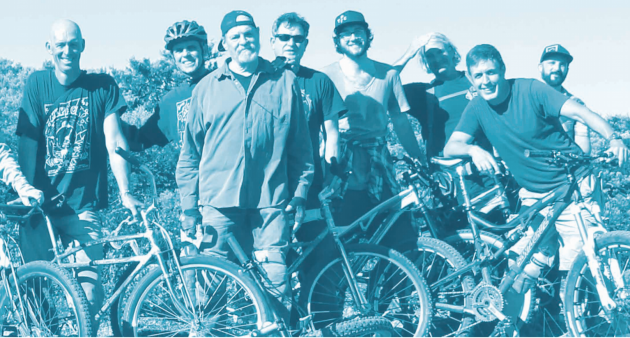 During those days, Repack races were the crucible of technical development, as bikes were ridden to their utmost limits. Each race brought new ideas in areas of durability, performance and riding tactics. They also attracted an increasing number of riders from around the Bay Area, further spreading the idea that off-road riding and racing might be something cool to do. Many years after the final race was held, Repack would be recognized as the event, the trail and the moment in time that marked the birth of mountain biking.

Of the handful of old Repack racers who showed up on this bright October morning, some names are still easily recognizable: Breeze, Otis Guy, Marc Vendetti and, of course, Kelly, who organized and promoted the original Repack races. And then there were guys like me, diehard enthusiasts of one kind or another who made the pilgrimage because we’re enamored with this sport and its humble beginnings. Some rode newer equipment, like Kelly on his 2014 Breezer Repack, but most were on singlespeed old iron with drum brakes — true vintage Marin Klunkers that have spent the last 30 to 40 years stored in a shed, only to be brought out on special occasions like this.

The gathering at the summit involved a lot of pointing at components and rusty steel frames, laughing at coaster brakes or motocross-style handlebars. It was pure nostalgia, but also a time to reminisce and joke about the early days. How young they were then and how bald they are now. How the new equipment is so much better. How they sure as shit weren’t going to “rip it” today, but instead planned to “take their time” down the trail. At least that’s what Guy declared.

Back in the day, Repack races went off at 10 a.m. Not today — there were pictures to be taken and memories to be shared. Ten-thirty came and went before everyone finally agreed it was time to roll.

Without fanfare or pomp, riders mounted their bikes and squeezed in by the infamous starting rock. Then something funny happened. Since it wasn’t a race, but rather a casual ride, no one quite knew how to start. We all stood there for a moment until someone in the group asked, “So, um … who wants to go first?”

Most of us looked to Kelly, who, in turn, looked to his good friend of almost half a century and graciously proclaimed, “Joe, will you do the honor of leading us off?”

And with that, the group began down Repack to celebrate the 40th anniversary of the sport they love so very much — a sport that has played a huge part in each of their lives.