Tour of the White Mountains of Arizona

Words and photos by Brian Leddy

High in the pines of northeastern Arizona lie 200-plus miles of sweet singletrack. Traversing the rocky, volcanic slopes of the White Mountains, the trails flow through ponderosa pine forests and high mountain meadows. If you’re looking for a place to get away from it all, this is a great place to find yourself.

This is the Epic Rides Tour of the White Mountains, an event 21 years running. Epic Rides is known more for its big, fast and fun events like 24 Hours in the Old Pueblo, a huge celebration in the middle of the Sonoran desert, and Whiskey Off-Road, a banger in the middle of downtown Prescott, Arizona. The brand’s races in Grand Junction, Colorado, and Carson City, Nevada, also have gained notoriety thanks to large cash purses, huge crowds and a solid lineup of pro riders.

The vibe is completely different at Tour of the White Mountains. Traveling the high country of the Southwest in early October, you’ll see that fall is starting to settle in with the yellows, reds and oranges of the season beginning to make their appearance. Cool, crisp air and magnificent scenery also mean you might take a couple of extra moments to enjoy your surroundings. Sitting around a campfire, watching the sunset and sipping a cold beer amongst the tall pines makes the city feel like another planet. 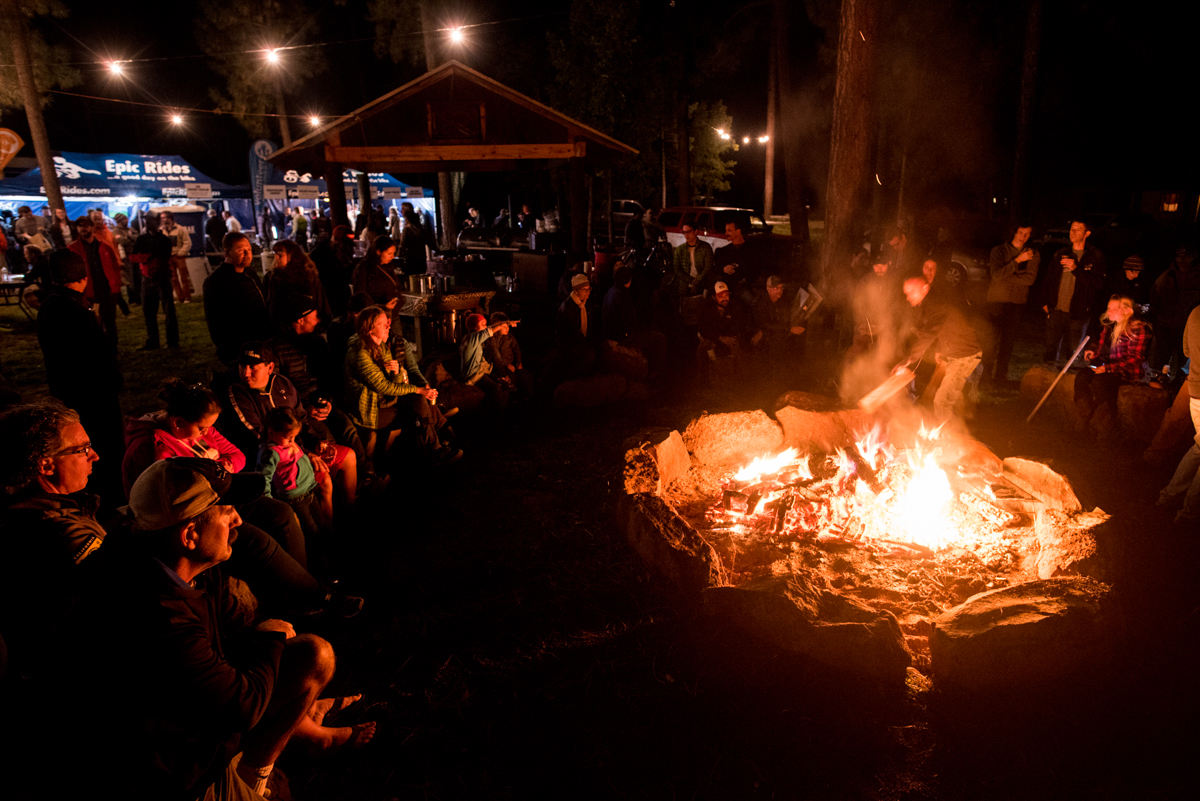 “There aren’t any pros [racers], and I think it relaxes the crowd a bit, gives the event even more of an inclusive, grassroots feel. It turns the focus to spending the day on your bike instead of nutrition and finish times,” singlespeeder Pat Murrish says.

“Free beer, live bluegrass and all of your favorite mountain bike friends,” adds Scott Bridges when asked about his favorite part of the weekend.

Another reason the event is so laid back is because it is one of the first races of the season. The intense Arizona heat of summer is starting to subside and that means many are just starting to find their legs for the upcoming year, making the race a great season-opener. 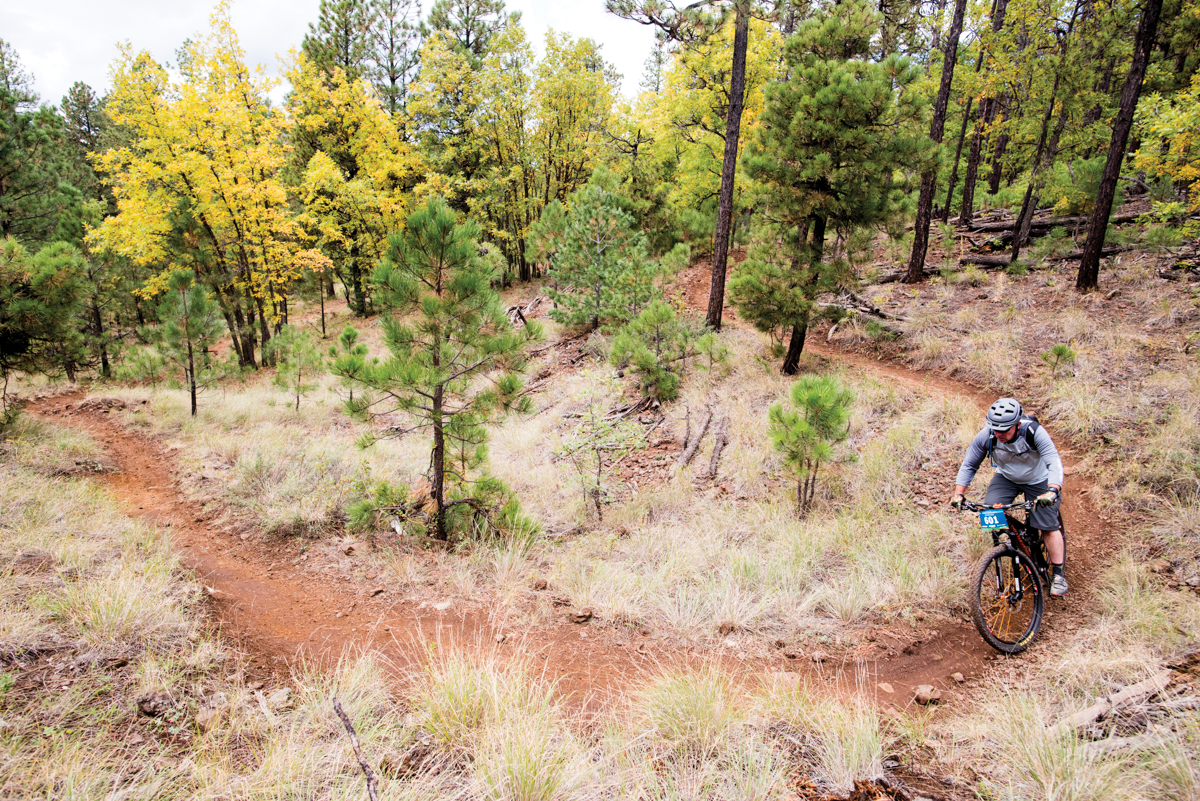 “In October, mountain bikers in Arizona are just beginning to wind it up for the season. The trail selection is very welcoming for all levels, and is sufferable for the person that’s just beginning to find their fitness for the winter riding season,” Epic Rides president Todd Sadow explains.

The vibe is chill, but don’t be fooled into thinking the trails are just as easy. With options for 9-, 35- and 50-mile loops, plus a 30-mile gravel grinder, the Tour has something for everyone. The trails themselves are phenomenal and the routes are 90 percent singletrack (with the exception of the gravel grinder).

Trails like Los Burros, an area classic, make up the heart of the ride, offering up chunky terrain and fantastic views as you traverse around Pierce and Wishbone mountains. The 50-milers continue on to Land of the Pioneers Trail, which eventually takes you near the summit of Lake Mountain. The grunt to the top has many racers walking their bikes, while the long, fast descent back to the finish has them breathing a sigh of relief.

For many, the highlight of the weekend comes after the racing is done. Racers are greeted upon their return to the staging area with live music and free beer, both welcome sights for weary riders. In 2016, Sierra Nevada tapped a keg of Narwhal, their specialty stout. The 10 percent ABV suds helped take the edge off of the pain.

“The event really benefits from being hosted on a family-operated ranch. Everything is so localized. Registration, camping, food vendors, live music — all within 100 feet of the start/finish line. You can literally roll through the finish chute and collapse in front of the beer tent,” Murrish says.

With cold beers in hand, racers gather at the staging area to take in the sights and sounds. In 2016, Old Pueblo Bluegrass picked their way through a couple of sets of foot-stomping music as families lounged on the grass and smoke from the BBQ wafted through the air. Children danced with their siblings, spinning in circles on the small wooden dance floor as adults recounted stories from a great day on the bike. 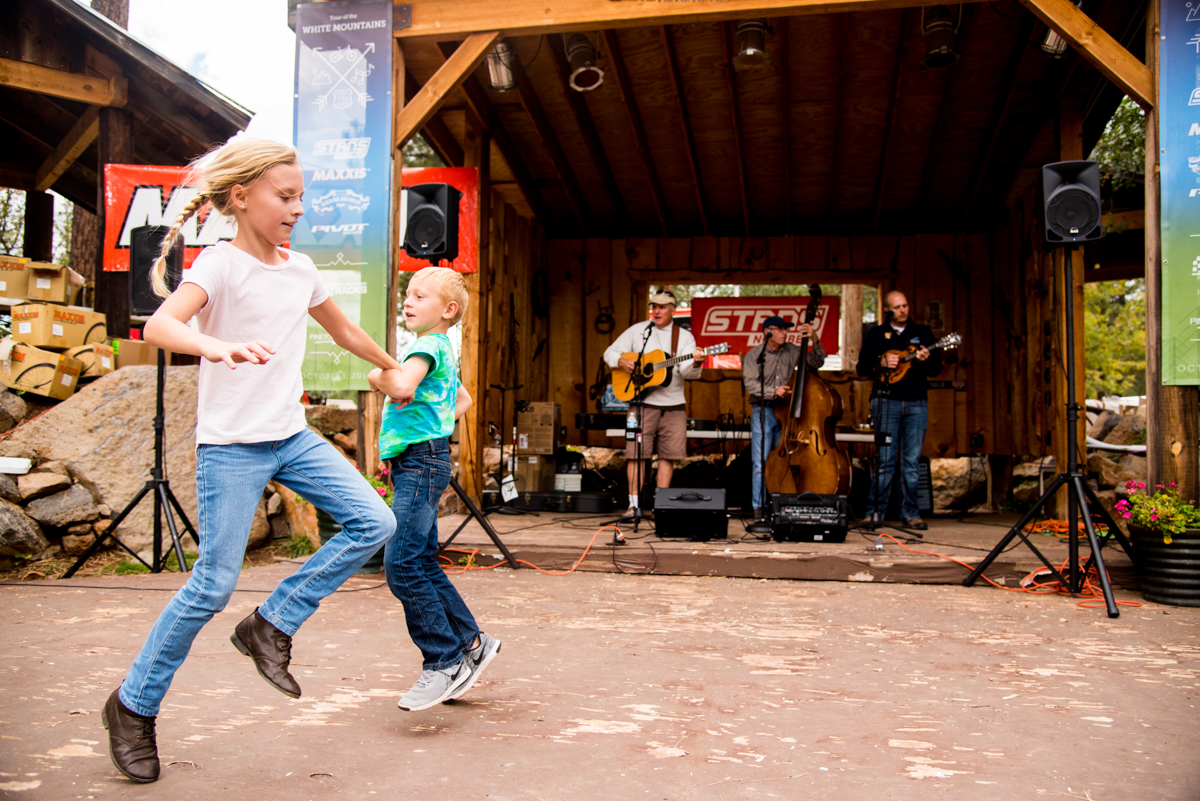 At the other end of the venue, the Epic Rides crew set up a log-pull competition. A clunky old singlespeed stood ready to pull a large hunk of telephone pole, a feat that turned out to be a lot harder than it looks. A few folks gave it a try with some success, but most people were too worn out to give it much effort.

As the day began to wind down and the music faded, the campfire became the gathering spot. Warming themselves around the flames, racers told stories from the trail. It wasn’t long before the night set in and many retired to their tents, looking forward to restful sleep under the stars. A good number stayed up late, reveling in the friendships formed over great times had on mountain bikes.

In the morning, the rising sun took the edge off the cool mountain air, making it a little easier to crawl out of your sleeping bag. The smell of pancakes and coffee drifting through the air helped as firemen from the local station served up piles of steaming flapjacks to weary-eyed souls in need of nourishment.

The 2017 Tour of the White Mountains will take place on October 7. Find out more here.

This article was originally published in Dirt Rag 196. Subscribe so that you never miss an issue and sign up for our weekly email newsletter to get fresh web content delivered to your inbox every Tuesday.