It was an amazing adventure to a historic land littered with scenic trails, long climbs and high-speed descents. A holy land that hosts one of the best three-day mountain bike stage races I’ve ever done. Yet it almost didn’t happen.

In early 2014, I received an invite to attend the Epic Israel. While some questioned my eagerness to make the trip, I was raring to go, as was my teammate. We had bags packed, bikes ready, passports in hand—all we needed was a flight confirmation. Then it happened. Due to some serious unrest in the Middle East at the time, all U.S. flights to Tel Aviv were suspended. Even though our host claimed we could still get there, concerns about safety made us decide at the last minute to pull the plug on the trip of a lifetime, much to the unspoken relief of our families and friends.

Halfway across the world that September, the race went off without a hitch, glitch or security issue. So early last year, when an email arrived from our host, Nimi Cohen, asking simply, “Care to try again?”, we didn’t hesitate; my teammate and I were going no matter what this time.

“Be prepared for political backlash no matter what you write [about Israel]. Even if you just say, ‘Man, I rode on the sweetest singletrack today,’ you will get angry responses,” Cohen mused in the middle of an amazing post-race ride through flowing, limestone-littered singletrack called Adolam-Kanim, which at one point stopped high on an overlook, with us on one side of the “separation fence” and Palestine less than a mile away.

It was a small insight into the complexity of this storied land, literally of Biblical proportions, that provided some of the best mountain biking I’ve done amid an unbelievably strong cycling culture. Cohen continued, “Cycling is what keeps us sane in this crazy but normal, normal but crazy place … and the more crazy it gets, the more we get into cycling.”

The Epic Israel mountain bike stage race is a three-day, two-person team event held about an hour and a half outside of Tel Aviv in kibbutz Dalia. It features top-notch accommodations, A-plus organization and a thriving atmosphere with nearly 500 dedicated racers toeing the line every morning at 6:30 a.m. on courses that measure up to 70 miles in length. The event is a memorial for Giora Tsachor, who died on a training ride during the early planning stages with his son Gal, who carried on with the mission to create a premier mountain bike stage race in Israel. 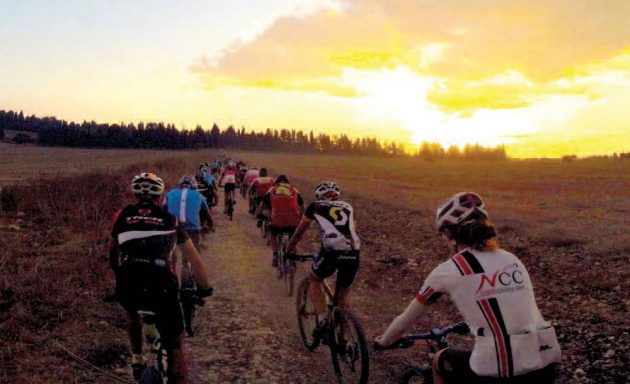 The loops ranged from smooth forest and rocky limestone singletrack to fast gravel roads and some amazing urban riding that never disappointed. The race also had some of the most interesting courses I’ve been on and was one of the more difficult, covering almost 200 miles with more than 15,000 feet of climbing in just three days. Racers are treated to a collage of rolling vistas with incredible views across scenic valleys in every direction and stunning sunrises greeting the early-morning start times. As we crested the initial long climb of the first stage deep in the woods, the thumping bass of techno from an all-night rave reverberated through the morning air. On the last day, as we exited the swoopy, technical singletrack of the Mishmar Haemek forest onto the last few miles of bike path that would lead to the finish—where event volunteers waited with bottled water, umbrellas to shield the sun and bowls of candy while we queued up to receive finisher medals and jerseys—it was clear that this was truly the trip of a lifetime.

After that Monday trail ride, which ended with food and beers at Srigim Brewery, famous for its award-winning IPA, I reflected on the trails I rode, the people I met. All the historical sites in Tel Aviv, toes in the Mediterranean Sea, rides through Old Jaffa and a tour of Jerusalem at the Wailing Wall and the Tomb of Jesus. I saw what I never believed I would get to see in this underrated mountain biking destination, and it was all because of the boundary-defying unification of riding a bike on the dirt.

If I open my inbox this year with another email from Cohen, I hope it will simply say, “Care to come back?”

For more on Israel’s trail network check out our online feature at dirtragmag.com/israel. (Note this article is reprinted from February 15, 2016 in Dirt Rag issue #189. Check epicisrael.org.il for updated information on the 2017 event.)