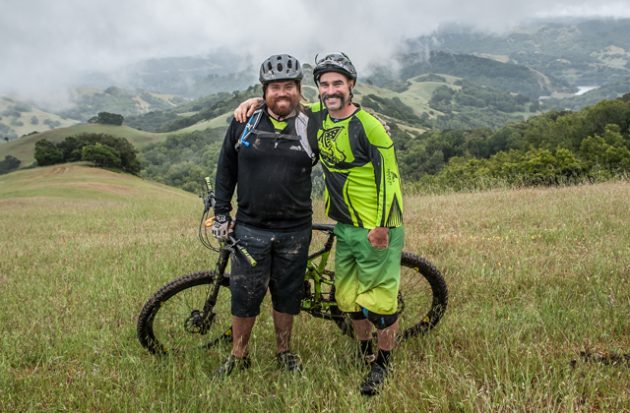 Semper Fidelis, meaning “always faithful.” This is the motto of the U.S. Marine Corps. To many, presence of the motto in our lives is likely limited to the stickers proudly and neatly displayed on the vehicles of our nation’s veterans. To a Marine, it’s a guiding principle and reminder to always remain faithful not only to the current mission at hand but to the entirety of the Marine Corps and country it protects. It’s a reminder that service isn’t limited to the months of a deployment or years of a tour but is instead a lifetime of service.

Ever witnessed a Marine mountain bike? This faithful, dedicated mindset makes them the hardest-charging riders on the mountain, doing so without limitations of fear or reserve.

Verbal thank-yous to the service members of our country is a great start, but a weekend experiencing the life and riding of Mark Weir—now that’s one that can’t be forgotten. We chatted with two attending service members, Daniel Riley and Jeremy Mendiaz, to get a firsthand account.

There’s certainly no singular path toward recovery. What purpose does mountain biking serve in your recovery?

Riley: Mountain biking gives me a freedom and independence that is hard to find in my day-to-day life. Life as a double amputee can be difficult, but when I’m on my bike, it’s an even playing field. I’m not disabled, I just have different equipment. And, that’s a deeply valuable perspective recovering from life-altering injuries.

Furthermore, biking allows me to be part of a community. It wasn’t just losing my legs, I lost a community. The brotherhood of the Marine Corps is an awesome thing, and I miss it. It has been hard to find a sense of community and family like that, but the social aspect of mountain biking helps give that back. There was a time I thought my life was over. Getting dirty, having fun, scaring yourself a little, and hanging out with new and old friends makes life worth living.

Mendiaz: I have always been an adventure seeker and used to trail run for exercise and enjoyment. When I was injured I was told that I would never be able to run again. So I found something better: bombing down a trail on a modern-day penny farthing. It’s much lower impact than running and produces a bigger stoke.

We witnessed you tackle obstacles that many avid riders would steer clear of. What motivates you to challenge yourself and go beyond the norm?

Riley: I like to say, “If you’re not falling, you’re not trying hard enough.” I’ve found that pushing and challenging myself to step outside of what’s comfortable just makes me better, whether it’s on the bike or anything else in life. For me, if I’m not pushing that boundary right to the edge, it feels like a waste. And that’s the last thing I want. I’ve been granted a second shot at living. A chance many of my brothers and sisters who gave the ultimate sacrifice do not. I owe it to them to live life as fully as possible.

Mendiaz: I truly believe that most Marines push the envelope, and once I was injured I found out how resilient my body is, so now I push it more than ever. When it comes to life, man, you gotta use it up. You can’t take it with you.

Thinking back on the riding and learning experience as a whole, how do you compare dropping in to your first descent at the ranch to your last laps of the weekend?

Riley: [This is] maybe hard to believe, but I was a little apprehensive on that first drop-in. But by the end of the event, I was more confident and comfortable. Not just in reference to the event, but in terms of my mountain biking overall. Being around Weir, Moeschler and all the others pushed me and allowed me to learn a few things along the way.

Mendiaz: The first drop-in was huge and so rad. It took a little courage, but once I dropped in it was bombs away. Then riding the rest of the weekend made me step to the next level. I would have stayed at the ranch for years if I could have.

What was your most memorable experience from the event?

Riley: That’s a tough question to limit to one, so you are getting two. First, probably obviously, was duct-taping my feet to the pedals on the back of a tandem mountain bike and letting Weir pilot me downhill, only to hear halfway down, “Oh shit, we don’t have rear brakes.” [That] maybe scared me a little, but was a ton of fun and felt great to be sitting up and seeing the trails a little differently than I do on my handcycle. Though maybe next time we should check over the bike before heading downhill with no real way to stop.

The second was dropping the top hill at the ranch and leading the train of all the guys. Hearing and seeing a dozen riders speeding down behind me was exhilarating.

Mendiaz: All of the riders, people and sponsors that came to gather to make the event happen was the most memorable for me. So many amazingly talented people. Just a bunch of rad people playing with bikes on a gnarly ranch.

Riley: Is that even a question? Pearl Jam.

Mendiaz: I would break the stereo, get a boom box and blare the Dirty Heads or Fortunate Youth.

WTB has continued to partner the the Semper Fi Fund by creating a limited-edition version of the WTB Volt Team saddle, sales of which will support the organization. Check it out, here.