Note: This article originally appeared in Issue #155 (2011), but was one of our most popular stories and is still entirely relevant. Read, learn, then enjoy your rides!

Ever notice that your biking game just isn’t up to your usual pub crawl bar-to-bar speed? Been achy, run down, sick? And you only had four microbrews for breakfast? It could be that you’re more of a lightweight than in your younger days. Or, it could be that you picked up a little friend while biking.

Ticks cause more disease in the U.S. than mosquitoes or any other critter you can see with the naked eye. If you mountain bike, you will interact with ticks. Just because you’re bigger, and hopefully smarter, does not mean you will win. Ticks transmit diseases that can kill you. More often, they simply maim and drag you down for a bit. Several friends and fellow mountain bikers I know have been sick from tickborne diseases, including a recent master’s MTB Champion. In fact, I picked up a case of Lyme disease at a family reunion four years ago.

Anyone who spends any amount of time in the outdoors is subject to tickborne diseases. Others in your house, non-bikers (spouse, kids, friends), are also subjected to your wild ventures. Pet owners, in particular, are exposed—so if you take your dog (or cat) biking, listen up. Ticks often come home on your clothing, or your favorite riding friend’s fur—thus subjecting the innocent and unsuspecting to your wanderings.

Most tickborne diseases occur in the warmer months, April through October or so. However, ticks can be found year-round, even in the middle of winter on warmer days. Some ticks have been documented to go for more than 13 years without a blood meal. To oversimplify, ticks reproduce by oral sex (the male inserts his sperm into the female’s reproductive organ via his mouthparts—the same ones he uses to suck your blood.

Ticks can mate and lay eggs even after their brain equivalent has been surgically removed from their body (kind of like the average college student). Each female tick lays 2,500 to 5,000 eggs. Larval ticks, which can transmit disease, are often less than one millimeter in diameter. Hundreds to thousands of them can get on you from one egg batch, if you stop or sit in the wrong spot. Nymphs are about 2-3 millimeters, making finding them on you quite challenging. Adults also transmit disease, but because of their size, are often easier to find before transmission of disease occurs.

Ticks feed slowly. Most ticks are on you for about 24 hours before they begin to really feed—it takes time to get the juices flowing— juices that thin your blood so the tick can feed, and help to cement it into your skin. Oh, and those juices from the tick gut are infested with disease-causing bacteria. If you are astute and check yourself very carefully (more on this and other removal tips later), you can prevent most disease transmission. Many diseases require the ticks to be on for 24-48 hours before disease transmission occurs. Others, however, transmit disease in six hours, some in minutes. 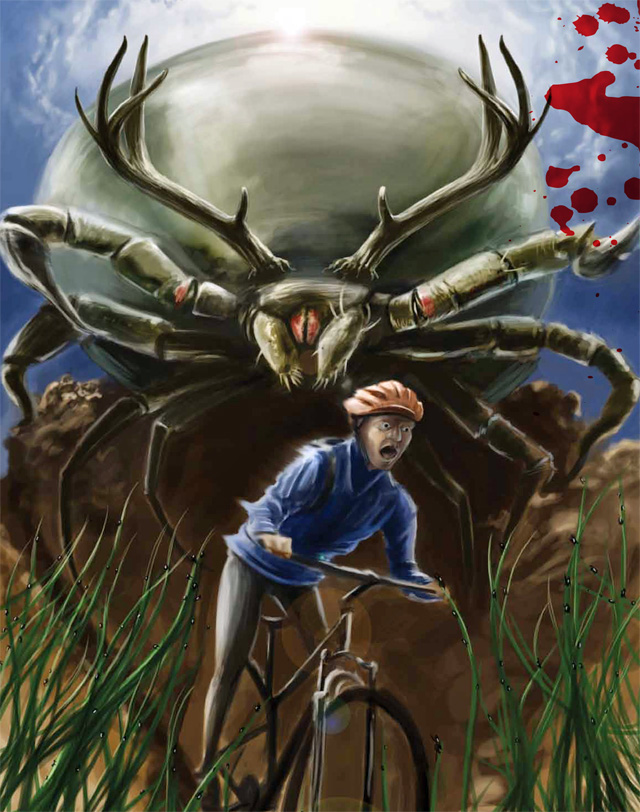 The top three tickborne diseases you will encounter in the U.S., in order of prevalence.

Lyme is most common in the northeastern states (roughly Pennsylvania/Maryland, east to the coast and north into Canada), and the upper Midwest (Wisconsin, Minnesota, and Michigan peninsula. Ticks that transmit Lyme disease (LD) are the deer ticks, or Ixodes ticks, most often the nymphs, which are only a few millimeters in size.

A few days to a few weeks after a tick bite, a rash may occur in about 75-80 percent of patients. The rash is often concentric reddish rings alternating with whitish rings, with a pale center, the infamous bulls-eye rash. About half of the cases may also have low-grade fevers (less than100 degrees Fahrenheit), body aches, etc. If untreated, there may be myriad arthritic, neurologic and other systemic complaints.

The key is to diagnose and treat them properly and early. Antibiotics in pill form treat early disease, are well tolerated, inexpensive, and prevent the more severe chronic problems. More advanced disease can be very debilitating, usually requires intravenous antibiotics (read as NO RIDING) for 6-12 weeks, and are very expensive, so get treated early. There is a close cousin to Lyme disease, in the southeastern third of the U.S., called Southeastern Tick-Associated Rash Illness (STARI). It is very similar to Lyme, but with less severe consequences, and is transmitted by the Lone Star tick. Treatment is the same.

Say what? This disease just became recognized as a human disease in 1990, though it has been around much longer. First diagnosed and recognized in Arkansas, it is now present and known throughout the world, and in nearly all states. Many different species and all stages, except the larvae ticks, transmit Ehrlichia.

Symptoms occur within three days to two weeks of a tick bite; symptoms include body aches/sore muscles, back pain, headache (sounds like the after-effects of any great ride), high grade fevers, (usually more than 102 degrees Fahrenheit), and sometimes other symptoms such as abdominal issues.

This disease can get you real sick, real fast. Often, hospital stays are required, sometimes in intensive care. It carries a 3 percent fatality rate, despite proper antibiotics. Do not miss this one. It is also called the “spotless spotted fever”, as in Rocky Mountain spotted fever, as only about 20 percent of people have a rash with Ehrlichiosis. To diagnose this disease, a good history and examination is all that is needed, though labs confirm it. Again, a simple antibiotic pill (the right one only), will treat it, and prevent any further complications.

Nearly 97 percent of the cases come from east of the Rocky Mountains. The Appalachians account for most of the cases, though there have even been isolated cases in the South Bronx. The wood ticks or dog ticks primarily transmit RMSF. The disease is transmitted in only six hours, so check frequently in areas where this disease is found. Symptoms are present within two days to two weeks of a tick bite, and can get bad very fast. This disease can become fatal in days in some cases, and carries a 3-5 percent fatality rate treated, over 30 percent if untreated.

Symptoms include headache, body aches, and fever, present in 70-90 percent of patients. The rash is a fine, red, sometimes blackened rash, and present in 85-90 percent of people. Many people have severe headaches due to bleeding issues within the brain, cough due to severe lung involvement, and other serious symptoms.

Again, with early diagnosis and treatment, antibiotic pills work just fine. There are a plethora of other tick diseases that you can encounter biking in the U.S., not to mention worldwide. Babesiosis is a malaria-like infection, with cyclical high fevers. Many diseases may be transmitted by the same tick bite.

A viral infection called Colorado Tick Fever, and a bacterial infection called Tick Borne Relapsing Fever (TBRF), can both be easily encountered on a ride in the Rocky Mountains, especially if doing a hut-to-hut type of trip. There are many other spotted fever illnesses found worldwide, often similar to Rocky Mountain spotted fever. There is a virus in Russia, called Russian Spring-Summer Encephalitis, which carries a 50% fatality rate. Luckily, there is a vaccine—if you plan to ride in eastern Europe/Russia, get the vaccine. 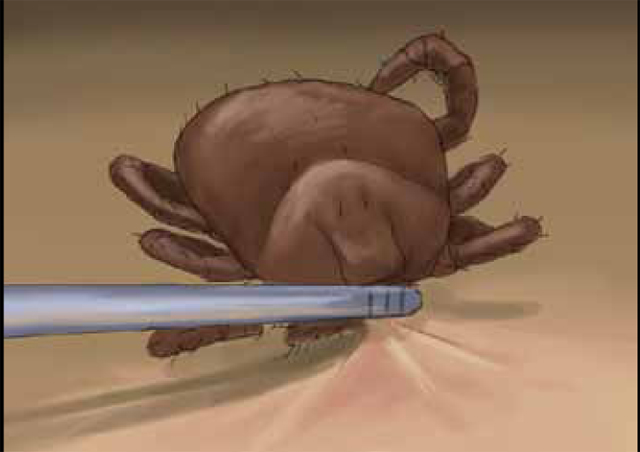 If you don’t mind the use of chemicals, use a permethrin containing product on your clothing/ gear, but don’t get this on your skin. Permethrin kills ticks on contact and lasts through many washings. Higher containing DEET products can be used on the skin, and deter or kill ticks. Shaving your legs like any good roadie will help your tactile response to feeling ticks on your minimally stubby/hairy legs, and you can get them off before they attach.

I personally just check myself really well for ticks while stopping to fix a flat, look at a map, or immediately when done with the ride. Change your clothes BEFORE getting into your car for the ride home. Bag your clothes to isolate them. Ticks will live for weeks in a car or house, without a blood meal.

You will wind up with ticks on you at work if you drive to/from the trailhead, then to work on Monday. I destroyed some ticks from my research that had been unfed for more than two years, and were very vigorous and hungry. Look carefully for ticks, and use a mirror, or a good friend/spouse/significant other/riding buddy, whomever, to check the nooks and crannies you can’t quite see or reach. Ticks like highly vascular areas, like your grundle, armpits, scalp, etc., so look really well there. Launder your clothes when you get home.

Dry what you can—a hot clothes dryer kills most (not all) ticks. Another trick is to fumigate the clothes in a bag with a rag soaked in permethrin, before laundering. Check your trail dog (or trail cat) upon returning home. Use Frontline/Advantage/Advantrix or equivalent on your dog if he rides a lot with you. Doing so prevents the female ticks from feeding and dropping off in your yard, leaving thousands of larval ticks behind.

What to do it you have a tick on you

Keep some fine-tipped tweezers in your bike bag. Firmly, though gently, grasp the tick as close as you can to the skin. GENTLY and steadily, retract the tick straight out, in the direction it is attached. It will almost always withdraw, making a clean exit. Clean the area with an alcohol wipe, and place antibiotic ointment on it. Watch for local infection, or a rash or other signs and symptoms at a later date.

Tick bites can get infected, as they don’t clean your skin before they violate your space, so watch for that also. Save the tick in a jar of alcohol for a while in case testing or identification is needed. I slap them in between pieces of clear tape if nothing else. Larvae, or “seed ticks” can be removed with duct tape, or scraping along the skin with a credit card or driver’s license. In most situations, no need to seek medical care unless any signs/symptoms.

What not to do

Whatever you do, skip the old remedies. DO NOT: light a match and touch the tick; use your bare fingers (always use tweezers); cover the tick with fingernail polish, petroleum jelly or any other lube, etc. Doing any of these will highly increase the chance of disease transmission (you will cause the tick to puke into your body—and remember the secretions part above, thus injecting a lot of bacteria into your bloodstream).

If you don’t feel well, and are reading this, you very well may have a tickborne illness. These very often mimic a typical summer cold. Explain to your doctor that you are a mountain biker, and spend a lot of time in the woods riding and building trails. If your doctor doesn’t listen, well, find a new one who does. History is key in making a diagnosis, especially with tickborne diseases.

Disclaimer: Any concerns, see your doctor. I am a doctor and avid biker. Please don’t sue me for disagreeing with me or if you get ticks. I have no control over them, and they are responsible for their own actions, as are you and I. Just remember, TICKS SUCK!