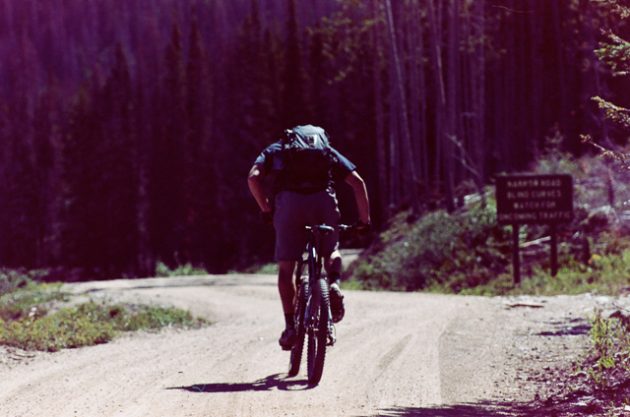 Words and photo: Chris Milucky aka Bama
From “On the Road With Bama,” a column in the print magazine
Originally published in Issue #191

A child of the ’80s, I began my photography with a plastic 110-film camera. The pictures were pretty bad, and I think it’s fair to share the blame with both my inexperienced hands and the cheap-o foto gear. These days, I have both a nice film camera and a nice digital one. The film camera has incredible character, but it’s slow, tedious and easy to make mistakes with. The digital camera is small, light and fast. Via super-slick software, most of the pics are winners, and the losers are simply erased—no big deal.

I’ve got the same thang going down in my Bike Nerd Depot: analog and carbon. There’s a steel fat bike and a carbon shredsled. The steel fat bike’s dents and scratches are covered in layers of camo duct tape and spray paint. She’s slow. She’s heavy. She even has a few “aftermarket welds”—a prized statement of her age—holding her trusty, rusty pipes together in a geometric pattern. She’s taken me on ethereal endeavors to the nether regions of my mind and to happy hour at the deserted desert bar in dusty Cleator, Arizona.

On the other handlebar, the carbon shredsled’s got boatloads of high-tech suspension rigged fore and aft. I can ride that bike wildly out of control and still steer ’im back into sanity. He brings safety and confidence to speeds in excess of Mach-looney. He’s light, strong and never gets a flat. He’s happy in the high country, smiling like a sunny-morning marmot. I’ve taken him all over hill and dale—heck, he’s even rolled singletrack strapped with bikepacking gear.

So which is better, full suspension or fi lm? Digital or steel? Of course there’s no way to answer such a query. The brain says digital while the heart says analog.

Personally, I like it all. I like the feeling of an old, heavy mechanical shutter slamming open and closed, followed by tediously winding film from one side of the camera to the other. I like riding a rigid steel scoot across rolling singletrack and sensing every nuance of rock and root from the tires to my teeth in bone-shaking bliss.

I love the carefree nature of digital photography. I can take a zillion pictures in different settings, in all sorts of crazy angles, and easily delete the ones that didn’t work out and post others instantly on social media all from the comfort of my high-tech carbon-fiber radwagon. And since that hoss is light and smooth, I have enough energy to hustle whichever camera I’m in the mood for. I can ride forever and get weird on techy stuff. “Ohh, so there’s a bunch of rocks? I’m-onna jump all of eet!”

Harley, Honda, sandals, steel-toe, floral, flannel, forever, for the moment, make the most of it, move on—ride your bike or turn this page.