Blast From the Past: Last Chance for Gas: Issue #172 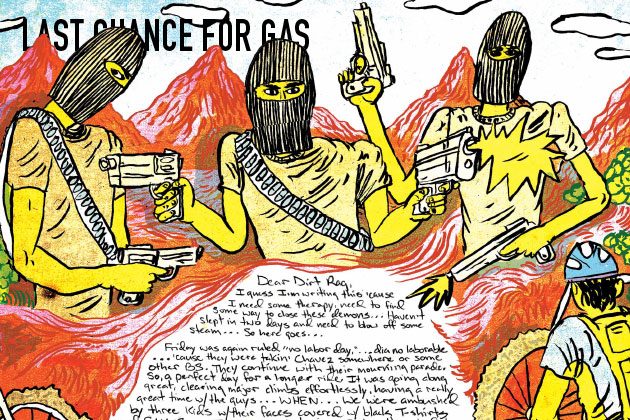 I guess I’m writing this ‘cause I need some therapy, need to find some way to close these demons … Haven’t slept in two days and need to blow off some steam … So here goes …

Friday was again ruled “no labor day” (dia no laborable) ‘cause they where takin’ Chavez somewhere, or some other BS. They continue with their mourning parade. So, a perfect day for a longer ride. It was going along great, clearing major climbs effortlessly, having a really great time with the guys … WHEN … We where ambushed by three kids with their faces covered with black T-shirts and GUNS … I mean one shotgun, and the others had two, like 9 mm or similar, but the bullet holders where from machine guns or something. We are talking PLENTY of bullets to go around … So OH SHIT. Really calmly they asked us for watches, phones and whatever was valuable in our Camelbaks. Then more cyclist started arriving, and at one point we were about 20 riders … We are talking iPhones, GoPro cameras, Contour cameras, all our tools cause “they where cyclist too.” All the time shouting that “they were sick of our shit and wanted to blow our heads off.”

This went on forever, at least 15 minutes, and the younger one they called “Menor” started getting nervous. It was really quiet, no more riders where coming, but the leader kept yelling at them to go through ALL the packs, then he asked us for our gloves, he wanted to strip off our shoes to leave us “like the Chinese,” he yelled.

Then THE SHOT RANG OUT!!!! Everybody jumped; we where so close to our captors, I was about one meter away … really loud and dry sound … then the gun powder … can’t get the smell out of my head … It got really quiet again. They kept at it, all this time. I was looking at the ground and praying, praying, praying … thinking of my three beautiful children. One of the cyclist said, “He is bleeding, you shot him.” It was Ernesto Braun, in the lower leg, by the shinbone. He was loosing a lot of blood. We pleaded with these guys to leave so we could get this guy to a hospital, but no, the leader got really pissed, demanded that they continue to go through the packs. The shooter said, “The shot fired accidentally.” They where gone in 5-10 minutes with their loot, not before the last threatening scream that they would love to blow our heads off, “Mamahuevos” (c***suckers).

We immediately started a four-man relay … four guys carrying the wounded for 25 meters, then another four guys. We had a long way out of the woods … luckily one guy had a chance to throw his phone into the woods and later retrieve it. We called 911. Another faster rider bolted down the trail to get help, and a white Jeep was awaiting for Ernesto about one kilometer up the trail …

He was taken to the emergency room and is OK.

We’ve published a lot of stuff in 26 years of Dirt Rag. Find all our Blast From the Past stories.