Feature: One if by Bike, Two if by Kayak 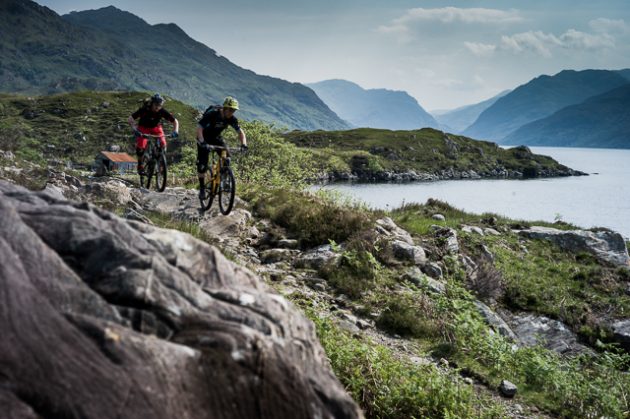 “It looks farther when looked at through sober eyes,” mutters Taj Hendry, more with surprise rather than alarm. Laid out before us on the gravel beach is a map showing the trail we’re going to ride. But it’s not the trail that has Hendry rubbing his beer-blurred eyes in a cold-light-of-day moment, but the realization that to reach the trail we’ve first got to paddle kayaks across nine miles of open water.

Sea kayaking on its own is no big deal. After all, people have paddled these sleek, efficient boats around Antarctica and across the Bering Strait. What will make it harder for us is the fact that, tied to the back of our kayaks, are inflatable rubber rafts onto which we’ve lashed our bikes. In one single moment of clarity—or madness, depending on how you look at it—our once-streamlined kayaks have become slow, lumbering tugboats. It’s like using Donald Campbell’s recordbreaking speedboat, Bluebird, to tow a barge. 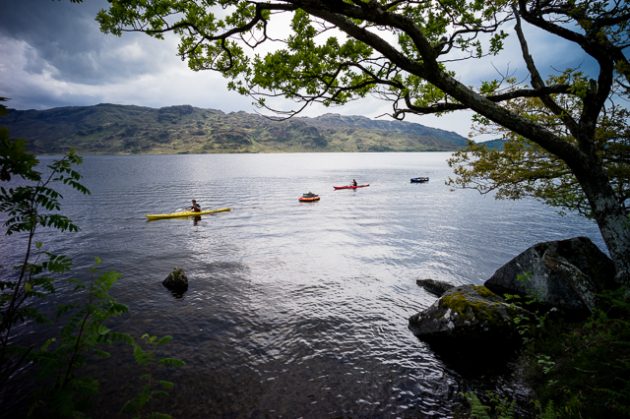 But here we are, stashing bivi bags and overnight kits into the hatches of three sea kayaks and checking the knots that will stop our precious bikes from disappearing to the bottom of Scotland’s deepest loch, Loch Morar, located in Lochaber, Highland. Ahead of us sits a lot of hard work, a little pain, a few midge bites and one major mechanical.

But this beach is also the start of two nights and three days of unique adventure. With midge repellent applied, we push off, floating out onto crystal-clear waters and beginning to paddle toward a cluster of beautiful islands. Brightly coloured mail-order rafts reluctantly but obediently limp along behind like lazy, overweight pet Labradors.

Water and bikes are not logical bedfellows, so the idea to use kayaks to move between trails involved a little head-scratching when it was first mooted between Nick Bayliss, Royal Racing clothing’s designer, and myself. There are plenty of bridleways that run alongside rivers or lakes in the U.K. that could be accessed by boat, but how do you make this idea into a real adventure? “Use kayaks!” we reasoned, unsure then how we’d actually get our bikes onboard. With a little lateral thinking, we soon realized that using an inflatable boat as a bike trailer was key, giving the kind of stability to our cargo that would mean we arrived with our bikes at the other end.

And so a plan was hatched, and to give it a real wild and woolly feel, we plumbed Scotland’s west coast as the ideal location. Here, we’d get a real sense of untamed adventure, while Scotland’s liberal “right to roam” policy meant we’d unlikely cause a fuss camping out on the side of a loch (or lake, as it were).

That’s why we chose Loch Morar. With an established trail running route along its northern shore and a couple of lesser-ridden, more remote trails winding their way out from its eastern and southern shores, we had plenty of options. Throw in its location near a kayak rental base, cheap hostels and pre-adventure beer in the village of Mallaig and we had a plan.

All we had to do now was load up and paddle to the trailheads. Our idea raises an eyebrow from Mike at Sea Kayak Highlands when we turn up to get our boats. “It’s the wind that’ll cause you problems,” he says, trying not to look overly concerned. Mike’s Sea Kayak Company is used to showing people the stunningly beautiful west coast between Arisaig and the Isle of Skye. He leads kayakers out to local seal colonies and takes them dolphin spotting. He’s not used to people wanting his boats to tow dinghies laden with mountain bikes.

“When the wind blows in from the east, it funnels down the loch and you’ll not get anywhere towing a dinghy behind you,” he advises. I look at my two fellow adventurers. “We’ll have a bash,” I say, adding, “we’re all pretty accomplished paddlers.” With a window of only four days for our three-day adventure, we’re left hoping the wind stays calm, or perhaps, considering we’re in normally windy Scotland, that it is at least blowing on our backs.

Out on the loch, we settle into a steady pace. Long, mellow paddle strokes equate to spinning the cranks when you’re freewheeling: applying just enough pressure to add a little forward momentum without hurting. It’s May and we’re lucky: We begin our epic under clear skies and bathed in sunshine. Little do we know that our return paddle will be in lashing rain while battling a headwind.

Two hours later we go to shore for a brew up and to rest our shoulders. Kayaking is all upper-body workout, something we’ll feel later pumping our bikes along Loch Morar’s technical, rocky trail. It’s then that my two kayak-and-crank aficionados, Bayliss and Hendry, come clean on their previous kayaking experience. Between them they’ve accumulated approximately a weekend’s worth of paddling, and confess that much of it was spent swimming rather than staying upright. 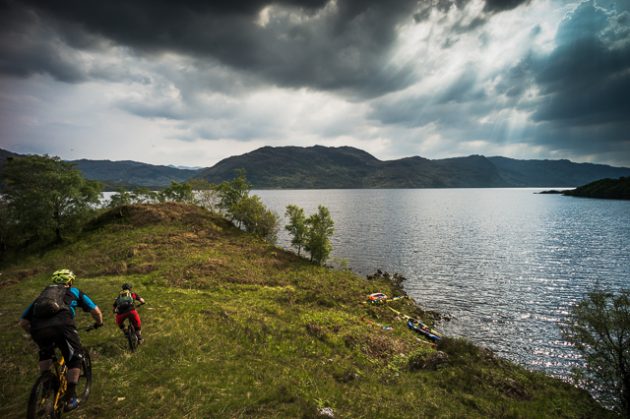 Despite my own previous competition-level kayak experience, I’m anxious. I look out across miles of placid Scottish water and pray the weather stays with us. Even in May, the water in the loch is hand-numbingly cold, meaning that capsizing in open water would require a very quick rescue before hypothermia sets in. I advocate hugging the coastline, disguising my suggestion as increasing our chances of seeing otters. I have no idea if Loch Morar even has any otters.

It takes us five hours to reach our planned camp spot at Swordland. We pull kayaks and rafts up onto a rocky shore and set about with some much-needed beers. A large cake appears from Hendry’s boat with the announcement that it is his birthday, along with several bottles of ale and some decent dregs at the bottom of a bottle of whisky. Around a small fire lit to waylay the midges’ evil intents, we sit and chat and absorb our stunning surroundings as the sun makes its slow dip toward the horizon. We have the place to ourselves. 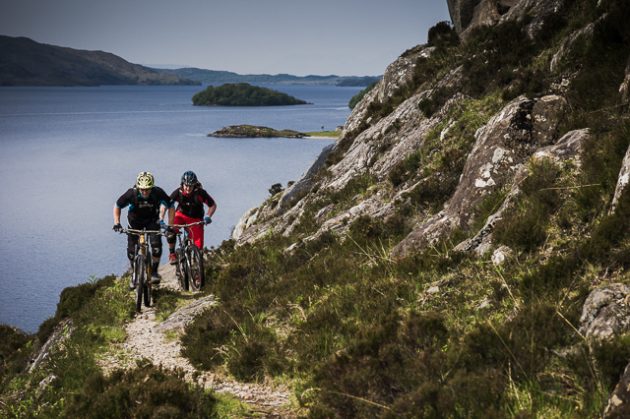 It’s fair to say that the trail we ride the next morning is as good as you’ll get anywhere in the world. It’s also fair to say, at the risk of piddling on our own adventure bonfire, that you don’t need a boat to reach it. Running the length of Loch Morar’s northwestern shore, you can ride it as an out-and-back from Morar village or grab the Knoydart ferry from Mallaig to Tarbet and ride back from there, via Swordland. But for our first kayakand- bike adventure it makes a good start point, and if the legendary Morag—Lock Morar’s own mythical monster—swallowed up our kayak’s we’d still be able to escape by bike back to civilization.

Bivvying is a simple existence, uncluttered and unfussy. It takes us little time to pack up camp and stash gear back into the boats after breakfast and get out on the trail. We ride over to Tarbet first, just to have a look at Loch Nevis—another pedal-and-paddle candidate we considered—before climbing back to Swordland and riding west.

The trail is a schizophrenic mix of flowy singletrack and tough, committing rock ledges that demand front-wheel precision. Get it wrong and it’s an early, if much needed, bath in the peaty loch far below. We climb high above it at times and descend to the edge at others, and then repeat the pattern all the way to its western shores and yesterday’s kayak launch beach. Here we sit and devour energy bars before turning around and riding back. By the time we reach camp we’ll have climbed 2,400 feet and descended the same. Alternating rock gardens and puddles of mossy mud keep us on our toes and short, sharp climbs punish our lungs.

It’s a perfect natural trail and we’re having a blast until a peaty bog takes its toll. Although looking shallow, this pungent beast turns out to be hub deep, and as Bayliss tries to clean it, he’s pitched over the bars. He escapes with no worse than mud-soaked gloves, but his carbon framed bike is history. Coming down on a rock, the right-side chainstay has been snapped cleanly in two. We’re about a mile from our kayaks and he’s forced to limp back gingerly. The broken bike might have scuppered our following day’s ride plan to hit a trail from Meoble heading south to, and along, Loch Beoraid, but it’s not dampened our sense of adventure. 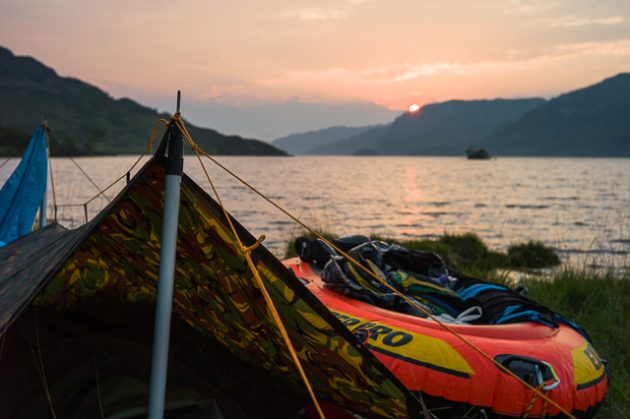 Beneath the caress of a glorious late-afternoon sun, we load our bikes back onto our dinghies and lash them down tight. “How many knots are too many?” I wonder. We launch our flotilla and paddle across the loch as planned for our second night of beer- and bun-infused bivvying. It’s a one-mile paddle across the loch and I’m thankful the weather is still on our side. Our traverse takes us across the deepest part of the loch, with 1,000 feet of cold, dark water disappearing down beneath our boats’ hulls. It’s the perfect place for a Morag hideout and a risky spot if we suffered capsizing.

Our crossing is without issue, and as we reach the southern shore we are greeted by perhaps one of the most stunning bivvy spots you’ll ever find: a crinkled shore of tussock grass punctuated by pure white-sand beaches. Encouraged by the fuzzy embrace of ale, I take a post-ride bath in the loch before settling down around a campfire to eat a freeze-dried meal from a foil packet and watch the sun set to the west. Life is beautiful.

Tomorrow’s plans to ride have been scrapped thanks to the bike breakage, and even though we awake next morning to the sound of rain on our bivvy shelters, it’s still with reluctance that we have to move on. This is one of the most beautiful places I have ever been, even in the rain. Just behind camp, a primordial forest of weather-twisted trees hugs the hillside, and across the open loch swirls of mist swallow up any sight of the trail we rode.

Dressed in GoreTex, we climb into our kayaks for one last push back toward home, a four hour paddle through driving wind and rain. My hands are wrinkled and numb, my ass soggy and rivulets of water are running down my face. My shoulders ache and at times the wind blows so strongly I’m brought to a standstill right in the middle of the loch.

For a moment I curse the inflated dinghy that’s acting as a sea anchor behind me, cursing the ridiculous effort I’m needing to cross this patch of water. Near the northern shore a motorboat skims past, effortlessly. And then I remember: If it weren’t for this damned dinghy behind me and its ingenious bike-carrying potential, our adventure wouldn’t be happening. I’d have not camped out with friends and shared a birthday so uniquely. I’d have not returned from a ride to paddle a kayak across a loch to a beautiful beach. And so I dig deep into my energy reserves and smile through my grimace, and ahead of me I think I can sense Hendry and Bayliss doing the same.

Five things to consider when kayaking with bikes

Don’t miss stories like this one. Subscribe to our weekly email newsletter to get adventures delivered straight to your inbox. No spam. Just bikes.