Blast From the Past: Guerrilla Girls 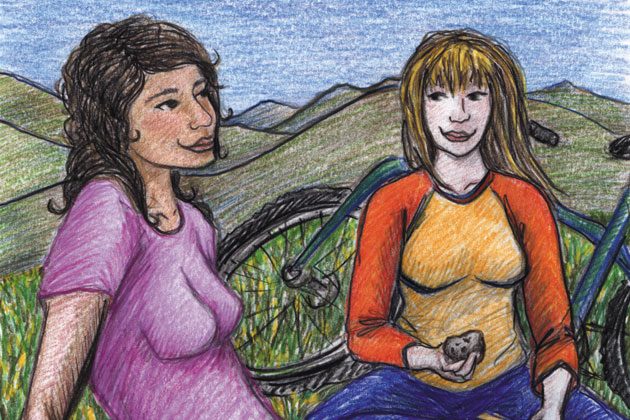 I arrived in California on Groundhog Day of 1982, a refugee from New York in high-heeled shoes and too much makeup. My home was a 1973 Buick, avocado green, of course, with a vinyl roof whose tattered strips flapped like sails in the wind. I carried all of my worldly possessions in the trunk of that car—they were stashed in Hefty trash bags, which I referred to as my matched luggage. I was broke, beyond fear, and had been living on coffee and potato chips. I wasn’t even sure what I was looking for, but when I saw cattle grazing on pastoral green hills right next to a freeway, I remembered that there always is a someplace else—and the best of it is still covered in dirt.

I learned later that the hills I had glimpsed that day were part of the vast undeveloped ranch property which skirted the county where I would make my home. And as luck would have it, I was soon to meet a shy young man who knew every unpaved inch of those open spaces and had explored it all on a bicycle.

A road rider for many years, he had shifted terrain in the mid-seventies and discovered a distinct preference for the dirt. He had been pedaling quietly ever since through parks, ranches, wilderness and various unincorporated areas. Mountain biking was not a … It was a secret.

Why I was lucky enough to get in on this, I’ll never know, but perhaps God looks out for New York girls who burn all their bridges and don’t look back. I rustled up a fat tire bike, and the fun began. This wasn’t some slick lycra-clad fanaticism, mind you—it was much more akin to the Saturday mornings when you were 10 years old and wheeling around in dungarees and sneakers. And there was so much world to explore! The practical details of my life worked out, as they usually do—I found a job and a place to live—but what I cherish most are the days spent riding where the pavement ends.

Those early years had a kind of guerrilla feel—we discreetly explored local ranch land in colors that would camouflage, taking meticulous care to leave no signs of our presence. Even so, we were occasionally chased by cowboys and buzzed by helicopters. There we’d be, crouching in the bushes during a night ride, just beyond the headlight beam of a ranch truck. The world was our playground, and there were so few of us then that spying another fat tire track was noteworthy; we could usually identify the owner by its tread. We had our own little loops and favorite spots and gave them nicknames which are used now by people we’ve never met.

There were girl’s rides too, which had a spirit of their own. We’d ride hard, but we always noticed the wildflowers and stopped for cookies and laughed like water. Sometimes we got lost. There was the time we were riding near a military base and found ourselves cutting across an officer’s golf course to get back. “Hey you!” shouted an irate old man with a golf club. Teresa simply waved and smiled, and we sailed by. When Teresa smiles, no one stays angry. If all else failed, she could have offered him a cookie.

Such encounters were not always so frivolous and benign. One afternoon, we took a wrong turn and came face to face with a nutcase who introduced himself as Ranger Bob. Ranger Bob wanted us to know that we had ventured upon property belonging to the Boy Scouts of America, and that if he were to shoot us right there and bury us with our bicycles, “Ain’t nobody in hell gonna find you.” Even righteous Christine resisted the temptation to argue. We kept calm, offered up our most respectful apologies and sped away in the opposite direction.

Oh, the friendships we formed! There is nothing like a shared challenge or shared wonder to strengthen a bond, and we had both. I think of the hills on April mornings, blinking in the sunlight, shocked by mustard flowers almost too yellow to look at straight on. I’m riding with Christine or Donna, and our talk is strewn like trinkets in our wake, but often we are silent, calmed by the crunch of tires on gravel, sustained by the simple rhythm of our work. I admire Christine’s easy, spirited grace; I’m impressed by how Donna managed that rocky climb. We hoist our bicycles over our shoulders to get across a sketchy piece. We know the happy tiredness in our legs, the flush of small successes, real as rock, the corkscrew burrs all married to our socks, the scent of sage clinging to our clothes.

In time, I was married and living in the middle of a state park surrounded by open spaces. Girlfriends came calling on summer afternoons and we’d disregard deadlines, put our bikes over the fence and ride head on into the parched blonde hills. With flushed faces and sweaty bandanas, we’d sail into the sullen face of the day, giggling incongruously. Maybe we’d pause while the straw hills crackled and buzzed like electrical wires, as our shadows lengthened and the thistle flowers turned iridescent purple in the dusky light.

Later came babies who grew up thinking an ordinary day was one spent bouncing in a Burley trailer along the mountain roads of Baja or the White Rim Trail. And there were solo rides along familiar loops, sometimes listening to music—Queen Ida, who always made me move faster, or tapes of patchworked sixties stuff. Or maybe I’d just be thinking or praying or slipping into the space between moments. Being on a bicycle in the backcountry is conducive to that.

There were wildlife sightings, too—coyotes, bobcats, an elusive fox, a pair of badgers out for a stroll. Always we went home with a secret smile and a delicious sense of having gotten away with something. “Do you really ride these bikes out on the dirt?” people would ask us. We tried not to make it sound like too much fun.

But fun it was. And though responsibilities have swept us along in mighty currents, and epics have been replaced by the stray sorties of a stolen hour, this hasn’t changed. My best friends are still my bike friends, and a good day still includes time on two fat tires. It’s a truth like any other, as real as the dirt at the edge of a city. There is a wild place out there for a Huck Finn spirit. And your bike is always waiting like a promise to be kept.