Blast From the Past: Gunnar Shogren Interviews Floyd Landis 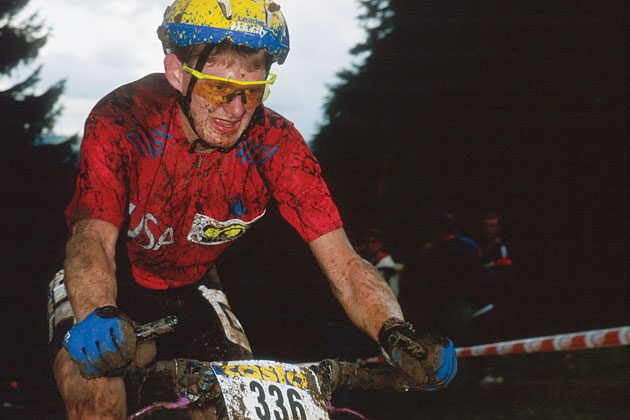 Summit Near the Summit, or “Clowns at the Round Table”

This began innocently enough with an idea to interview a new face on the national and eastern racing scene: last year’s junior national cross-country champion Floyd Landis. Also out here milling around is my friend and nemesis Willy, who is also looking out for Floyd. They have become buds since teaming up for Diamondback’s 24-hour race at Canaan.

Floyd has been turning heads during his short tenure in racing, and for good reasons—he has been placing top five in nearly all the nationals this year along with whooping butt in the East.

Willy Goeghegan, a name that no announcer ever gets right, has been nipping at the heels of many top road and mountain bikers for the last couple years and seems to be coming of age as he matures into the fine young man that we all knew was there.

It is here in Spokane that Floyd had his only bad national race, and Willy had a fantastic 18th in the Pro/Elite.

[While reading this please make my voice calm and worldly, give Floyd that eastern rural Pennsylvania drawl, and Willy talks in a hyperactive semi-high-pitch squeal.]

Gunnar Shogren: So tell me guys, what are your birth dates and where do you live?

Willy Goeghegan: Born December 27, 1971, live kind of in Cincinnati, Ohio, with my folks or out of my Vanagon.

GS: What did we all have for breakfast?

GS: Melon, coffee, old bread and Gatorade. Trying to finish the food in the condo you know.

FL: Yeah and I slept on the pavement wrapped up in a banner until Don came back at 3 a.m. and opened the trailer up. Then I woke up at 6 a.m.

WG: Humm, it’s been a while since sleeping on the pavement. What pleasant thoughts that evokes.

[Pat White from Machine Tech stops by, wondering what all the commotion is about and readies himself for downhill runs.]

GS: Floyd there are a lot of rumors about you and your family, how about setting the record straight for us.

FL: Well, we are Mennonites and we do have a car. I don’t live on a farm. I have four sisters and a younger brother, and that is just how it is. I never raced BMX, got my first mountain bike in ’91 and broke every piece on it. Raced in sweats not because my parents didn’t want me wearing Lycra but just for fun [that was Big Timber].

GS: So the story about you finding a bike in a ditch and racing plow horses is unsubstantiated, eh?

WG: Have you ever stolen or done bad things like that?

FL: No, I’ve never stolen [a trait that he and David Weins share].

WG: Oh, man I was shunned by the church, used to steal money to get Atomic Fireballs.

[Mary Grove, wife of a Team DBR assistant, butts in about the downhill bus loading spectacle and something about not doing this right.]

GS: How about you Willy?

WG: I was raised on mountain biking; it’s the coolest thing man. My first race was in the fall of ’89, at White Oak. Got end beginner. Everyone kept talking about this Gunnar guy who was so rad. I saw you there and decided that I was going to be just as fast. Then I did Hidden Valley and won the beginner class.

GS: This is your first summer without school in the fall, isn’t it Floyd? What are you going to do now?

FL: When I get back home I’m going to go to the beach for a week, but I don’t know with whom. Then race the rest of the season. I’ve got a job as a cashier boy, and I won’t be going to school in the fall.

WG: Yeah, but we have to find a ride back to Reno or we won’t be going anywhere.

WG: After high school I went to O.U. My first chance for responsibility and I blew it. I was the resident lightning rod.

GS: So what did we all think about the race yesterday, besides the fact that I did okay and Willy did great?

WG: I thought the course had lots of everything.

WG: It’s really good to know that I don’t suck anymore, that is what I like. I passed 10 people on the last lap.

FL: I’m pretty upset with the race. It would have been better if I flatted twice or something like that. I’m really mad about it, but it’s good to be mad.

[“I ended up in third, with no mechanicals for a change and got this trick-ass medal!” replies Chandler Weeks (Team Hooters) before he leaves the mountain to catch his flight, which he misses anyway.]

GS: The Canaan 24-hour race was pretty tough, but a good time, eh?

FL: Yeah it was, but I don’t know if I will do it again next year. I was really tired.

WG: What do you mean, you were flying after that.

FL: But I drove back home on Sunday, went to school and slept in class. So tired.

GS: That’s because you were always up, running around.

FL: I had my first Mountain Dew there, and after a packet of GU, I was doing wheelies for two hours, didn’t sleep at all.

WG: We took his bike away hoping that he would settle down, but he took my bike out and rode wheelies on it. What a kook. You need to relax like me Floyd. I didn’t sleep either, but I’m ready to do it again, it was such good racing and training.

GS: Word has it that they (NORBA) are going to make you turn Pro.

FL: I talked to Brian Stickel, and he said that since this was my first year racing senior, I could upgrade next year.

GS: Are you going to turn Pro?

FL: Yes I am! I really don’t know what to ask for and all that though.

WG: Someone should be giving you the full ride man.

WG: No problem, man. These guys are my only friends, right here [Exclaiming this to passersby who seem to keep their distance from us].

And we three go our separate ways, myself rushing to the condo to get to the airport, Willy to find a new supplier of Jolt and Floyd to search for some much needed rest.

Posted in Blast From The Past In Print Racing