Interbike, #sockgate and women in cycling

Allow me to set a scene for you: It has been a long and arduous journey for women in cycling, from those who work with bicycles for a living to those who simply find joy when riding them. For decades, we haven’t been seen as equals or deserving of either employment or representation because we don’t measure up or shred hard enough or constitute a large-enough market. Still, those of us with decades-old passions for cycling, myself included, found avenues and bicycles and gear and just did what we loved, which was to ride.

Meanwhile, what we longed for was to be seen as “cyclists,” not as objects. All we really wanted was for bike shops and bike companies to acknowledge our existence even a little bit. Interested in women shopping with you? Be nice; it’s that simple. I don’t need to be treated like a princess or given wine when I walk in your door. I only request that you not be a dick to me.

Apparently, this is still sometimes too much to ask. It’s Interbike week and we were greeted yesterday morning with the news that official attendee bags had been stuffed with socks featuring the backsides of two women in barely there bikini bottoms. Interbike has since offered an apology (see below) and explained that the socks were shipped per a sponsor agreement and the attendee bags were stuffed by volunteers. (As of Tuesday afternoon, Interbike removed the socks from the remaining bags.)

It doesn’t really matter who is or was responsible for filling thousands of goodie bags with socks that are demeaning and exclusionary. What matters is their association with the bike industry’s biggest trade show. What matters is that someone, somewhere, thought that it was acceptable to officially represent the bicycle industry’s biggest, most “professional” event with a revealing graphic of butt cheeks, and that sucks. All one has to do is look around the Interbike show floor and realize this isn’t a bro-only industry anymore.

Prior to “sockgate,” I was on a high about my beloved bicycle industry. I just came from five years at the International Mountain Bicycling Association (IMBA) where I worked with a staff that is one-third female. In my tenure there, I had the privilege of getting to know the coaches of several rapidly growing women’s mountain bike clinics, the tireless female leaders of mountain bike advocacy groups across the U.S. and the participants of women-only mountain bike races. I was also beginning to notice more companies including women prominently in their print advertising.

Hell, I was just discussing my appreciation for the lack of scantily clad booth babes at this year’s Outdoor Demo, something I saw en masse in 2010—the last time I attended Interbike.

Considering the many good things happening for women in cycling, ass socks might seem like a small thing. But under the bright lights of what Interbike is—an event intended to help grow and expand this industry—ass socks are indicative of a pervasive misogynistic attitude that is continually excused and refuses to go away.

I spoke to industry veteran and marketing manager for Pivot Cycles, Carla Hukee, about this. “It’s not that this is just a one-time incident; rather it’s the fifteen-hundredth time something like this has happened,” she said. “These incidents are coming at us in a steady stream.” Hukee also pointed out that Pivot employs several women, which is a significant reason she is proud to be working there.

Exclusionary, demeaning marketing moves (beyond this one instance) need to be called for the bullshit that they are and that is why Pivot’s female staff was more than willing to gather at Outdoor Demo for the featured photo. They are proud of their professional status in the bicycle industry and wanted to show you that it’s not just men working on behalf of your favorite brands.

Interbike—to its credit—is making a significant effort this year to promote and recognize women in cycling. Interbike is hosting an indoor space called “The Women’s Collective” which I hope will be well attended and taken seriously. In conjunction with organizations like PeopleForBikes and the Outdoor Industry Women’s Coalition, attendees can choose from multiple panels, seminars and product line presentations (some of which we will report back on). The collective will also serve as a conversational space for women and men to discuss and learn about the state of the women’s cycling market.

But the socks also run counter to Interbike’s own 10-point “Manifesto,” which was published with the intent to “begin to take action toward a more sustainable future and a prosperous industry.” The document came into being following Interbike’s January 2015 Independent Bicycle Dealer Summit and specifically calls out women as one the the “greatest opportunities” for the future of the bicycle industry.

Should none of this move you emotionally, perhaps take a dispassionate economic view of the situation: 46 percent of outdoor participants are females (Outdoor Industry Association); 24 percent of all bicycle trips in the U.S. are made by women; and the number of “enthusiast” women cyclists (the most active) increased by 8 percent from 2000 to 2010.

Simply put, if you don’t want to alienate a growing segment of your buyers, don’t scoff at the idea of purposeful inclusion and thoughtful marketing. Don’t shun a little good taste for the sake of a cheap laugh. Yes, we are in Las Vegas, a city in a state that has pockets of legalized prostitution. Does that make ass socks acceptable? Absolutely not. Just because you are forced to attend a family gathering with your racist uncle doesn’t mean you can suddenly turn on your black friend and demean him in front of others.

In remarkably timely fashion, the current issue of Dirt Rag—our first “personality” issue—comes out today at Interbike and features professional downhill and enduro mountain bike racer Amanda Batty on the cover. Her interview is a no-holds-barred discussion of the sexism, misogyny and double standards often found in cycling and its media. 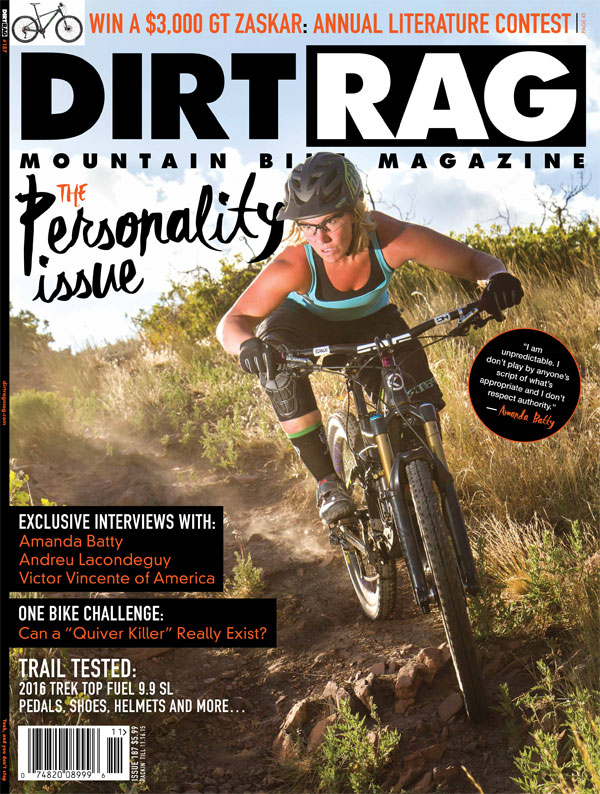 Over the years, Dirt Rag has learned much about what our readers expect, prefer and appreciate, and we’re pretty damn proud that they seem to be a level-headed, fun-loving bunch interested in shredding, imbibing and adventuring with male and female friends alike, not bothering to spend time objectifying women.

But in the year 2015, the Dirt Rag staff shouldn’t suddenly feel like outliers that the cover of our latest issue features a woman riding a mountain bike on a technical trail. It shouldn’t have to be seen as “taking a stand.”

I can claim no credit for the current Dirt Rag issue, but I’m immensely proud of my colleagues for taking it on. Before I showed up, the small editorial team steering Dirt Rag and Bicycle Times was fully fueled by testosterone but, clearly, it did not matter.

You should not need to have women around to view them—and support them—as riders rather than figures to be objectified.

In addition to this, please read what Christina Julian wrote on the Surly Bikes blog about this issue, especially if you still don’t think objectification of women constitutes a real problem for the bicycle industry. Julian is Surly’s marketing manager and her piece is personal, honest and compelling.

Here is what Interbike had to say:

Official post on the Interbike Facebook page:
“There was an unfortunate incident with socks in our OutDoor Demo bags. It was part of a sponsorship and the bags were stuffed by a third party organization. This was a mistake and is not how Interbike rolls. We have removed the socks from the bags and apologize.”

Comment from Justin Gottlieb, Director of Communications and PR for Interbike (found on a Facebook discussion feed):
“… We in no way meant to offend anyone and are sensitive to the issue at hand. We are researching the situation right now to see what happened, but it seems as though a 3rd party received and packed the socks in the bags without our review. Had we seen them, we would have never let them in the bags. We apologize for the mistake, and are pulling them out of all bags as we speak. Let me know if you have any other questions.”