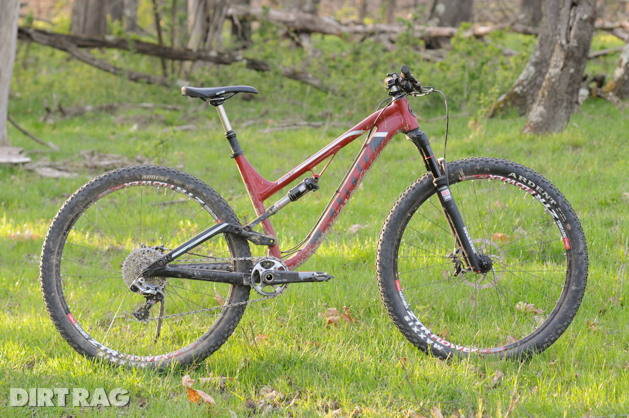 The Process 111 is the shortest of travel and biggest of wheel in Kona’s lineup of enduro bikes. Focusing on a slight 111mm of rear suspension and 29-inch wheels, it’s easy to wonder how an XC bike ended up with the longer-travel 27.5 offerings, which includes the Process 134 and 153. But, taken as a whole, the 111 may be one of the most curious trail bikes on the market today.

Kona ships all Processes with stubby 40mm stems. While these short stems are the most noticeable feature, they’re just one facet of the overall geometry package, which includes short chainstays, a low bottom bracket, a long top tube, a slackish head angle, and a whole lot of standover clearance. One of the compromises that needed to be made for that low bottom bracket (13.1 inches) and the short stays (16.9 inches) was eliminating the front derailleur to make room for the suspension bits and the tire. This also makes space low on the frame for the suspension, dropping the bike’s center of gravity and allowing for 28 inches of standover height. 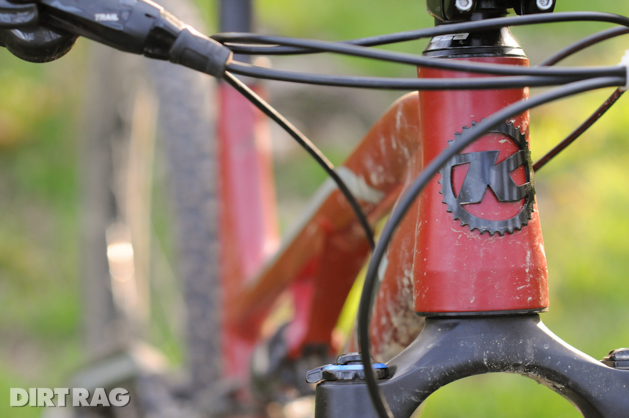 With a full SRAM XX1 kit, I didn’t miss the front derailleur, and the rest of the build was well suited to rough use. The wheelset is low key, with NoTubes ZTR Flow EX rims laced to Hope Pro 2 hubs, and there’s a KS LEV Integra dropper and 785mm Race Face Atlas bars. RockShox holds up both ends with a Revelation RCT3 120mm fork and Monarch RT3 rear shock, and brakes are a problem-free setup of SRAM X0 trail with 180/160mm rotors. 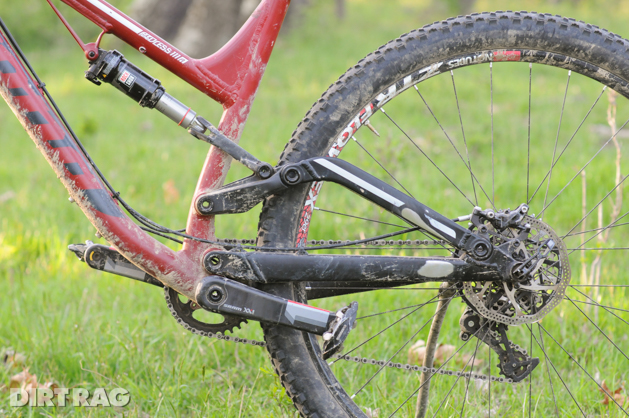 Looking at the stem and geometry, I expected this to be a bike that takes a good bit of time to get used to, but I was mistaken. Other than a swap to narrower 740mm bars, I felt at home from ride one.

The big wheels and short travel don’t feel too far away from a cross- country race setup, and with the bars set low, this machine can cover some serious ground and crush climbs. But drop the seat and that XC feeling goes away to reveal a precision trail assassin. The long top tube (25 inches on a large frame) and short stem place the rider farther back over the rear of the bike, and the short rear end keeps things playful even with a 46.2-inch wheelbase. The 68-degree head angle is not terribly slack, keeping steering responsive for such a stable bike. 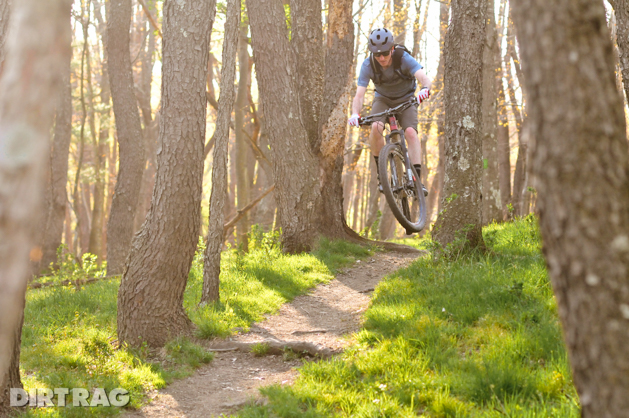 Kona’s no-nonsense Rocker Independent Suspension is a variation of the linkage-driven single-pivot shock design that has graced its bikes for more than a decade. The leverage rate is designed to match up well with modern air shocks, creating consistent feel throughout the travel. This should help riders become used to how the suspension will react, with no odd spikes, ramps, or hammock-y feel anywhere in the travel. 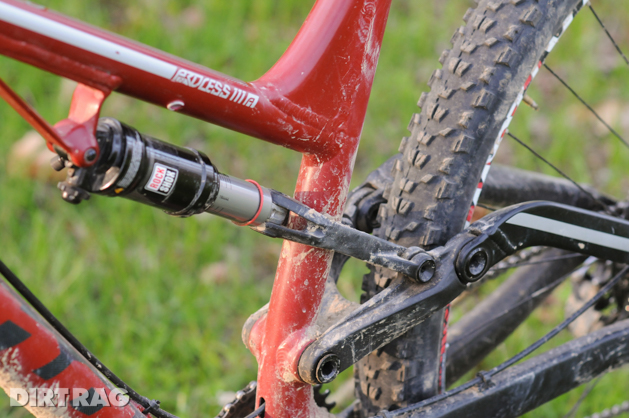 To be honest, with such short travel it was hard to really feel much of that going on, but I was very satisfied with the performance. Hard to bottom out, not too much bob, easy-to-access platform lever—I could just set it to the least amount of platform and ride it all day. It was nice, but not necessary, to have the option to lock it out for road sections and open it up fully for long descents. 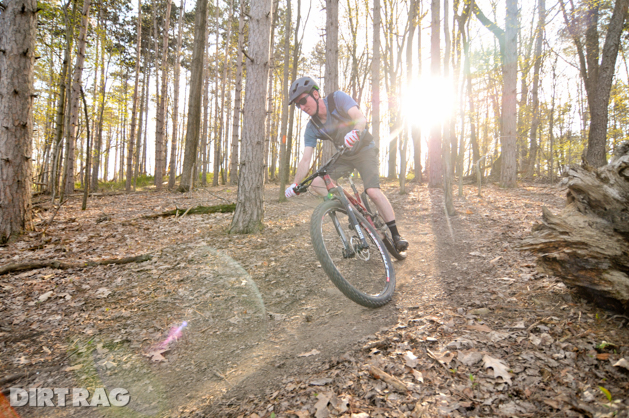 The aluminum frame looks big and burly, and looks do not deceive. This is a stiff frame—stiff enough to make the 32mm stanchioned fork feel a little overwhelmed at times—but in some ways that was part of the fun. I always felt obliged to take the big line, go harder and deeper into the next turn, and generally felt the bike had my back in finding the limits of aggressive riding.

That stiffness also pays off when climbing. The 29er wheels, efficient- feeling rear end, and somewhat aggressive seat-to-bar drop allowed me to tackle steep, tech climbs better than expected for a bike with such a short stem. Some adjustment to body positioning was needed to keep the rear tire biting and the front wheel down, but it was much more minor than I expected and better than many of the longer-travel 27.5 bikes I’ve been riding. The rear end stayed active enough to provide plenty of traction for climbing.

For such non-standard geometry, the Process had no issues just tooling around in the woods. I had to remind myself to keep some weight on the front end, but other than that, it was almost brainless to ride around at lower speeds. But crank up the pace on a rough descent and the Process comes alive.

The short travel and stiff frame provided great feedback, and the responsive geometry allowed me to steer my way to the best line or just pick the whole shebang up and drop it back down where needed. The short stays and short stem make the front end easy to get up, which is really never a bad thing. And in the lower-speed rock gardens that are common around Pennsylvania, the shorter travel is a huge plus, as the bike doesn’t wallow around in the travel and I was able to pick my way up, over, and through.

The only drawback I see here is the weight. Even with the high-end parts kit, the Process weighs almost as much as many longer-travel bikes. The weight didn’t really bother me, but it is going to take some money to make this thing any lighter.

All in all, the Process is a hell of an interesting bike for the right rider. When compared to the standard-issue modern trail and all-mountain bikes, the Process 111 might seem under gunned. But riders with an open mind will look past the travel and see that this is a bike capable of competing with bikes with longer travel while leaving them behind on less-technical sections of trail. 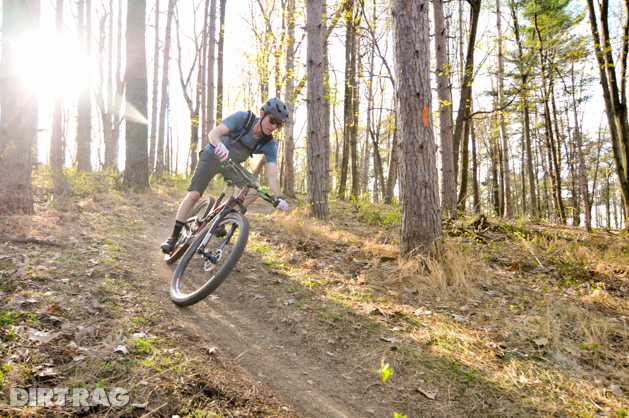